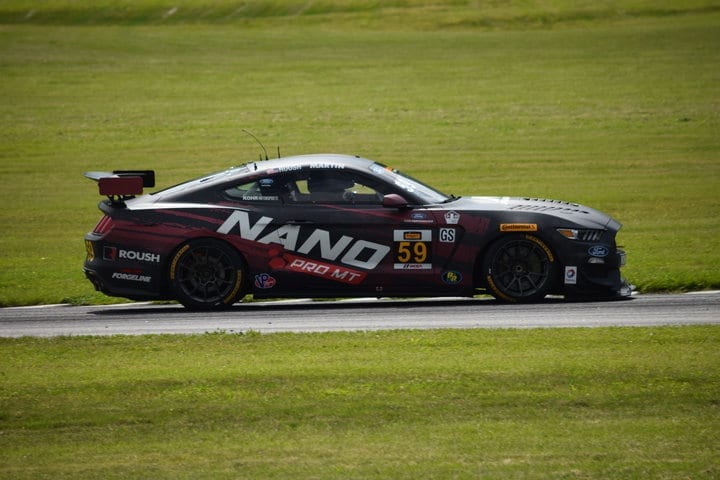 For the IMSA Continental Tire SportsCar Challenge, the Roar Before the 24 has showed that the “raw” Ford Mustang GT4 may be the car to beat in the BMW Endurance Challenge at Daytona.  KohR Motorsports’ Joey Atterbury was fastest in session No. 4 with a lap of 116.001 seconds (110.482 mph) in his No. 59 Ford Mustang GT4.

Atterbury’s lap was four-hundredths of a second faster than the Porsche of Rennsport One’s Dillon Machavern.  Brett Sandberg in the new Andrew Wojteczko Autosport (AWA) Mustang was third quickest, followed by Multimatic Motorsports’ Austin Cindric.  GMG Racing’s James Sofronas was fifth fastest in the No. 14 Audi.

In TCR, Pierre Kleinubing‘s stranglehold on the top spot on the charts was broken during session No. 4.  However, Kleinubing was beaten by his own teammate Rodrigo Sales.  Sales’ best lap of the session was 120.322 seconds (106.514 mph) was two-tenths of a second faster than Kleinubing in second.  JDC-Miller MotorSports’ Michael Johnson was third quickest in the No. 54 Audi, nearly 2.5 seconds off of Sales.

Unfortunately for Johnson, his session ended in the worst possible way.  Johnson’s Audi went head-on into the wall at turn 6, resulting in significant damage to the RS 3 LMS Club Sport.  The session was red-flagged as a result of the crash and ended early.  Johnson, a paraplegic who races via use of hand controls, was extricated from the car and taken to the Infield Care Center.  At last update, Johnson was transferred to a local hospital.  JDC-Miller MotorSports took to Twitter to give a brief update of the situation.

Update: During the second practice this afternoon at Daytona, Michael Johnson had an incident at turn 6. Michael is alert, talking and is being taken to the local hospital for a precautionary check.

UPDATE: On Monday, IMSA and JDC-Miller MotorSports announced that Johnson broke his right tibia and fibula in his crash on Saturday afternoon.  He has since undergone surgery for his injuries.  As of now, Johnson is currently resting and recovering.  He plans to return to the No. 54 Audi, but that return will likely be months away.

Street Tuner saw BimmerWorld Racing’s Devin Jones put the No. 81 BMW 328i on top of the sheet with a time of 125.456 seconds (102.155 mph).  That lap was eight-hundredths of a second faster than Mat Pombo in MINI JCW Team’s No. 37.  Murillo Racing’s Tim Probert was third quickest.

Results of IMSA Continental Tire SportsCar Championship Roar Before the 24 Session No. 4

Continental Tire SportsCar Challenge teams will have two on-track sessions Sunday at Daytona International Speedway.  The first of those sessions is scheduled to start bright and early at 9 a.m.  It is scheduled for 90 minutes.