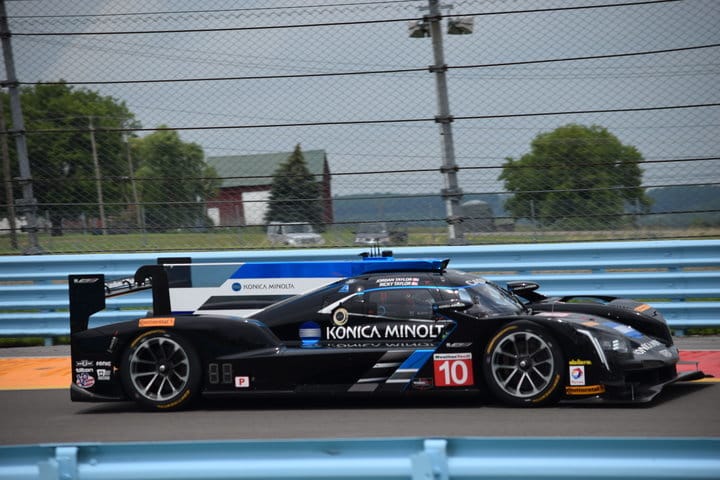 On Saturday afternoon, the Cadillac DPi-V.R. continued it’s run as the fastest car in town at Daytona.  This time, it was Wayne Taylor Racing’s Jordan Taylor who managed to put his Cadillac on top of the charts.

CORE autosport’s Colin Braun was fastest of those in the Global LMP2 chassis with a lap of 97.537 seconds (131.396 mph), good enough for third overall.  Action Express Racing’s Mike Conway was fourth quickest, while JDC-Miller MotorSports’ Stephen Simpson rounded out the top five.

Joao Barbosa was sixth quickest in Action Express Racing’s No. 5 Cadillac, followed by Patricio O’Ward in Performance Tech Motorsports’ No. 38 ORECA 07-Gibson.  After struggling for pace on Friday, the Deerfield Beach, Fla.-based team is coming to terms with their new mount.  Tequila Patron ESM’s Pipo Derani moved up to eighth on the chart with his final lap of the session, while the two Jackie Chan DC Racing JOTA ORECA 07-Gibsons rounded out the top 10.  Felix Rosenqvist was ninth in the No. 37, followed by Ho-Pin Tung in the No. 78.

Despite Cadillac’s dominance at the top of the charts, the field is relatively close together.  The top 10 cars in the session were separated by just over eight-tenths of a second.

In GT Le Mans, Ford Chip Ganassi Racing IMSA’s Scott Dixon was fastest with a lap of 104.282 seconds (122.898 mph).  That lap was just over one-eighth of a second quicker than Dirk Müller in the No. 66 Ford.  Risi Competizione’s Alessandro Pier Guidi was third fastest in the Ferrari, followed by Corvette Racing’s Oliver Gavin.  Porsche GT Team’s Laurens Vanthoor rounded out the top five.

The close competition remains a constant in the GTLM class.  The top seven teams were separated by less than two-thirds of a second.  The BMW M8 GTEs from BMW Team RLL are still not quite on pace as compared to the rest of the class.

In GT Daytona, Manthey Racing’s Matteo Cairoli was fastest with a lap of 107.125 seconds (119.636 mph).  The lap was two-hundredths of a second off the best overall GTD time from Friday, set by GRT Grasser Racing Team’s Rolf Ineichen.

Ineichen continued to show his good pace Saturday by turning in the second fastest time in the class, four-tenths of a second slower than Cairoli.  Paul Miller Racing’s Andrea Caldarelli was third fastest, followed by Spirit of Race’s Daniel Serra.  Michael Shank Racing with Curb-Agajanian’s Lawson Aschenbach was the quickest regular in fifth, just one-thousandth of a second faster than Magnus Racing’s Andy Lally.

The session had one short red flag due to 3GT Racing’s Kyle Marcelli stopping on-course late in the session.  There was a brief interruption so that Marcelli’s Lexus could be retrieved before the session could resume.

Results of IMSA WeatherTech SportsCar Championship Roar Before the 24 Session No. 3

WeatherTech SportsCar Championship teams have two more practice sessions on Saturday.  Roar Session No. 4 is scheduled to begin at 3:30 p.m. and will last for 45 minutes.