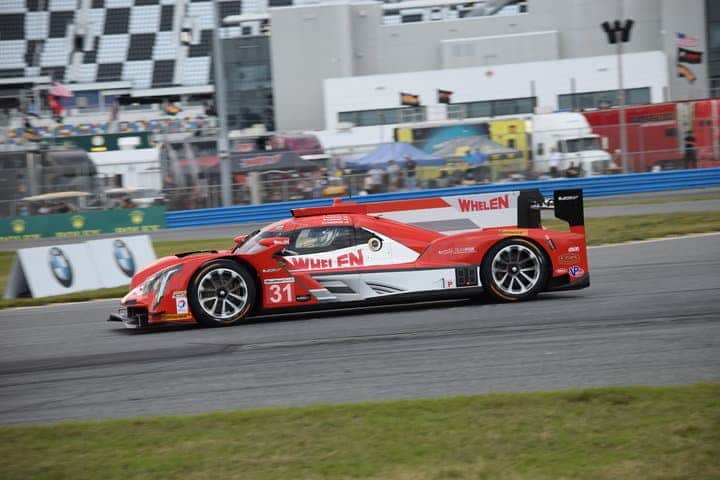 In an attempt to ward off sandbagging, IMSA instituted a qualifying session during the Roar Before the 24 that will set garage and pit stalls assignments.  Even before the session, IMSA parked a couple of GT Daytona teams for holding back during night practice on Saturday.  With the impetus to put up or shut up, Action Express Racing’s Felipe Nasr did just that and way more.

On his final lap of qualifying Sunday morning, Action Express Racing’s Felipe Nasr turned in a lap of 95.806 seconds (133.770 mph) to top the charts.  That lap is 1.1 seconds faster than last year’s pole time and faster than any other pole time at Daytona since the Camel GTP class was nixed at the end of 1993.

The lap was nearly a quarter of a second faster than Spirit of Daytona Racing’s Tristan Vautier in second.  Filipe Albuquerque was third fastest, while Wayne Taylor Racing’s Renger van der Zande completed the top four sweep for Cadillac.  Acura Team Penske’s Dane Cameron was the fastest non-Cadillac DPi-V.R. in fifth, nearly 1.2 seconds off the pole.

In GT Le Mans, the times tumbled downwards as well, though not quite as dramatically as they did in the Prototype class.  Ford Chip Ganassi Racing IMSA’s form from the past two days held as Joey Hand put the No. 66 Ford GT on the class pole with a lap of 103.610 seconds (123.695 mph).  It is the fastest GTLM lap at the Roar.

Despite Hand’s speed, his lap was a mere three-hundredths of a second faster than Corvette Racing’s Oliver Gavin.  Ryan Briscoe in the No. 67 Ford was third quickest, followed by Laurens Vanthoor in the fastest of the Porsches.  Corvette Racing’s Antonio Garcia rounded out the top five.

Porsche GT Team’s No. 911 for Patrick Pilet did not set a time in the session.  Of those who did set times, the top six GTLM teams were separated by a mere three-sevenths of a second.

In GT Daytona, the GRT Grasser Racing Team kept up the pace that they’ve shown all weekend.  However, unlike the other two classes, the speeds were down a little bit.

Lamborghini factory racer Mirko Bortolotti put the No. 11 Lamborghini Huracan GT3 on pole with a lap of 107.374 seconds (119.359 mph), roughly three-tenths of a second slower than the fastest time of the Roar.  Bortolotti’s time was six-hundredths of a second quicker than Magnus Racing’s Andy Lally.  Wright Motorsports’ Patrick Long was third quickest, followed by Michael Shank Racing with Curb-Agajanian’s No. 86 for Àlvaro Parente.  Rounding out the top five was HART’s Ryan Eversley in the No. 69 Acura.  The HART squad, constituted of Honda engineers from Ohio, has made great strides in their first attempt at the GTD class.

3GT Racing’s Jack Hawksworth was sixth fastest in the best Lexus, followed by Scuderia Corsa’s Alessandro Balzan.  Montaplast by Land-Motorsport’s Kelvin van der Linde was eighth, followed by Max van Splunteren in the second GRT Grasser Racing Team Lamborghini.  Risi Competizione’s Miguel Molina rounded out the top 10.  18 of the 19 cars that took time in the session were within a second of Bortolotti.

Of those teams busted for sandbagging Saturday night, the No. 93 Michael Shank Racing with Curb-Agajanian Acura driven by Lawson Aschenbach ended up 12th on the chart.  The other team docked practice time was P1 Motorsports’ Mercedes.  Team owner/driver JC Perez was the slowest qualifier to set a time Sunday morning.

Two teams failed to set times during the session.  The surprising team here was Manthey Racing’s No. 59 Porsche, which had been right up near the top of the charts for most of the weekend.  The other was Paul Miller Racing’s No. 48 Lamborghini.

Results of IMSA WeatherTech SportsCar Championship Roar Before the 24 Qualifying

By rule, IMSA can make changes to the Balance of Performance between the Roar Before the 24 and the Rolex 24 at Daytona.  Given the fact that no one that wasn’t in a Cadillac DPi-V.R. was within 1.2 seconds of pole Sunday, changes could be coming.  Stay tuned.

WeatherTech SportsCar Championship teams have one more practice session before they load up to head back home.  That session is scheduled for 2:45 p.m. Sunday afternoon and will last for an hour.