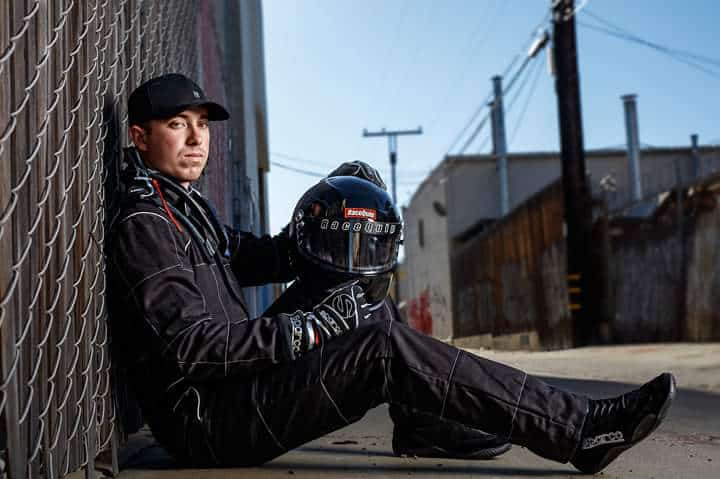 The average racecar driver balances a normal, paycheck-to-paycheck job to support his or her ultimate goal of making the Monster Energy NASCAR Cup Series.

22-year-old Matt Perry balances something a little different. Yes, he spends his weeks working as a valet driver, but his third hat is one that truly makes him stand out in the racing world.

Now, the native of Saint Mary’s, Georgia, is eying his next challenge: a career in NASCAR. What an adjustment, right?

And wouldn’t you know, it all got started following a conversation with fellow Navy serviceman and K&N Pro Series West driver Jesse Iwuji. For Perry, the relationship has eased the transition into racing.

“I met up with Jesse and I thought, if he’s in the Navy and can do it, maybe I can try this as well,” Perry told Frontstretch. “We are chatting one day, he’s like, ‘Come race for Patriot.'”

Iwuji started racing K&N West for Patriot Motorsports Group in 2015. The team fields cars in the K&N East and West series along with late models and modifieds in the Whelen All-American Series.

Perry saw the team as a great home to start his career, making his first late model start in September 2017 at Meridian Speedway. Overcoming a practice wreck, Perry finished ninth, a run that made him ambitious to get back behind the wheel.

“The opportunity was available for me to move forward with my dream,” he said. “Going from racing go-karts at CalSpeed Karting all the way up to racing super late models, it’s a tremendous improvement. The guys at Patriot have been great at sitting down and helping me navigate the track and learn the car. Between trying different lines, different gas and braking points, I’ve noticed a huge improvement in my driving since.”

Fighting similar battles the average racer must face with sponsorship searching, Perry learned a few things from the Navy that tie closely with motor racing.

“2017 was a struggle with the lack of sponsors,” he said. “There was a time over the summer I was working close to 60 to 90 hours a week just to be able to pay for that out of pocket. I had a few friends who helped pitch in. It was a tremendous job.

“It’s important not only to bring what the Navy has taught me — to work with distress, time management — but team-building as well. Coming right into it felt very familiar to the military lifestyle because Jesse has worked with the guys for so long now, it all feels like home. Bringing it into the sport, it’s a tight-knit group here.”

It didn’t take long before Iwuji knew Perry was willing to put the effort in to make it to the track.

“He’s always demonstrated his passion for racing,” Iwuji said. “When he approached me about becoming a driver, I connected him with my race team to make it happen.

“It’s great to see more military members being empowered to step up and follow their dreams. He did the hard work by finding the funding and he began chipping away at making his dreams come true just like I did.”

Perry’s 2018 plans with Patriot include returned action in late models and modifieds in the NASCAR Whelen All-American Series. To top it off, he plans to make his K&N West debut at Meridian come September, also eying the series’ visit to Colorado National Speedway in June.

“Top of my list is trying to make Meridian,” he said. “I want to get as many races in as I can to prepare for K&N.”

Motivation, as present as it is on his social media channels, is part of Perry’s agenda in his racing career. With a small-town background, Perry wants to show that anyone can make it if they put the effort in.

“I come from a small town in Georgia and you don’t see many people move out of the town,” Perry said. “I hope coming from that small-town atmosphere, dirt tracks at 6 years old, I hope it inspires younger children to strive for their dream no matter how big.”

Reminds me of Earnhardt who would do anything to race. It would be awesome if the navy or army would step up and give him a sponsorship. I wish this man the best in achieving his goal.