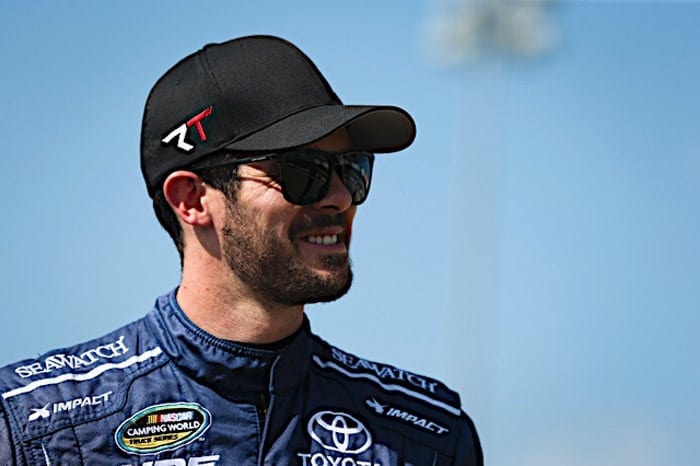 A week after it was announced that he would not be returning to Hattori Racing Enterprises in the NASCAR Camping World Truck Series for 2018, Ryan Truex picked up a new full-time ride in the XFINITY Series.

The move marks Truex’s first foray into the series on a full-time basis. He has, however, competed in 39 races since 2010, scoring two top fives and nine top 10s. His most prolific season was 2011, when he started half of the 34 races with both Pastrana Waltrip Racing and Joe Gibbs Racing.

“I’m extremely excited to be making the move back into the XFINITY Series,” Truex said in a press statement. “In just two years Kaulig Racing has proved to be a highly competitive team each race and it should be a great fit. Last season I saw a lot of improvements in my racing and hopefully this year I can continue the success Kaulig Racing has built and compete for the championship at the end of the year.”

Truex moves up from Hattori’s No. 16 in the Truck Series, where he completed a full-time NASCAR national series schedule for the first time in his career. He finished ninth in points with eight top fives and 13 top 10s, including two poles.

“When we started this team two years ago I knew we had the potential to be one of the strongest teams in the XFINITY Series, and I think we’re within reach of that goal,” team owner Matt Kaulig added. “Ryan is going to be a great addition to the team, and I have some high hopes for this season. Each year we keep improving as a team, and I think this season we’ll be able to get some wins and make another run in the playoffs. Everyone at Kaulig Racing is excited to have Ryan on board, and it should be a great, fun year.”

He takes over for Blake Koch, who piloted Kaulig’s No. 11 over the past two seasons, since its expansion into NASCAR. In that span, he finished in the top 10 five times each season and was part of the playoffs both years, his best a seventh-place finish in the 2016 standings.

Koch has not announced his plans for the 2018 season. Meanwhile, Hattori’s No. 16 plans to continue full-time in the Truck Series in 2018, though it is also searching for a driver.

Late Tuesday morning, Kaulig told SiriusXM NASCAR Radio that his organization plans to expand to a two-car effort in 2018. No announcement has been made, though, about a second car.