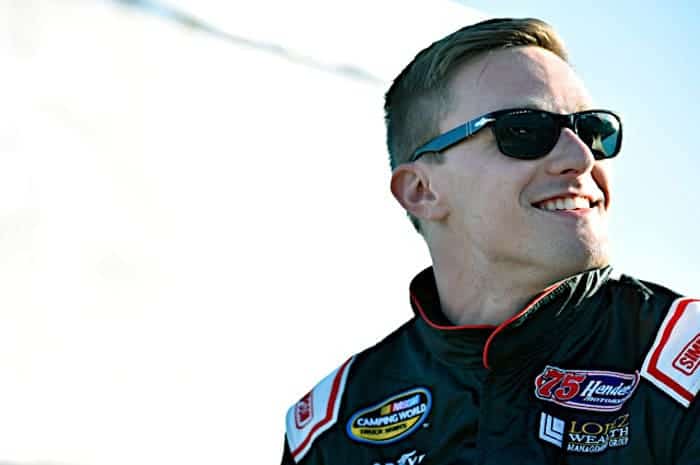 Parker Kligerman wears multiple hats these days. Not only is he a racecar driver, but he also frequently plays the role of analyst for NASCAR on NBC.

Kligerman is still hanging onto his original hat, though. The two-time NASCAR Camping World Truck Series winner will be returning for a part-time schedule with Henderson Motorsports in 2018, piloting the No. 75 truck for the second year in a row.

“We’ll be at Daytona [International Speedway] and Atlanta [Motor Speedway],” Kligerman said. “Then, through the whole season, we’ll do somewhere between eight to 10 races, depending on how it goes. We’re looking forward to that. We’ve done some things over the off-season to improve, and I think you’ll see some of those announcements at end of January. It’s all coming together nicely.”

With crew chief Chris Carrier and team owner Charlie Henderson leading the way, the pressure of winning is gone and the focus is on 2018.

“The Hendersons, myself and Chris, we’re all just a big family,” Kligerman said. “There’s no contracts. There’s no politics or anything. We just build the best racetruck we can, I drive the best I can and we go out and see if we can win a race. It’s very fun and gratifying.”

The 27-year-old earned Henderson Motorsports its first Truck Series triumph in 2017, winning at Talladega Superspeedway in October. The victory was one that culminated his latest NASCAR experience, dating back to sitting on the sidelines for the majority of the 2015 season until he returned in 2016 with Ricky Benton Racing’s No. 92 squad.

By the end of the 2016 season, he switched gears and joined the No. 75 team. After missing the race at Talladega that year due to a brake issue in qualifying, the team began to focus on 2017. When the team arrived at Daytona for the season-opener, it looked like all was well. But that wasn’t the case.

“We go out to qualify and the main shaft breaks in qualifying,” Kligerman said. “When we went to Atlanta, the joke was our goal was just to make the race. When we made the race, we were a top-five truck, and we were moving up nicely until we had an issue with the fuel cable.”

While the Connecticut native has worked for the likes of Brad Keselowski Racing, Team Penske and Kyle Busch Motorsports, the intimate experience of working with a smaller organization has provided a more relaxed environment. Now he can take the lessons he learned from those larger teams and focus on the keys to success.

“The biggest reason a small team in trucks could have success and why Chris Carrier and myself can improve things is because when you’ve been part of the biggest teams in the sport, you’ve seen all the stuff they do with the minute details, you start to realize there are core basics,” he said. “If you focus on those, you can run well enough to put yourself in position to win races. When you do that, you’re going to win a race. We don’t do anything too far-fetched or extraordinary. We execute and go out to win a race. There’s no master map or road map to success.”

Kligerman was not able to comment on what he will be doing for NASCAR on NBC in 2018 but did say it is the “status quo.”

Besides serving as an analyst on NASCAR America, he also was a pit reporter for multiple Monster Energy NASCAR Cup Series and XFINITY Series races. He also hosts a podcast with Carolyn Manno.

So pleased to hear that Parker has a ride for 18/19. I have listened to interviews of him, and I have to say I think he is one of the most humble and hardest working racers out there. I think he is willing to do whatever it takes to be in the sport, either on track or off. Of all race analysts/pit reporters/commentators, he really is one of the best. This guy does his homework; always well-informed great analysis and commentary. I wish him much success both on and off the track.