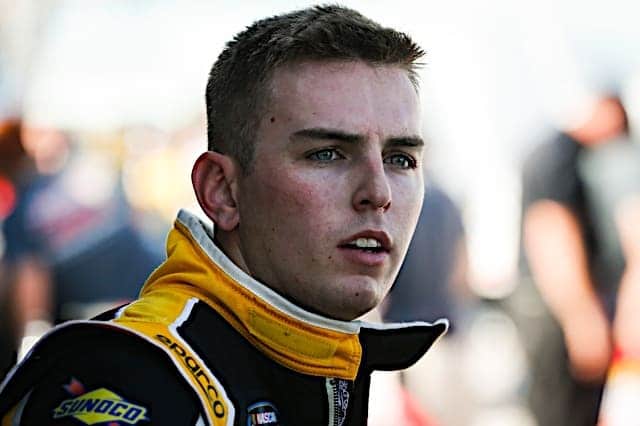 Friday morning, GMS Racing announced the signing of Dalton Sargeant to race for Rookie of the Year in NASCAR’s Camping World Truck Series in 2018.  The 19-year-old will drive the team’s No. 25 Chevrolet.  In addition, GMS Racing announced the signing of Doug Randolph to serve as Sargeant’s crew chief.  Randolph most recently served as Austin Cindric‘s head wrench at Brad Keselowski Racing before BKR closed their doors.

Sargeant is very pleased about making the move to the Truck Series full-time.

“I’m really excited to be joining a championship-caliber team in GMS Racing for the 2018 NASCAR Camping World Truck Series season,” Sargeant stated.  “Mike Beam and everyone at GMS Racing has put so much effort into this No. 25 team during the offseason and I can’t thank them enough for this opportunity.  GMS Racing has put together an all-star team of people and equipment, plus had faith in me to drive and compete for wins.  I’m looking forward to what we can accomplish in 2018.”

Sargeant has six career Truck Series starts.  His series debut came in 2015 at Bristol Motor Speedway with Wauters Motorsports, scoring a top-10 finish.  That was followed up by a ninth at Loudon a month later. However, the No. 5 team could never find proper sponsorship for the teenager to compete full-time.

Last season, Sargeant drove the final two races of the season in MDM Motorsports’ No. 99 Chevrolet.  The better of those finishes was a 17th at Phoenix.  However, Sargeant’s race there ended up against the wall after a highly unusual attempt to race six-wide.

In addition to his two Truck starts last season, Sargeant also competed full-time in the ARCA Racing Series presented by Menards for Cunningham Motorsports.  Taking over for 2016 champion Chase Briscoe, Sargeant scored three wins (Salem, Iowa, and Lucas Oil Raceway at Indianapolis), 10 top-five and 18 top-10 finishes on his way to a second-place finish in the point standings.

That paved the way for a return to NASCAR. Now, this teenager hopes his success can transfer over into the next level of stock car competition.

“It’s always been a dream and a goal to compete at this level in NASCAR,” he said. “I left a career and a life in Europe to compete against the best in NASCAR and today is that day.  We have a full slate of things coming up as a team and I know we’re all really looking forward to getting on the track and beginning the season.”

GMS Racing did not announce any sponsorship for Sargeant’s No. 25 Chevrolet in the team’s press release.  Sargeant’s first time in GMS Racing equipment is scheduled to be at an open test session at Charlotte Motor Speedway in the coming weeks.