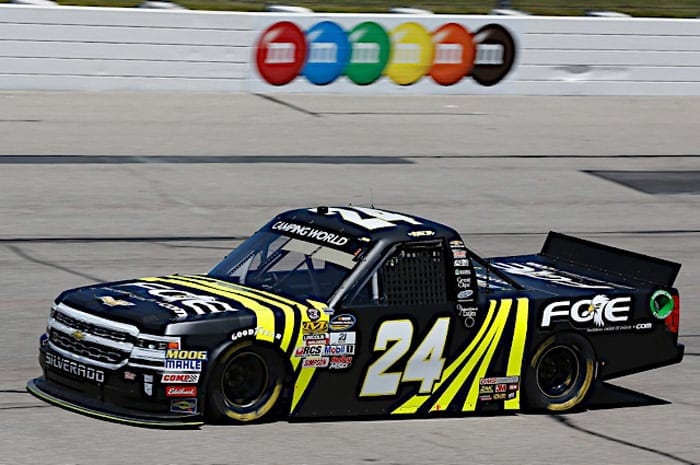 On Monday, GMS Racing announced that Justin Haley will return to the team for his second Camping World Truck Series season in the team’s No. 24 Chevrolet in 2018.  Sponsorship will be provided by the Fraternal Order of Eagles.  Kevin Bellicourt will remain as Haley’s crew chief.

“We found a lot of success toward the end of the 2017 season, so there’s a good amount of momentum that we can carry over into this year,” Haley stated.  “The No. 24 team is working hard in the off-season to take us to that next level, to be able to keep running up front and improving week to week.  There’s no reason we shouldn’t be competing for a championship when we get to Miami, and I couldn’t be more excited to be heading in that direction with GMS and the Fraternal Order of Eagles.”

2018 will be Haley’s first opportunity to race the full Camping World Truck Series schedule.  Since his birthday is not until Apr. 28, he was unable to participate in the first two races of the 2017 season due to NASCAR’s minimum age rule for superspeedways.  However, in 21 starts, Haley had three top five and 12 top 10 finishes.  His best finish was a third at Kentucky in July.  The missed races resulted in Haley finishing 12th in points.

In addition to Haley’s Camping World Truck Series schedule last season, he also ran in three ARCA Racing Series presented by Menards events.  He won at Talladega in April for MDM Motorsports while trying to get approved for his first restrictor plate truck race.  He also won the June race at Pocono Raceway for Mason Mitchell Motorsports.