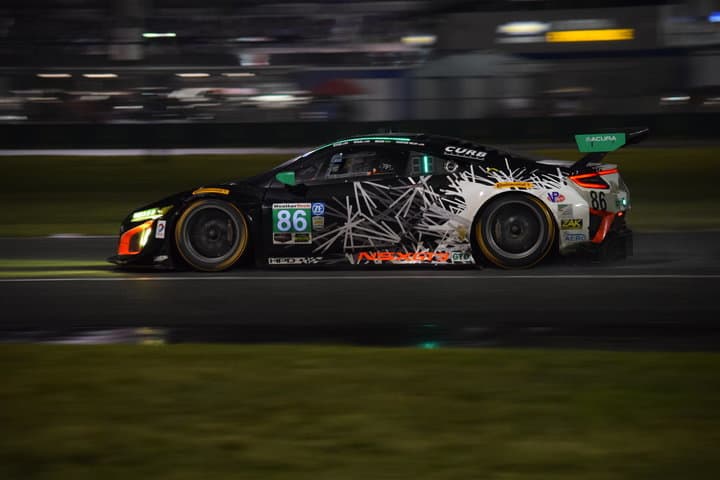 On Wednesday, IMSA released the official entry list for the 56th running of the Rolex 24 at Daytona.  As per IMSA rules, all teams that planned on entering the Rolex 24 at Daytona had to participate in the Roar Before the 24.  As a result, there are no surprises in regards to the teams entered.  There are still 50 cars spread out among the three classes.

In Prototype land, there are once again 20 entries.  However, there have been a couple of changes.  Joel Miller, who drove for BAR1 Motorsports during the Roar, has been added to the driver lineup at Performance Tech Motorsports.  There, Miller will join up with James French, Kyle Masson and Patricio O’Ward.

At BAR1 Motorsports, currently only two drivers are listed.  Marc Drumwright, who drove the team’s Riley Mk. 30-Gibson during the Roar, will be joined by Eric Lux.  Expect additional drivers to be announced over the next few days.

In GT Le Mans, there are still only nine entries.  Most of the driver lineups were on hand at the Roar.  However, Risi Competizione had Alessandro Pier Guidi do the test solo.  He’ll be joined by AF Corse regulars James Calado and Davide Rigon, in addition to longtime Risi driver Toni Vilander.

In GT Daytona, there is clarification of the driver lineup at 3GT Racing.  Full-time drivers Dominik Baumann and Kyle Marcelli will be joined by Philipp Frommenwiler and Bruno Junqueira in the No. 14 Lexus.  Scott Pruett will start his final professional race in the No. 15 alongside Dominik Farnbacher, Jack Hawksworth and David Heinemeier Hansson.

Risi Competizione has added a fifth driver to their No. 82 Ferrari, and he’s a good one.  Irish racer Matt Griffin will be part of the driving lineup.  Griffin competed full-time in both the FIA World Endurance Championship and the European Le Mans Series in 2017 in Ferraris.  In the WEC, Griffin finished third Endurance Trophy for LMGTE Am Drivers points with one victory (Silverstone) and six podium finishes.  In ELMS, Griffin’s Spirit of Race No. 55 ended up fourth in the LMGTE Teams Championship despite winning two races (Red Bull Ring and Paul Ricard).

Finally, Turner Motorsport has a new driver lineup to go with their recently announced primary sponsorship from LIQUI MOLY.  Jens Klingmann returns to the No. 96 BMW, but he’s joined by a couple of GT newcomers in Mark Kvamme and Don Yount.  Both Kvamme and Yount have previously been teammates at BAR1 Motorsports in the now-disbanded PC class.  Martin Tomczyk, who most recently raced for BMW Team RLL alongside John Edwards, will round out the lineup.

AJ Allmendinger doesn’t get a mention in the article, hmmm.