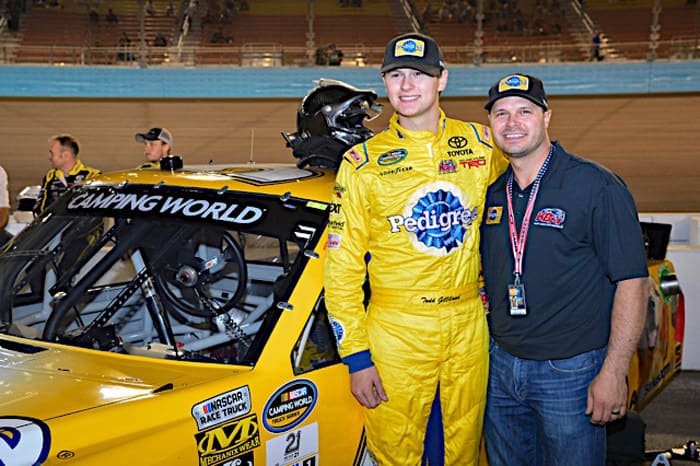 Todd Gilliland is set to compete for Rookie of the Year honors in the Camping World Truck Series in 2018, fresh off back-to-back NASCAR K&N Pro Series West championships.

The 17-year-old will run the No. 4 truck for Kyle Busch Motorsports in 19 events, skipping four of the first six races due to not being of age to compete at intermediate tracks and superspeedways. Gilliland will race at Martinsville Speedway in March and at Dover International Speedway in May before officially taking the reigns of the entry starting at Charlotte in May.

“With back-to-back championships in the K&N West Series the last two seasons and a runner-up finish in the East Series this year, Todd’s proven that he knows how to win races and compete for championships,” team owner Kyle Busch said in a statement. “He showed improvement over the course of his six-race schedule last year and after he turns 18 in May and is able to get behind the wheel on a regular basis, we expect that he will continue to improve, start competing for wins and be a strong contender for the Truck Series Rookie of the Year.”

I couldn’t be more excited about filling in for @ToddGilliland_ @KBMteam at Daytona. Super special to share a ride with you son!!! #thankskyle thank you @ToyotaRacing

The veteran racer has 332 Cup races on his resume, along with 56 XFINITY Series races and 10 Truck Series contests. His last Truck Series start came in 2015, when he ran seven events with Ricky Benton Racing in the No. 92 truck, a stint that included a pair of top 10s.

He will also attempt to qualify for the Daytona 500 with RBR, which will try to make its Cup Series debut. The organization never competed in a Cup race before, and will have its Truck Series partners on board for the Great American Race.

“I’m really excited to be running Daytona and sharing the truck with my son Todd, which is really special,” the elder Gilliland said in a release. “To drive for KBM with all the success they have had over the years is a fantastic opportunity. Kyle is a great guy and I’m sure that he can teach Todd and I both, so we can’t wait to get to the racetrack.”

Busch will also compete in a pair of races in the vehicle. He’ll be behind the wheel at Atlanta Motor Speedway and at Kansas Speedway, with no driver named for Las Vegas Motor Speedway in March.

The younger Gilliland competed full-time in both the K&N Pro Series East and West in 2017, nearly winning both titles. With a total of 10 wins in 24 races for Bill McAnally Racing, he had a combined average finish of 3.45. In the East division, he was set to win the championship until a crash in the season-finale at Dover put an end to his title hopes, enabling Harrison Burton to capture the title.

“I’m super excited be continuing my development within the Toyota Racing family and look forward to being behind the wheel of KBM’s No. 4 Tundra this season — especially after my 18th birthday when I can run all of the races,” Gilliland said. “I’ll still be at the track for the early races when I don’t get to compete so that I can learn as much as I can from being around the guys on the team and watching my Dad and Kyle before my first 1.5-mile race at Charlotte.”