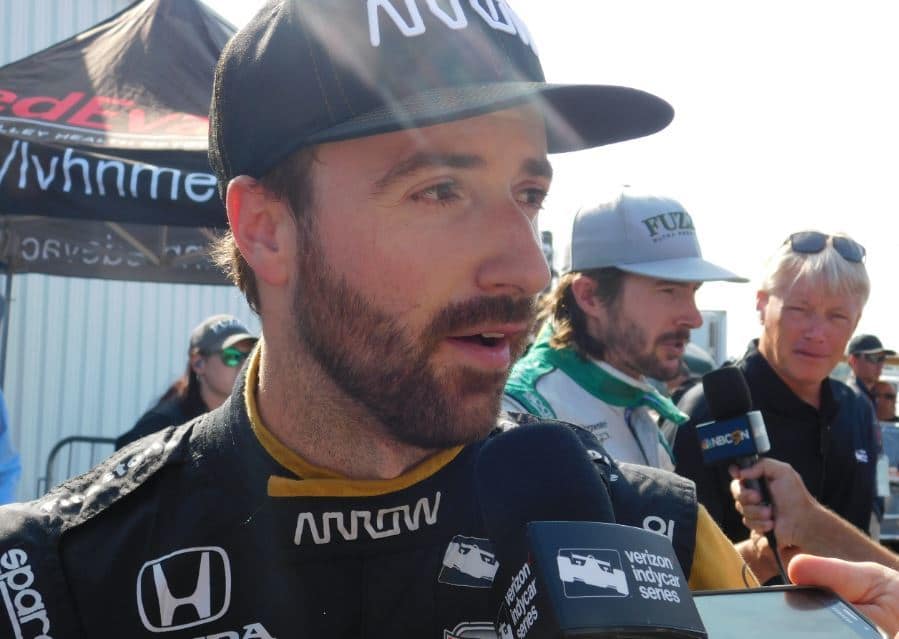 Entering his third season with Schmidt Peterson Motorsports, James Hinchcliffe looked to end a winless drought that began in April 2015.

In race No. 2 of the 2017 IndyCar Series season, that drought came to an end when Hinchcliffe won the Toyota Grand Prix of Long Beach after qualifying fourth and leading 25 laps. It was the fifth victory of his career.

After three races, Hinchcliffe sat fifth in the standings, while Mikhail Aleshin was 12th. Aleshin started the season without much thrill as he earned finishes of 14th, 12th and 10th.

Aleshin, who’s known as a fearless and aggressive driver on the ovals, entered the fourth event of the year at ISM Raceway with much excitement. Although he wasn’t a favorite to win the Phoenix Grand Prix, he qualified a respectable seventh.

The excitement didn’t last half a lap though, as he spun out in Turn 2 on the first lap, causing a five-car accident. He ended up with a 17th-place finish and sat 15th in the standings.

Aleshin ran into further trouble when the series visited Road America in late June. He was traveling back to the U.S. when a visa issue kept him in France longer than expected. He was in Europe for the running of the 24 Hours of Le Mans. Robert Wickens subbed for Aleshin on Friday practice, and he finally made it to Road America on Saturday morning.

Aleshin ended up finishing 10th after starting 19th at the Wisconsin road course.

At Toronto, Hinchcliffe’s home track, he graced the Canadian fans with a third-place finish. However, Sebastian Saavedra piloted the No. 7 Honda instead of Aleshin. He finished 11th.

Aleshin would run only one more race with SPM. He competed at the Mid-Ohio Sports Car Course and finished 14th. For the final four events of the season, Saavedra and Jack Harvey ran two races apiece.

SPM’s strongest performances of the year came on the street courses. Aleshin’s best finish of 2017 came at The Raceway at Belle Isle, where he finished sixth in Race No. 1. Hinchcliffe finished no worse than third in all but two street races. At St. Petersburg, he led 21 laps but was relegated to ninth because of an untimely caution. In Race No. 2 at Belle Isle, an engine failure caused him to finish 20th after starting fifth.

For 2018, Wickens will be the full-time driver of the No. 7. Hinchcliffe will continue his duties as the No. 5 driver. On Tuesday, SPM announced the hiring of Leena Gade, who will be the race engineer for Hinchcliffe. She worked for Audi and won three 24 Hours of Le Mans with the team.

“I’m really honored that I’ve got a chance to come across and work in IndyCar,” Gade said. “When I was a kid, I used to watch IndyCar, especially when Nigel Mansell first came over, and I followed it quite a lot.

“It is going to be something completely different to anything I’ve ever done before, so it’s a big learning curve, but it’s a challenge that I’m really relishing.”

SPM will get to test out the new aero kit at Sebring International Raceway on January 24th.