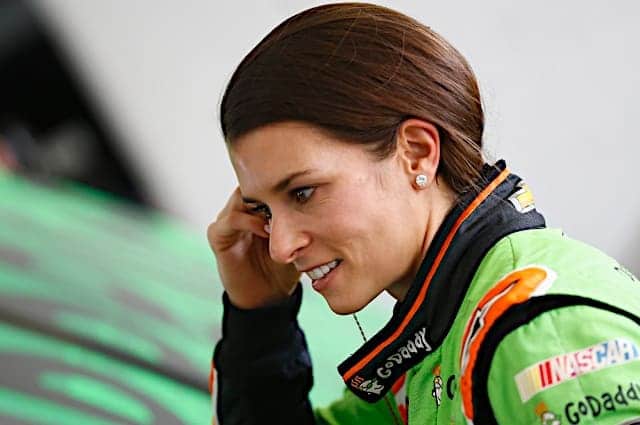 Danica Patrick announced that she will once again team with GoDaddy for her final two career races.  In a program that will be referred to as the “Danica Double,” Patrick will compete in the Daytona 500 and Indianapolis 500 in the familiar green colors of GoDaddy, the world’s largest internet domain registrar and web host.

Patrick is thrilled to have a loyal sponsor back by her side for her final rides.

“This is definitely the way I want to finish my racing career – at these two iconic races, backed by my iconic, long-time sponsor,” Patrick stated.  “GoDaddy was there for me when my career was just really starting so it’s exciting to be getting back in the GoDaddy ‘green’ for my final two races.  Our brands have always been powerful together, and I think it’s awesome to have them at my side when I go ‘all in’ with my businesses after racing.”

Indeed, Patrick’s new relationship with GoDaddy is not just race sponsorship.  According to the press release, GoDaddy will support Patrick’s post-career online presence.  That presence will be based around Patrick’s ongoing business ventures.  Those businesses include her Warrior clothing line, her vineyard and her recently published book, Pretty Intense.

GoDaddy is very happy to reconnect with Patrick.

“You could say, ‘we’re getting the band back together,” said Barb Rechterman, GoDaddy’s Chief Marketing Officer.  “It makes sense in that our goals are so well-aligned – she’s passionate, tenacious and creative just like so many of our customers who are also looking to leverage the power of the Internet and turn their ‘side hustle’ into a full-time business.  Danica absolutely epitomizes the heart of our GoDaddy customers.  We love it.”

The GoDaddy of today is quite a bit different from the company that sponsored Patrick.  Under the leadership of founder Dr. Bob Parsons, GoDaddy was rather infamous for its salacious commercials advertising services that often implored viewers to check out the ending on their website.  Patrick starred in a number of those ads, including 13 that aired during the Super Bowl.  Parsons stepped down as CEO when the company issued an IPO and went public.  Since then, the public image of the company has been much softer.

No announcements were made regarding which team or teams that Patrick will drive for at either Daytona or Indianapolis.  However, with primary sponsorship in her back pocket, Patrick will be able to fully fund whatever ride she can muster.

All right! This is great! What a perfect way for Danica to finish her NASCAR career.

Once again this will be good for the sport. A positive story to watch, as opposed to the negative situations that other sports present every week.
Also when Danica finishes mid pack, it will show that her SHR cars were not the top notched championship caliber machines that her haters said they were.
Please have some sexy, risque commercials for us to watch during the race.