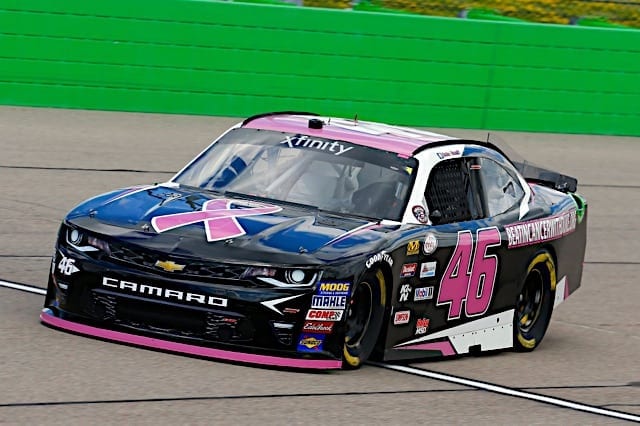 After three years of existence and 18 races later, Richard Gdovic, owner of Precision Performance Motorsports has decided to close the doors on an XFINITY Series entry.

Heading into the 2017 season, Gdovic had set out to run the entire 33-race schedule, kicking it off with a 22nd-place finish at Daytona with Anthony Kumpen. Quin Houff recorded a pair of top-15 finishes at Bristol Motor Speedway (15th) and Iowa Speedway (12th) before Parker Kligerman picked up the organization’s lone top-10 finish in its existence at Road America in August. The team competed in just 10 races last year, failing to qualify at Kentucky Speedway and the season finale at Homestead-Miami Speedway.

Gdovic confirmed to Frontstretch that over the off-season the team is moving in a different direction with son, Brandon Gdovic.

“We have shut down the XFINITY program and have sold about half of our cars and related parts and equipment to date,” Gdovic said. “We enjoyed our time in NASCAR, he [Brandon] has presented me with a business plan for Sports Cars that makes more sense financially and also supports his passion for sports cars and representing Lamborghini.”

“I actually sold the team through an investment broker at the beginning of 2017, but unfortunately their investors fell through,” he said. “It was the right time to exit NASCAR for our team. It is a difficult business model even though we enjoyed some success with drivers paying us to drive our cars in 2017.”

Gdovic admitted that the rest of the garage knows that the team has good equipment, so the selling process hasn’t been difficult. He also mentioned that he has no desire to re-enter one of NASCAR’s top three series, as his focus has turned to his son’s career.

“NASCAR is similar to any other successful business that continues to change with the times,” Gdovic said. “We enjoyed our time there, but are dedicated to the Sports Car path for the foreseeable future and do not see re-entering the upper tiers of NASCAR anytime soon.”

Over the years, NASCAR has become more heavily dependent on sponsorship dollars year after year. For PPM, it was no different, thus why the team competed in only a limited amount of races over three years.

“I don’t think people realize from the outside looking in the ongoing challenging model it is because there’s not enough money that you’re going to win that’s going to offset your cost to race, especially if you’re trying to win,” Gdovic said of NASCAR’s business model. “It looks good when the payout is $100,000 to win, but the amount of money you have to spend and infrastructure to win that amount of money makes for a tough model if you don’t have significant outside sponsors.”

As the Gdovic family turns their focus toward Sports Cars, which Brandon Gdovic has experience in Lamborghini’s, competing in the Super Trofeo series in 2015. Last year, he was selected as one of the two drivers in North America to represent Lamborghini in its Young Driver’s Development Program.

When it comes down to comparing the business model of the two sports, it’s fairly different for small teams.

“It’s a supply-and-demand type of scenario,” Gdovic said. “There are only 40 something seats at the top level of NASCAR. On the Sports Car side, there are hundreds of seats available.

“You have a lot of people that are capable of showing up to the race and they are not as worried about sponsorship. There is more direct personal funding on that side. By us moving to that side, we opened up a much larger market of people that need a team like ours to support their racing effort.

“We certainly like NASCAR and had we had the right outside amount of funding come in to run at the level – we could have run every race if we wanted to. Depending on the amount of money you want to put into each race and how much money you want to spend on motors and engineering and the wind tunnel.

“Could we have gone in there and put a third-tier team in there and run 30th? Yeah, we could have done that with our current funding, but we weren’t willing to run with the back market teams. We expected to be in the top two-tier team, and that’s where we ran.