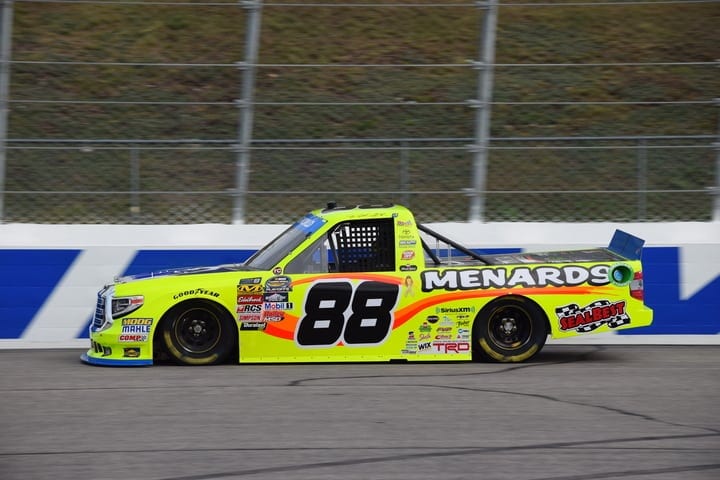 On Monday morning, ThorSport Racing announced that the team will field Ford F-150s full-time in the Camping World Truck Series in 2018.  The move comes on the heels of ThorSport leaving Toyota last week after six seasons.

The move allows Ford to maintain a proper presence in the Camping World Truck Series after the closure of Brad Keselowski Racing.  Prior to the announcement, there were only a couple of commitments from teams planning on racing Fords in the series.  One was Austin Hill Racing, which has run in concert with Young’s Motorsports over the past couple of years.

ThorSport Racing owner Duke Thorson believes switching to Ford will not change anything about the organization.

“With 23 years in the NCWTS, we look forward to our new partnership with Ford Performance in NASCAR,” Thorson stated.  “Our pursuit of wins and championships remains at the forefront of our objectives.”

Ford Performance believes that having ThorSport Racing is key to the brand continuing to meet it’s objectives in the Camping World Truck Series.

“We’re excited that ThorSport Racing has decided to switch to a F-Series truck for the 2018 NASCAR Camping World Truck Series,” said Mark Rushbrook, global director of Ford Performance Motorsports.  “ThorSport is a proven championship-level team in the series, and we look forward to providing them the aero and simulation technical support that will ensure they remain at the top level of the Truck Series.”

The team has not full unveiled their 2018 driver lineup.  However, they have already confirmed that Matt Crafton will be back in the No. 88 Menards Ford in 2018 for the 14th straight year and 17th overall.  The end of ThorSport Racing’s partnership with Toyota also brought the end of the team’s sponsorship from Safelite, which has moved over to Noah Gragson‘s No. 18 at Kyle Busch Motorsports.  The team plans to release what they say will be a full team and driver lineup in the next couple of weeks ahead of the season opener in Daytona.

Ought to be interesting hearing the words Thor Sport Ford coming out of Hermie Sadler’s mouth.