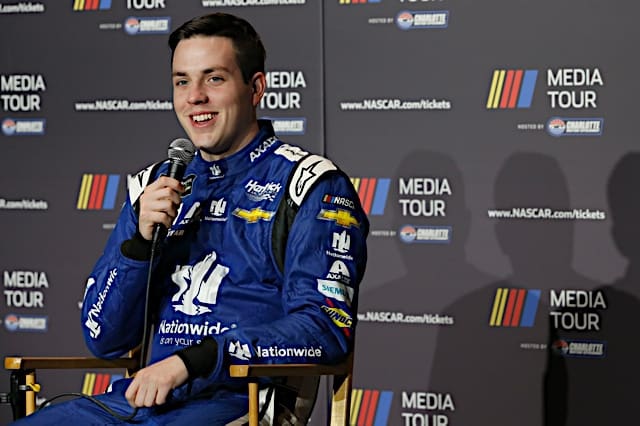 Tucson, a city located in the heart of Pima County in Arizona, is famous for its Native American roots, proximity to the U.S.-Mexico border, desert environment and the University of Arizona.

It’s now also the home of the replacement of NASCAR’s Most Popular Driver ever come February’s Daytona 500.

Alex Bowman, 24, hails from the southern Arizona town of Tucson. He’ll drive the No. 88 Chevrolet for Hendrick Motorsports, which Dale Earnhardt Jr. raced in the second half of his career.

Quite big shoes to fill for his first full season with HMS.

“The No. 88 has a huge following,” Bowman said. “I’ll do my best to keep that car up front. That’s what they hired me for. I’m a pretty down-to-earth guy, pretty relatable to most NASCAR fans.”

Bowman got his shot on NASCAR’s national scene in 2012 and unpredictably finds himself in the opportunity of a lifetime. He has the potential to be a superstar, despite his uncharacteristic rise in stock car racing.

“This kid is different,” Alex’s father, Sean Bowman, said in a 2012 interview with Tucson.com. “I’ve heard too many racing people, people with no money at stake, say that Alex is more than ready for this race.”

The race he was referring to was his son’s debut in the XFINITY Series when he was 19 years old. It occurred about a year after his graduation from Ironwood Ridge High School in Oro Valley, a suburb just a few miles north of Tucson.

In 2013, Bowman landed a full-time ride with RAB Racing as the No. 99 driver. Although RAB wasn’t quite a front-running team (Bowman had an average finish of 16.5), he made the most of it with two pole awards and six top-10 finishes.

The next year, he competed full-time with BK Racing for his rookie year in Cup, but it was the select events he ran in XFINITY that year that put him on the map.

He drove two races with JR Motorsports in late 2014, including the fall event at ISM Raceway. He was running third late in the race when he ran out of fuel and wound up 17th.

Tommy Baldwin Racing picked up Bowman for the 2015 Cup season, and he qualified for all but the Daytona 500. After that year, TBR relieved him of his driving duties. Bowman didn’t have a ride for the upcoming season.

In the first half of 2016, he ran a partial schedule in the JRM No. 88 in the XFINITY Series. He captured one pole at Michigan International Speedway in June.

A month later, Earnhardt was sidelined due to concussion symptoms, and Bowman was given the opportunity to drive the No. 88 at New Hampshire Motor Speedway. Bowman was running seventh with 30 laps to go when he suffered a flat tire and made contact with the wall. He ended up 26th.

He did have nine more chances to prove himself, though. The best race of his career came at ISM, where he won his first career Cup Series pole. He led 194 laps and finished sixth.

By the end of 2016, Bowman made the NASCAR community realize he was the real deal. He hadn’t won a race in Earnhardt’s absence, but he was fast every week.

When Earnhardt announced he’d retire at the end of the 2017 season, the question that needed to be answered was: Who will be his replacement?

Bowman’s name was in the conversation, as was William Byron, Matt Kenseth and Brad Keselowski. As the months passed, Kenseth said he wasn’t a candidate for the No. 88. Keselowski signed an extension to stay with Team Penske. Kasey Kahne was out at Hendrick for 2018, and Byron would take his place.

In late July, Bowman was confirmed as the next No. 88 driver for Hendrick. And in October at Charlotte Motor Speedway, Bowman became a NASCAR winner in the XFINITY Series.

“[That win] proved that I can come out of the box strong,” he said. “It gave me a lot of confidence this offseason.”

Now, this young man from Tucson, which has a population of a little more than 500,000 people, will have the chance to become the face of NASCAR.

Is it fate? Bowman isn’t sure. But he’s proud to represent the city he comes from in stock car racing’s pinnacle.

“Everything happens for a reason. … There are a lot of really talented racecar drivers that have come from that area,” Bowman said. “Just because they didn’t make it to NASCAR, IndyCar guys and sprint car guys you have legends from Tucson. It’s a cool place to be from, and there’s a lot of really cool racing in that area. I’m glad to represent it in NASCAR.”