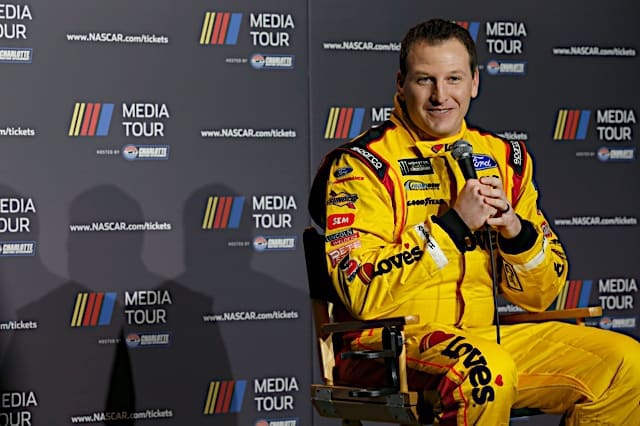 Veteran Monster Energy NASCAR Cup Series driver Michael McDowell will pilot the No. 34 Ford Fusion for Front Row Motorsports in 2018, and recently, the sponsorship picture for the team has gotten clearer.

Longtime FRM partner Love’s Travel Stops will sponsor 18 races, including the Daytona 500, both events at Texas Motor Speedway, the Bristol Night Race and the throwback weekend at Darlington Raceway.

Partnership with @team_frm…✔️
A driver for the No. 34 Love’s Ford…✔️
Fueled for 18 races this season…✔️
Love’s is ready for Daytona to kick off the 2018 Monster Energy #NASCAR Cup Series! pic.twitter.com/pLIbS5HYOP

“We look forward to kicking off another great season in Daytona with Front Row Motorsports,” Dave Frankenfield, vice president of marketing for Love’s Travel Stops, said in a press release. “[Owners] Bob Jenkins and Jerry Freeze continue to provide great value and flexibility in our partnership while working tirelessly to put a competitive car on the track each week.”

This will be the sixth season the Oklahoma City-based company has been with FRM, which included David Gilliland’s second-place finish in the Aaron’s 499 at Talladega Superspeedway in 2013, when David Ragan took the checkers on the team’s first-ever victory.

“I know first-hand what it’s like to drive a motorhome all over the country with my family on board,” McDowell said in a press release. “So, I know how important it is to have a clean and safe place to stop at any hour of the day to fuel up, grab some snacks and whatever else we need on a road trip. Love’s has all of that, both for regular consumers like me and for professional truck drivers who make a living out on the road.”

Derrick Finley will be McDowell’s crew chief this season. He was the crew chief for Ragan’s No. 38 team in 2017 and has been with the organization since 2011.

More sponsor news! @KLOVERadio will again partner with @Mc_Driver — on the No. 34 for five races in 2018. Welcome to the FRM family, K-LOVE. pic.twitter.com/TrBcGq7Qgi

McDowell’s longtime sponsor K-LOVE will be on the car for five races in 2018. Those races will be the spring events at ISM Raceway (Phoenix) and Richmond International Raceway, the July Daytona race and the road course races of Watkins Glen and the Charlotte roval.

“Sometimes sponsors come and go in racing, but I’m really proud that my relationship with K-LOVE has been a long-term one,” McDowell said in a press release. “Wherever I’m traveling, whether I’m having a good day or a bad day, K-LOVE is there – on the radio or online – with positive and encouraging music. I’m grateful for that, and I’m grateful for K-LOVE’s support throughout my career.”

The sponsorship for Ragan’s No. 38 has also begun to be released; the Shriner’s Children’s Hospital will be on board for three races, while online lighting retailer 1000Bulbs.com will sponsor four races.

Seth Barbour will be Ragan’s crew chief, after serving in that role with the No. 34 team last season with Landon Cassill driving.