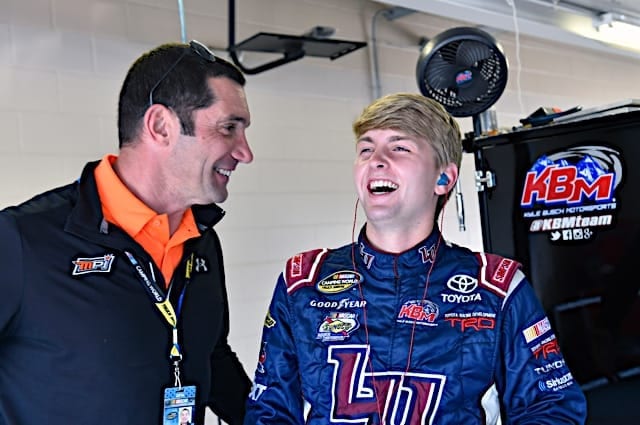 Daytona International Speedway has used its famous roval for the 24-hour sports car race since the 1960s. Now, Charlotte Motor Speedway has a roval of its own.

The design at CMS didn’t come without the help of experienced road course racers, though. Max Papis, who has competed in open-wheel, sports cars and stock cars throughout his career, assisted Speedway Motorsports Inc. officials in perfecting the new circuit, which makes its debut in October for the NASCAR playoffs.

The 2.28-mile track, built within the CMS confines, features two chicanes and a pathway that cuts through the infield. It will be the first road course run during the playoffs since NASCAR developed a postseason format in 2004.

Papis said the roval also offers versatility. It’s a course that could be utilized not just by NASCAR but also by other series.

“You could go from a Legends car to an Indy car to an IMSA car,” Papis told Frontstretch. “I’m looking forward to seeing what this roval will bring. In my personal opinion, this is going to be a tremendous success [and] not just for stock cars.”

The track is similarly shaped to Daytona’s roval. That track goes through the infield before the cars reenter the oval in the high-banked Turn 1 along with the inner loop chicane before Turn 3. But CMS’ smaller size makes the track a little tighter. That means there’s a higher chance of cars bumping as they roll through the tight turns.

“You have the heaviest braking corner right in front of the grandstand and the opportunity to take at least three different lines,” Papis said. “I’ll tell you, if it’s a green-white-checkered, I’d definitely buy tickets there. I really believe [in what] Marcus (Smith, president and SMI COO) and the team here has done. It’s going to go way beyond the roval in itself. This opens opportunity for bringing bright racing to the track and a bright business opportunity.”

The track will use replaceable rumble strips. The strips are made of steel and were designed so that they could be used for vehicles other than stock cars.

“We put a lot of emphasis on curbing. But if you heard exactly what Marcus and the team said, this curbing is removable,” Papis added. “We actually have a plan to come up with curbing that is benign for other kinds of cars.”

If the roval proves to be successful, expect Charlotte’s new innovation to attract plenty of other races. It’s turns make it reminiscent of a typical speedway, one that NASCAR has made famous since its inception. But the infield entrance leading to the twists and turns are tight and bound with walls. That look is similar to a street course, a design on which both the IndyCar Series and IMSA compete.

Depending on NASCAR’s success with the track, Papis said he hopes more venues will follow Charlotte’s example. More road racing designs might encourage other premier series to give them a try.