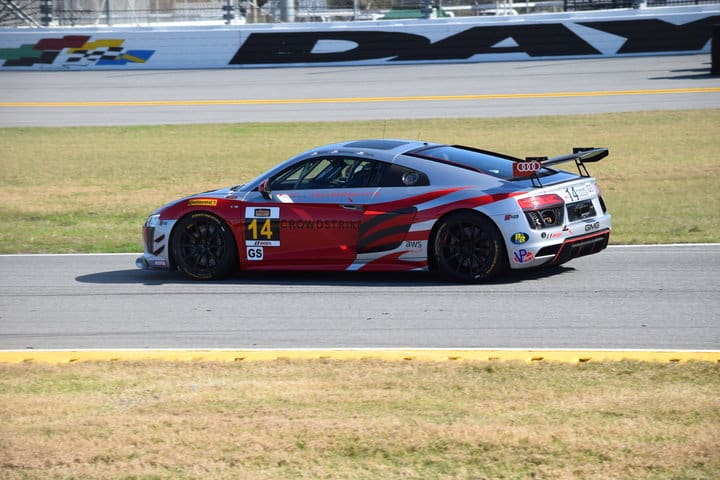 On Wednesday afternoon, the IMSA Continental Tire SportsCar Challenge team took on Daytona International Speedway’s 3.56-mile road course for the first of two scheduled practice sessions.  While others struggled at times, GMG Racing’s Andrew Davis got his new Audi R8 LMS GT4 up to speed quickly.  19 minutes into the one hour session, Davis turned in a lap of 115.867 seconds (110.610 mph).  That time held up to be the fastest overall lap of the session, but just barely.

Davis’ lap was a mere five-thousandths of a second faster than defending Grand Sport champion Dillon Machavern in Rennsport One’s No. 28 Porsche.  Stevan McAleer was third fastest, but more than half a second behind the lead duo.  VOLT Racing’s Trent Hindman was fourth quickest, while Murillo Racing’s Eric Foss was fifth.

While Wilson was able to get the No. 3 Winward Racing/HTP Motorsport in the top 10 overall, teammate Craig Lyons had a tough go.  Late in the session, Lyons went off-course exiting the Kink and crashed his Mercedes-AMG GT4.  As of this writing, the Winward Racing/HTP Motorsport crew is attempting to fix the left side of the No. 3 Mercedes.  A collection of discarded parts sits behind the team’s garage stall.

In TCR, Murillo Racing’s Justin Piscitell was quickest with a lap of 120.822 seconds (106.073 mph) in his Audi RS 3 LMS Club Sport.  That lap was four-tenths of a second faster than C360R’s Pierre Kleinubing.  Britt Casey Jr. was another 1.2 seconds further back in third.

CTSC teams have one more practice session on Wednesday.  It starts at 3:45 p.m. and is scheduled to run for 45 minutes.