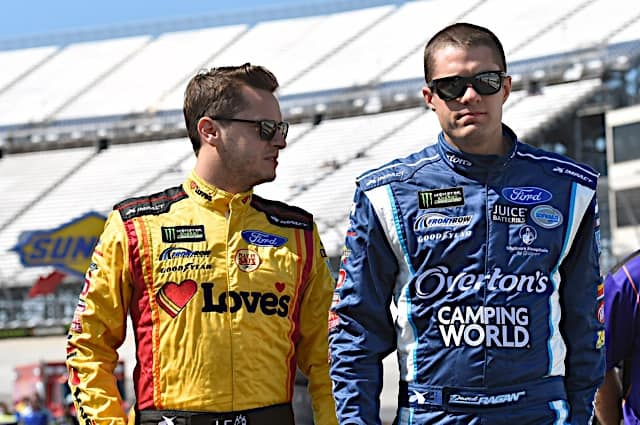 David Ragan is back with Front Row Motorsports for 2018, starting what will be his second season with the Ford organization in the Monster Energy NASCAR Cup Series.

Picking up a few returning sponsors like 1000 bulbs and Shriner’s Children’s Hospital for his No. 38 ride, the Georgian is in fairly solid shape for the season to come.

However, while the offseason has come and gone, so has Landon Cassill, who paired with Ragan at Front Row in 2017. Due to lack of sponsorship, Cassill was unable to return to the seat.

“There are more qualified drivers than seats,” Ragan said. “Matt Kenseth is a good friend of mine and is as good a driver as anyone. With Landon, he’s a good talent, smart, has a good feel for what makes a car go fast. I hate that [he’s out of a ride], but I have to look after my best interest, and I can’t dwell and worry on that.”

While Cassill is on the market for 2018, Michael McDowell will add another small organization to his resume, running his first full season for Front Row in the No. 38. Ragan believes McDowell is a good fit, having the experience of working hard for a ride.

“Michael comes from a good mold, he doesn’t take anything for granted,” he said. “He works extremely hard and is motivated to make that top spot.”

Though he’s started every Cup race the last 11 years, Ragan has still had a share of sleepless nights, tossing and turning with thoughts of the year to come in his head. After more than a decade bouncing from team owners like Jack Roush, Michael Waltrip and Joe Gibbs to small teams like BK Racing and now Front Row, it’s become normal for the 32-year-old to never keep the same suit on from year to year.

But he never takes for granted his spot on the starting grid.

“You have to stay hungry,” he said. “You can have all the talent in the world, if you’re not hungry to learn and understand new technology and work with new people, you will fall behind quick. You can rely just on your god-given talent.

“I feel every year is a make-or-break one for me. I’ve never the sense of everything being paved for me the next year, even if I have a multi-year contract.”

Though egos may run high at the top levels of racing in the world, Ragan does not conform to that.

“I’m not the king, I’m not the emperor,” he said. “Some drivers in our sport feel like they’re the king of their team. But we’re all part of the team. There are so many drivers who are talented and who deserve a ride. But there’s only 40.”