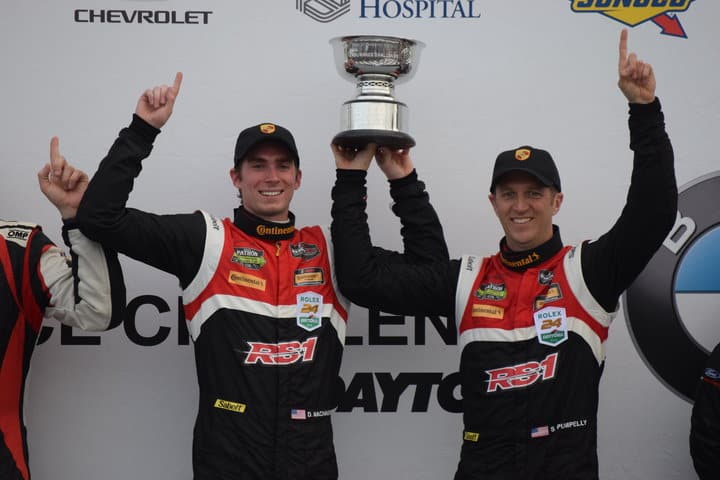 In the Continental Tire SportsCar Challenge, Rennsport One’s No. 28 Porsche for defending Grand Sport champion Dillon Machavern and Spencer Pumpelly was the class of the field all week in Daytona.  The four-hour BMW Endurance Challenge was no different as Machavern took the lead for the final time when DXDT Racing’s Aaron Povoledo had to pit with 19 minutes to go.  From there, Machavern pulled away to take the overall victory.

Much like after qualifying, Machavern and Pumpelly noted that the team was very much responsible for their form.

“The [Rennsport One] crew worked so hard over the offseason as well as last year to really develop the [Porsche] Cayman GT4 platform,” Machavern said after the race.  “We…had a leg up.  We unloaded really well while all the other teams were really just getting used to their cars that don’t have many miles on them.  That was a huge advantage for the RS1 team.”

From the pole, Pumpelly opened up a small gap on the field as Bodymotion Racing’s Stevan McAleer charged up from fifth to second.  Further back, Multimatic Motorsports’ Ty Majeski, who had never competed in a race on a road course prior to Friday, was very quick early on.  Despite not having as much top-end speed as he would have liked, Majeski moved up from eighth starting spot to get himself into the top five.

As the race continued on, the second run of the race saw Machavern and McAleer battle hard for the lead.  Meanwhile, Majeski moved himself up to third with good form and patience.

The biggest accident of the day was a chain reaction in turn 1 near the halfway.  Multimatic Motorsports’ No. 22 of Chase Briscoe was rear-ended, while GMG Racing’s George Kurtz, Winward Racing/HTP Motorsport’s Russell Ward and Automatic Racing’s Russell Phillips were also involved.  Ward’s Mercedes-AMG GT4 ended up looking like this afterwards:

From earlier in the day: @ruward92 had to deal with this situation after rear-ending another car. You're not getting anywhere quickly like that. They're behind the wall for the day and will finish 39th. pic.twitter.com/OgPOtl9Cqy

Ward ultimately pulled off at the International Horseshoe and was done for the day.  Kurtz took a solid hit to the right front, ending his day.  Phillips was also done after taking a big hit to the right rear.  He was ultimately transported to Florida Hospital Memorial Medical Center.  He is expected to be released later on Friday night after having a CT scan of his head.

The second half of the race saw pit strategy come into play.  Stops under green by the leaders shortly after the aforementioned crash resulted in a number of drivers taking turns at the front of the field.  When the dust settled, Povoledo was at the front attempting to make it to the end.  That didn’t happen.

Machavern’s margin of victory was 7.1 seconds over BimmerWorld Racing’s No. 82 BMW M4 GT4 of team owner James Clay and Tyler Cooke.  Cooke credited the M4 GT4’s relative gentleness for his form late in the race.

“[Tire wear is] the advantage of the BMWs; it didn’t use its tires,” Cooke told Frontstretch after the race.  “You could see the cars starting to fall off.  That’s where we started to push a little bit more.  BMW brought a great car straight from the box.  James [Clay] had a helluva stint to put the car up there.  I’m happy that I got to take it home in second.”

Multimatic Motorsports’ No. 15 for Majeski, Cole Custer and Scott Maxwell finished third, an excellent result knowing that two of the drivers have limited experience on road courses.  Classic BMW’s No. 72 BMW for Toby Grahovec, Jason Hart and Mike Vess moved up from 15th on the final restart to finish fourth.  Winward Racing’s No. 57 Mercedes for Indy Dontje and Bryce Ward rounded out the top five.

On the other hand, the two cars that led the field on the final (Povoledo and Greg Liefooghe) ended up finishing 13th and 15th, respectively.  Alan Brynjolfsson and Trent Hindman were second with 15 minutes to go before the tires went away on their Mustang.  In the final few laps, Hindman dropped all the way to eighth.

There were five full course cautions during the four-hour race.  As a result, much of the field was bunched up together.  15 cars finished on the lead lap.  With an hour to go, 20 cars were on the lead lap, including the top three TCR entries.

In TCR, the time sheets from most of the practice and from the Roar indicated that the race could be a Compass Racing benefit.  For much of the event, it was.

Kuno Wittmer led from the pole and was not challenged until the first yellow flew 33 minutes into the race.  Following a round of pit stops, Britt Casey Jr. assumed the class lead in the No. 77 Audi with Rodrigo Sales in close pursuit.  Sales and Wittmer tried, but they could never quite get in front of the duo of Casey and Tom Long.

For Casey, Friday was his first career CTSC victory after coming so close last July at Lime Rock Park.  He was overjoyed.

“We’ve been banging on the door [of victory] for years now,” Casey said during the post-race press conference.  “After the race, I gave my dad the biggest hug.  It’s the amount of sacrifice that we’ve put in.  It’s a lot of hard work and it’s finally paid off.”

Street Tuner saw BimmerWorld Racing’s duo of Nick Galante and Devin Jones dominated the proceedings.  The main threat to the lone BMW 328i were the trio of MINIs.  However, each of the MINIs was struck down by a number of issues.  All three MINIs spent significant time in the pits.  The best of the MINIs (No. 37) ultimately finished a full nine laps out of the class lead in fourth.

Jones ultimately drove for the first 2.5 hours.  By the time Galante got into the car, their competition was miles behind.  Galante admitted after the race that he really didn’t have to do all much in order to bring home the class win.

The win was the first CTSC victory in Jones’ career.  For Galante, it is the first win for him as a closing driver.  Afterwards, Jones was overjoyed with his day.

“Definitely a great start to the year.  Couldn’t get much better,” Jones told Frontstretch outside of Victory Lane.  “A pole and a win at Daytona is huge.  Just a massive day for us and the whole BimmerWorld team.”

Galante and Jones won by a lap over Bodymotion Racing’s Jason Rabe and Max Faulkner.  Murillo Racing’s Brent Mosing, Piscitell and Tim Probert finished third, two laps down in what will be the final race for their Cayman.

The IMSA Continental Tire SportsCar Challenge returns to action at Sebring International Raceway for the Visit Sebring 120 on Mar. 16.  The race is scheduled to go green at 2:45 p.m. and will be live-streamed at both IMSA.com and FansChoice.tv