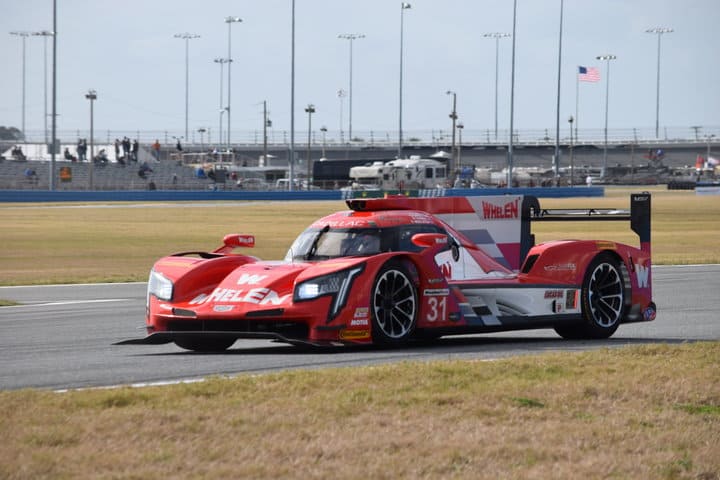 In the first quarter of the Rolex 24 at Daytona, the Cadillac DPi-V.R.s have dominated.  Renger van der Zande started on pole and led early.  However, the fastest car for the vast majority of the first six hours has been the No. 5 Mustang Sampling-sponsored Cadillac from Action Express Racing.

Nearly the first 2.5 hours of the race was run under green.  In that time, the team of Filipe Albuquerque, Joao Barbosa and Christian Fittipaldi ran off to a 20-second lead as some of their potential rivals faltered.  Both of the Mazdas have had significant issues.  Tequila Patron ESM’s No. 22 blew a right rear tire.  Acura Team Penske’s No. 7 had a door latch issue that cost them a lap.

What really threw the order for a loop was rain.  All week, the weather talk has centered around the chance of rain in the final couple of hours of the race.  However, it was raining slightly as early as the pre-race Fan Walk Saturday afternoon.  Early in the sixth hour, the skies opened and soaked the 3.56-mile road course.  Teams were forced to scurry in order to keep their drivers satisfied.  Most of the field dove into the pits for wet tires, while a couple of hardy racers pressed their luck on slick tires.

Once the running order stabilized following the shower, it was Action Express Racing’s Mike Conway in the overall lead in the No. 31 Whelen Cadillac DPi-V.R.  Conway’s lead was 7.7 seconds over Acura Team Penske’s Helio Castroneves, who made up the lap lost from the door issue.  Albuquerque was third in the No. 5 Cadillac, followed by Wayne Taylor Racing’s Jordan Taylor.  Dane Cameron in the No. 6 Acura was fifth.  Eight drivers were on the lead lap at the time.

In GT Le Mans, Ford Chip Ganassi Racing IMSA’s No. 66 Ford GT has dominated the race.  Joey Hand led from the pole and was never seriously threatened during his time in the car.  The veteran racer never got that far away from the pack, but was unassailable outside of pit windows.  The No. 67 has had a much harder race.  Richard Westbrook lost a significant amount of time in the pits due to a braking issue early on, but eventually made it up.

The maiden race for the BMW M8 GTE has been a trying experience.  The team has lacked speed all weekend (something they knew would happen going in), and had reliability problems.  Bill Auberlen was racing in turn 2 of the tri-oval when he had a massive right front tire blowout.  The car went up the hill and nearly hit the SAFER Barrier.  Auberlen was able to nurse the car to the garage for repairs to the right front corner.

At the six-hour mark, the No. 66 Ford of Hand, Sébastien Bourdais and Dirk Müller led the class by 8.349 seconds over the No. 67 Ford.  Risi Competizione’s No. 62 Ferrari was third, followed by the No. 911 Porsche and the No. 4 Corvette.

In GT Daytona, the lead had been shared by a number of teams earlier on.  One of those teams was the Montaplast by Land-Motorsport Audi of the van der Linde brothers (Kelvin and Sheldon), Christopher Mies and Jeffrey Schmidt.  Another was the Riley Motorsports No. 33 Mercedes.  Both of the Michael Shank Racing with Curb-Agajanian Acuras have been right there as well, despite being down on top speed.  Katherine Legge stated during a press conference that they were hoping for rain.

Montaplast by Land-Motorsport was on a lap of their own in the lead at the six hour mark.  Riley Motorsports’ No. 33 Mercedes was second, but with the Shank No. 93 Acura right on it’s heels.  GRT Grasser Racing Team’s No. 11 Lamborghini was fourth in class after getting sent to the rear of the field for the start.  The No. 86 Shank Acura rounded out the top five.

Despite the rain shower, the race has been quite clean so far.  There has been only one full course caution to this point.  That came in the third hour when James French slowed on-track in his Performance Tech Motorsports ORECA 07-Gibson and eliminated a 20-second lead for Barbosa.