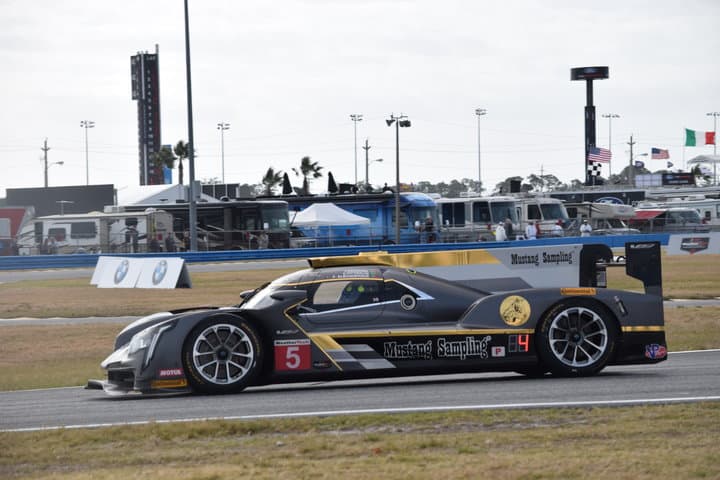 On Sunday afternoon, Action Express Racing’s No. 5 Cadillac shared by Filipe Albuquerque, Joao Barbosa and Christian Fittipaldi overcame significant overheating issues to win the Rolex 24 at Daytona.  For 2018, the Cadillac DPi teams have new 5.5-liter engines, replacing last year’s 6.2-liter units.   Reliability was a question, and in the end, it almost completely swung the race.

For Albuquerque, the overheating issues nearly ruined what had been a very enjoyable race.

“From the start of the race through mid-race was a lot of fun,” Albuquerque said during the post-race press conference.  “I had fun battling with [Acura Team Penske].  It was a sprint.  I had some fights with Helio [Castroneves] where I was almost laughing on the radio.

“I think everyone got overexcited and went too hard because the machinery started breaking down,” Albuquerque continued.  “The Cadillac wasn’t strong at the end.  It was fun for no one, myself included over the last six hours.  My steering wheel was like a Christmas tree with water temperature flashing up and oil temperature flashing up.  I had to stay away from the slipstream of everyone, but still push while thinking, ‘Is it going to last?'”

As Albuquerque noted, the overheating issues developed in the 18th hour.  During the fourth and final full course caution, Fittipaldi took the No. 5 Mustang Sampling Cadillac to the garage with a one-lap lead on the field.  The reasoning for the move was that the car had been losing water and needed a refill.  Fittipaldi kept the lead after the brief garage visit, but lost his one-lap advantage.  Teammate Mike Conway was able to get back on the lead lap and looked to be able to take the fight to his teammate.

However, Conway’s No. 31 was also struck by overheating issues and had to go behind the wall as well.  Since Conway had to do it under green, he lost three laps to Fittipaldi.

From then on, the No. 5 team was never seriously challenged.  For the last couple of hours, Albuquerque had to drive the No. 5 at a pace roughly six seconds a lap slower than he was capable of in order to save the engine.  According to Albuquerque, this scenario was not enjoyable as the readout on his steering wheel was lighting up like a Christmas tree.

As a result, Conway was able to make up two of his three laps on Albuquerque.  After switching to Sunoco Whelen Challenge winner Stuart Middleton for the final stint, the No. 31 team was able to unlap themselves in the final hour.

Other favorites were felled by a series of tire failures.  Continental Tire released a statement mid-race that seemed to place blame on teams pushing the envelope.

(1 of 2) Teams are pushing the envelope with low pressure & aggressive camber. When this happens, and teams are not within the parameters we set forth, problems can occur. Especially double stinting a set of tires.

(2 of 2) These are the same dry tires we’ve used for 5 years without issue. The teams within the parameters are double stinting tires with no issue.

The most prominent of this group was Wayne Taylor Racing.  They suffered no less than five flat right rear tires during the race.  After the last failure, the team voluntarily pulled out of the race, claiming that it was not worth it to risk their drivers.

Tequila Patron ESM was very fast early on.  However, neither car managed to finish.  The No. 2 retired due to gearbox failure, while the No. 22 (after at least one blown right rear tire) had their engine catch fire on pit road.

Finally, you have the story of Fernando Alonso, who was making his endurance racing debut at Daytona.  Early in the weekend, he was very worried about his Ligier’s pace.  Those worries turned out to be unfounded.  Alonso led laps during pit sequences and had the No. 23 up in the top five as late as the seventh hour before problems started.  First, there was a blown tire.  Then, the brakes failed, sending Alonso straight at the end of the frontstretch.  Ultimately, Alonso, along with teammates Phil Hanson and Lando Norris finished 38th, 90 laps down.

GT Le Mans is normally a very close class between all the different manufacturers.  That really was not so in Daytona.  The race was dominated from start to finish by Ford Chip Ganassi Racing.  Corvette Racing’s Jan Magnussen started from the pole, but Joey Hand was able to take the lead away on the first lap.  The Fords held onto the advantage for the first five hours of the race.

Pit strategy allowed the No. 4 Corvette and the No. 911 Porsche to lead the class in the sixth hour.  A crash for Nick Tandy dropped the No. 911 out of contention.  From that point to the finish, it was the Fords up front.  For much of the race, the two Fords had a lap on third-place.  The final full course yellow allowed Mike Rockenfeller in the No. 3 Corvette to get back onto the lead lap.  However, Corvette Racing could do nothing with the Ganassi juggernaut on this day.

For the vast majority of the race, the No. 66 of Sébastien Bourdais, Joey Hand and Dirk Müller led with the No. 67 never more than a few seconds behind.  Ganassi stated during an on-air interview that he wanted nothing to do with the two team cars hitting each other.  Therefore, it makes sense that the eventual pass for the win occurred in the pits.

In the 22nd hour, the No. 67 team stopped and did a “short fill,” meaning that they did not fill their tank up of fuel.  That allowed them to make a quicker stop.  When the No. 66 made their final stop a couple of laps later, the No. 67 was able to jump the No. 66 and take the lead.  From there, the trio of Ryan Briscoe, Scott Dixon and Richard Westbrook pulled away to take the class victory.

The margin of victory was 11.180 seconds over the No. 66 Ford.  The No. 3 Corvette of Magnussen, Rockenfeller and Antonio Garcia was two laps back in third.  The No. 4 Corvette of Marcel Fässler, Oliver Gavin and Tommy Milner was fourth, while Risi Competizione’s Ferrari was fifth.

In GT Daytona, the entire first third of the race was dominated by Montaplast by Land-Motorsport’s No. 29 Audi.  However, a highly controversial penalty was assessed just after Midnight.  The team was given a stop and five-minute hold in the pits for violating Attachment 2 of the IMSA Sporting Regulations, which pertains to Balance of Performance (BoP).  The problem appeared to be with the team’s fuel filler.  They could fill up their Audi quicker than the 40 seconds that IMSA wanted.

This was the first time that IMSA chose to use their “anti-sandbagging rule” during a race.  Previously, the Lamborghini teams were all given stop plus five minute penalties in post-race for BoP violations during the 2016 Rolex 24 at Daytona.

The penalty dropped the No. 29 from a one-lap advantage over the rest of the class to two laps down in 11th.  The Land team would eventually finish seventh in class.

Ultimately, the penalty threw the class upside-down.  All of a sudden, six different teams were in contention.  Four of them came to prominence.  Those were GRT Grasser Racing Team’s No. 11 Lamborghini, Riley Motorsports’ No. 33 Mercedes, Paul Miller Racing’s No. 48 Lamborghini and Michael Shank Racing with Curb-Agajanian’s No. 86 Acura.

GRT Grasser Racing Team ultimately rose above everyone else.  In the 20th hour, Franck Perera was able to get past Riley Motorsports’ Adam Christodoulou to take the class lead.  From there, the team had only slight pressure for the rest of the field.

The green-flag feel of the race ultimately forced Jeroen Bleekemolen to make an extra pit stop in the closing minutes when he had GRT’s Mirko Bortolotti in his sights.  That allowed the team of Bortolotti, Perera, Rik Bruekers and Rolf Ineichen to take the GT Daytona class victory.

With the late pit stop for the Riley Mercedes, the margin of victory was considered to be a full lap over the No. 86 Acura of AJ Allmendinger, Trent Hindman, Katherine Legge and Àlvaro Parente.  In reality, the margin was around 16 seconds, but the overall winner ended up between Bortolotti and Parente.  Third went to Paul Miller Racing’s Lamborghini for Andrea Caldarelli, Bryce Miller, Bryan Sellers and Madison Snow.  Riley Motorsports’ No. 33 for Bleekemolen, Christodoulou, Ben Keating and Luca Stolz had to settle for fourth.  Scuderia Corsa’s No. 64 Ferrari for Townsend Bell, Sam Bird, Frankie Montecalvo and Bill Sweedler was fifth.

Given the very low amount of cautions (four yellows for 24 laps, the least number of full course cautions since 1994’s one), the race set a couple of all-time records.  Both of the Action Express Racing Cadillacs completed a record 808 laps, 46 more than the previous record of 762 from 1992.  Those 808 laps covered 2876.48 miles, more than 100 miles longer than the 1982 24 Hour Pepsi Challenge.  Also, attrition was quite low.  Officially, only seven cars officially retired from the race.  Six of them were DPi chassis in the Prototype class (both Mazdas, both Nissans and two of the four Cadillacs), along with Manthey Racing’s Porsche.

The IMSA WeatherTech SportsCar Championship returns to action St. Patrick’s Day weekend for race No. 2 of both the WeatherTech Championship and the Tequila Patron North American Endurance Cup.  The Mobil 1 12 Hours of Sebring is due to start at 10 a.m. on Saturday, Mar. 17.