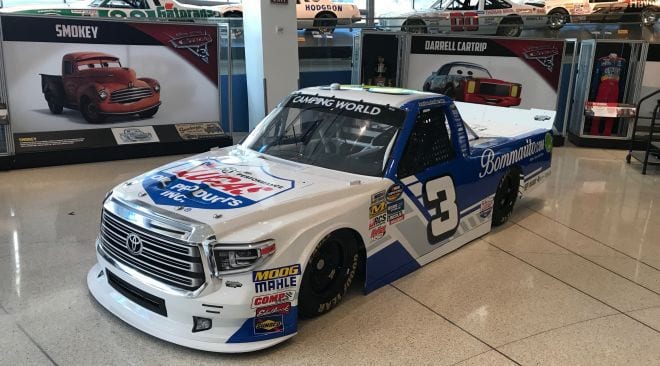 Jordan Anderson has been a NASCAR driver for a few years, and now he’s also a team owner.

Jordan Anderson Racing, officially formed for the 2018 season, will run full-time in the Camping World Truck Series with its owner behind the wheel. Anderson will pilot trucks featuring the No. 3 in 2018.

Anderson, who has spent the last three years running the majority of the NASCAR Camping World Truck Series, brings his sponsorship partners from 2017, Lucas Oil, Bommarito Automotive Group and LTI Printing, to his new team.

The team will race a Toyota at Daytona and Talladega, the two restrictor plate tracks. The remaining events will be run in a Chevrolet, while the team will have a Ford acquired from the closing of Brad Keselowski Racing as a spare.

“This is probably going to be one of the most exciting seasons of my racing career. 2018 is shaping up to be one of the best yet.” Anderson said. “We’ve got such a small group of guys. We want to build. We want to grow. The opportunity presented itself and everyone stepped up. “It’s going to be a new chapter for all of us to play the role of owner/ driver this year. It’s going to be an exciting one. It’s definitely fueling the entrepreneurial spirit.”

“To take the next step in my racing career this way is very humbling, and extremely meaningful. Our entire team is made up of guys that love racing, and we’re all eager to see what adventures the years ahead hold for us.”

The primary change for Anderson is that he now has four trucks available to race, including a purpose-built superspeedway truck. It’s a far cry from last year when Anderson had a single truck and had to repair it on multiple occasions simply to make it to the next event. The No. 3 team will also use the Ilmor spec motors NASCAR introduced to the series this season.

Anderson gained a substantial following in 2016 with his Fueled by Fans campaign. After a motor failure, Anderson posted on social media that he may not be able to afford to go to the next race. A handful of fans encouraged him to start a crowdfunding campaign. The effort went viral and the fund generated enough money to get the team to the next race at New Hampshire Motor Speedway. Grateful, Anderson hand wrote the name of every fan who donated to the fund on the bed of the truck. Anderson said the fund will remain active and fans can continue to donate to the team.

The Truck Series will open its season Friday, Feb. 16 at Daytona International Speedway with the NextEra Energy Resources 250.