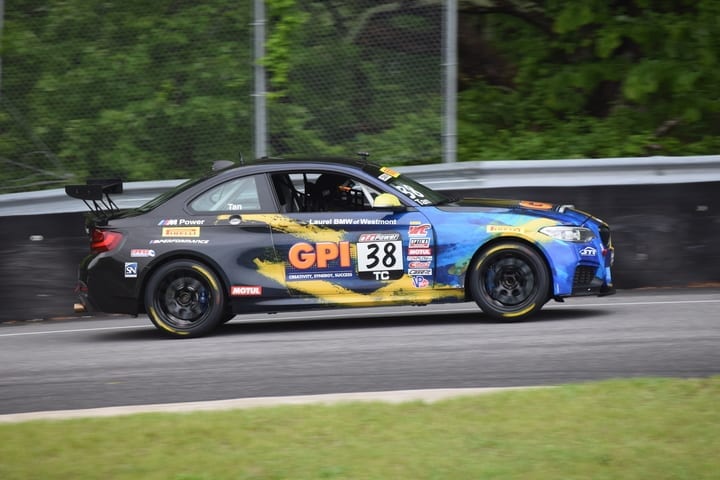 On Thursday, ST Racing announced that they will move up from Pirelli World Challenge’s TC class to the new GTS Sprint-X class for 2018 with two new BMW M4 GT4s.  Samantha Tan and Nick Wittmer will drive one of the cars while Connor Bloum and Aurora Straus, teammates from last season with Rennsport One in the IMSA Continental Tire SportsCar Challenge’s Street Tuner class, will drive the other car.

Wittmer is happy to be back with ST Racing in 2018.

“A great big welcome to our new teammates Aurora and Connor. I’m super happy to run this year again with ST Racing in a BMW M4 GT4 in the SprintX races, where Sam and I will be running in the Pro-Am class,” Wittmer stated.  “I think our new lineup will make sure the M4 runs on top.”

Wittmer moves up to GTS after finishing third in 2017 TC class points with one victory (Circuit of the Americas Race No. 2) and five top five finishes.  The point finish came despite two major setbacks.  First, he rolled his car late in the second race at VIR while running towards the front.  He was credited with a 46th-place finish.  In October, Wittmer was DQ’d from the first race at Mazda Raceway Laguna Seca for a technical inspection, losing a third-place finish in the process.

“The upcoming season is already looking amazing,” Tan stated.  “We have new cars, new teammates, and we are entering a new class. The BMW M4 GT4s are much faster than the M235s we were running last year and they look incredible. I’d like to thank Laurel BMW for their support and for helping us secure these cars. Stepping up in GTS SprintX, where the races last one hour with a driver change will be different from the TC races as it will require much more planning and strategies before and during the race. We will have to learn how to adapt on the spot!”

Tan struggled at times in 2017, her first full year in the class after moving up from TCB.  Tan finished 29th in TC points with a pair of 14ths (both races at Circuit of the Americas) being her best runs of the year.

Straus is looking forward to her newest adventure.

“I couldn’t be more excited to be joining ST Racing for the 2018 season, especially in their debut of SprintX with the BMW M4 GT4s,” Straus stated.  “Last year, Connor and I proved to be extremely competitive in the ST class in IMSA, and moving to the horsepower and perfect handling of the M4 is the right next step. This deal couldn’t have happened without the expert guidance of Nick Longhi and Ken Tan, and I’ll be forever grateful to the two of them for giving me this opportunity. I have no doubt that with the combination of this experienced team, Connor’s record-setting pace, and momentum from 2017, we’ll be making a name for ourselves in the Pirelli World Challenge Series in no time. At this point, I’m just itching to get behind the wheel of that BMW and see what it can do!”

The official announcement appears to have been delayed a few days.  Last Friday, Straus told Frontstretch that her 2018 plans post-Daytona would be announced “tonight or tomorrow.”  Also of note, Straus is still in high school in New York.  She plans to attend classes three days a week, then go off and race.

Last week, Straus started her first race in GT4 equipment at Daytona.  Starting 16th, Straus moved her Aston Martin Vantage GT4 for Automatic Racing up into the top 10 before handing over to Steven Phillips.  Later on, Phillips crashed out of the race in a chain reaction incident.

Bloum has already had some time with the BMW M4 GT4 and believes that ST Racing has a good piece.

“I was able to test the BMW M4 GT4 in December and was absolutely blown away by the performance and handling of the car,” Bloum said.  “BMW has been building racecars down to a science. I think the M4 GT4 will be extremely competitive against other manufacturers. Being a part of the ST Racing team is going to be the experience of a lifetime, and driving alongside Aurora for another season is just icing on the cake. Both Samantha and Aurora are extremely talented young drivers with incredible potential and I cannot thank them enough for the opportunity. Let’s go win some trophies.”

Bloum and Straus finished 11th in 2017 Street Tuner points with two top five finishes.  Their best run was fourth in the season opener at Daytona.

The Pirelli World Challenge season is scheduled to begin in St. Petersburg, Fla. in early March.  However, the first GTS Sprint-X weekend is at Circuit of the Americas from Mar. 23-25.