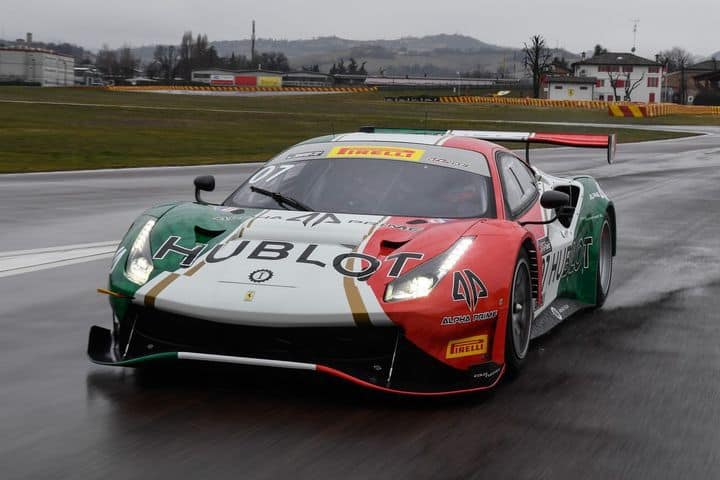 On Friday afternoon, Squadra Corse Garage Italia Americas announced that they will compete full-time in Pirelli World Challenge in 2018.  Friday saw the unveiling of their new No. 07 Ferrari 488 GT3.  For the Sprint races, the car will be driven by Martin Fuentes, 2016 GTA class champion.  For the Sprint-X races, Fuentes will be joined by Caesar Bacarella.  Primary sponsorship will be provided by Hublot, a high-end brand of watches.

“Getting on the track with Garage Italia’s team in the Pirelli World Challenge championship makes me extremely proud,” Elkann said in a press release.  “Ronnie Vogel is – first of all – a good friend of mine and I am glad to start this adventure in the motorsport industry together with Squadra Corse Garage Italia Americas. I do love challenges: my passion for competitions and speed has always been a part of my life and I am excited to the idea that a Ferrari with a livery branded by Garage Italia Style Center’s designers will run in such a prestigious championship! I am sure that drivers Martin Fuentes and Caesar Bacarella will hold the colors of Italy, Mexico and U.S.A. up high all over the world.”

Fuentes comes to Squadra Corse Garage Italia Americas after a truncated 2017 season with Scuderia Corsa.  Fuentes was teamed with former Formula One and INDYCAR driver Stefan Johansson in the No. 7 Ferrari 458 GT3.  The team ran both races at VIR, but was eliminated in a big crash.  The team entered the weekend at Canadian Tire Motorsports Park, but ultimately withdrew.

Bacarella has never started a race in Pirelli World Challenge.  His previous road racing experience comes from Ferrari Challenge, where he has one career podium finish in the Trofeo Pirelli Am class.  Last year, Bacarella made his stock car racing debut, competing in the two ARCA Racing Series presented by Menards restrictor plate races.  He failed to finish both due to damage.  His best finish was ultimately a 25th at Talladega.  Later in the season, Bacarella drove in the final two XFINITY Series races of the season in BJ McLeod Motorsports’ No. 8.  Bacarella’s best finish was a 30th at Phoenix.

Squadra Corse Garage Italia Americas will make their Pirelli World Challenge debut with Fuentes at St. Petersburg in early March.  Bacarella will debut in the No. 07 during the first Sprint-X race of the year at Circuit of the Americas.