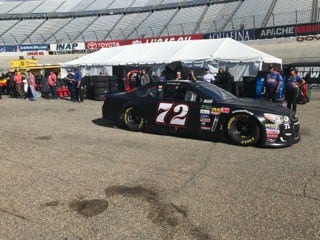 TriStar Motorsports  will return to the Monster Energy NASCAR Cup Series in 2018 on a full-time basis, the team announced Tuesday, Feb. 6.

Corey LaJoie and Cole Whitt will share the No.  72 Chevrolet as Whitt has requested a lighter load for the season.  In addition, TriStar Motorsports has obtained a charter from Front Row Motorsports and will be locked into all 36 races.

“It’s such a great opportunity to work with TriStar Motorsports,” LaJoie said in a press statement.  “I hope to use the learning experiences from my 2017 rookie season and work hard for some great finishes this year.  It’s my goal to continue building a successful team with Bryan [Smith] while honoring the legacy his dad, Mark, left behind.”

In 2017, LaJoie ran 32 of the 36 Monster Energy NASCAR Cup Series races for BK Racing, splitting time between the locked-in No. 23 and open No. 83.  LaJoie’s best finish was an 11th in the Coke Zero 400 at Daytona International Speedway in July driving the No. 23.

For Whitt, 2018 will consist of a part-time schedule as he attends to work away from the track.

“I want to thank TriStar and the Smith family for allowing me to do something I feel is the right decision for me and my family,” Whitt said.  “I am excited and a little nervous to say that I will be racing a limited schedule this year.  I am looking forward to taking the next step in my life and trying to spend most of my time with my family. Stepping back from racing is a hard choice, but I strongly believe this is the right path. TriStar has been an amazing blessing to me and my family, and I look forward to what the future holds for both of us.”

Last season, Whitt ran all 36 races in the TriStar Motorsports No. 72.  He did not finish in the top 10 all year but had four top-20 finishes.  Whitt’s best run of 2017 was a 12th at Indianapolis Motor Speedway.

The team did not announce any sponsorship in its press release, though in a separate release, LaJoie announced that Schluter-Systems would be joining the team.

In 2017, Schluter-Systems served as the primary sponsor for BK Racing’s No. 23 Toyota in two races, its best finish a 33rd with LaJoie at Martinsville Speedway.

The press release from LaJoie did not indicate how many races that Schluter-Systems will serve as primary sponsor of the No. 72.  As of this writing, LaJoie has a picture of what the No. 72 will look like with Schluter-Systems sponsorship as the cover photo for his Twitter page.