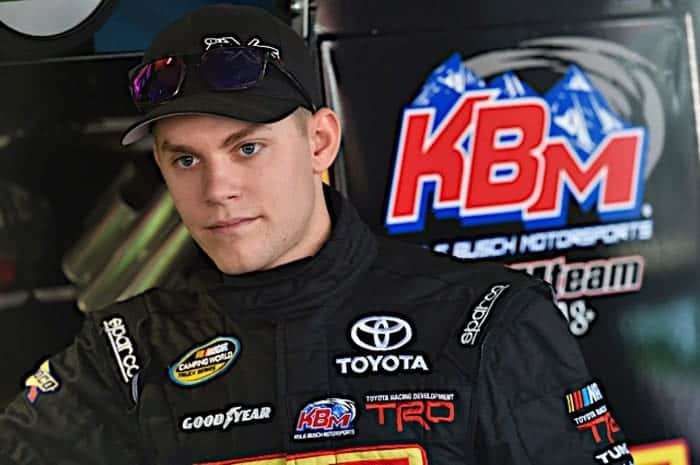 Myatt Snider is set to run for 2018 Camping World Truck Series Rookie of the Year honors. ThorSport Racing announced the addition of the 23-year-old to its lineup on Wednesday, Feb. 7.

Piloting the No. 13 Liberty Tax Ford, Snider joins two-time champion Matt Crafton, Ben Rhodes and Grant Enfinger to round out the organization’s lineup ahead of the season-opening race at Daytona International Speedway.

“To be a part of a team with a winning pedigree like Duke and Rhonda [Thorson] have built over the years is an absolute blessing,” Snider said in a team release. “After getting to know the organization over the past month, I’m even more excited to get to Daytona and to join ThorSport in 2018. I’m really looking forward to working with my new teammates, as there is a lot of knowledge to tap into going into my rookie season.

“Switching to a new manufacturer, it seems things have come full circle, with Ford being a part of some of the biggest highlights in my racing career, including my ARCA win at Toledo.”

“He is an exceptional young man and talented driver,” Pepper said. “With him, I feel we’ve really rounded out our four-truck lineup and this, to me, is the strongest driver lineup we’ve ever had. We’re going to be very competitive this season, starting with Daytona.”

Snider made his Truck Series debut in 2016 with a lone race for AM Racing at ISM Raceway. Last season, he shared a ride at Kyle Busch Motorsports and made eight starts. He posted his best finish of third at Talladega Superspeedway in October.

What the hell was that obnoxious reporter father thinking of the spelling of his kid..MYATT? Come one. WTF? For that stupid name alone and his father being a big horses butt. Thumbs down!