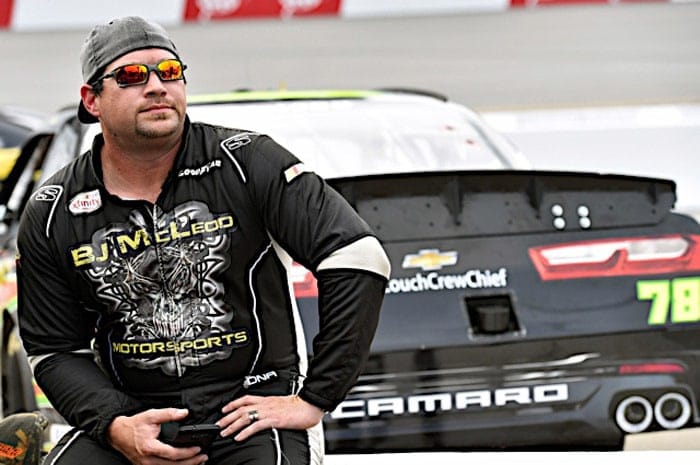 In 2016, BJ McLeod started B.J. McLeod Motorsports, hoping it would turn into something special. Two years later, and the driver-owner is excited to be heading to Daytona International Speedway with new racecars in the NASCAR XFINITY Series.

In a SiriusXM NASCAR radio interview on Saturday, Jan. 20, McLeod confirmed that Ryan Ellis, Caesar Bacarella and Ray Black Jr. will drive for the third-year team at the World Center of Racing. After Daytona, the driver lineup gets a little bleak and will depend on who brings sponsorship to the table.

“We’re going to run a third for select races and those races are up in the air right now,” McLeod told Frontstretch. “We know we’re doing Daytona and probably doing Atlanta [Motor Speedway] and Las Vegas [Motor Speedway], and we’ll go from there. It honestly depends on what I feel like doing.

“I know for sure we will run two full-time teams, and I can guarantee you there will be a third at all the speedways and road courses because that’s our best chances to get a good finish. It could turn into a full-time deal with the third car, but it’s not something that I’m actively working on.”

Last season, 13 drivers contributed to BMM, with Jeff Green and David Starr getting top-10 results at Talladega Superspeedway and Daytona. McLeod ran 25 events, with a best finish of 11th at the July Daytona race.

The team does know that Tommy Joe Martins will be in one of the team’s cars for 10-15 races. Last season at Iowa Speedway, Martins finished 11th in his third race with the organization.

“I don’t know which number or what racetracks,” McLeod said of Martins. “Other than that, it will be me whenever we don’t have a funded driver. … Right now, I have several people I’m talking to. There’s some people that have been talking about certain races, but we just have to wait and see what unfolds to know exactly what’s going to happen.”

At the three races held between Daytona and Talladega, BMM will serve under the Toyota banner. For the other 30 events, the organization will field Chevrolets.

As for how many races McLeod will pilot one of his own vehicles, it all comes down to what sponsorship other drivers are bringing to the table.

“I don’t like being out of the car, but I don’t mind it either,” he said. “What I don’t like is running 30th because I don’t have the right sponsorship. That’s why whenever someone comes to me and they have a marketing partner that works well for the team, I have no problem getting out of the car and don’t mind it at all, because I see it as it’s going to make the team has a whole run better in the future.

“If there is someone that can make the team better, that’s what I want, because on my own, we’re stuck at running top 20 if we have a really good week, and if we have a bad week we are 28th-30th. That’s where I’m at right now, until we secure more marketing partners and [get] a little more funds.”

McLeod’s goal for 2018 is to take the next step with his organization, hoping to crack the top 20 on a more consistent basis. But at the end of the day, it’s all about marketing.

“The biggest thing right now is we have to work on the sponsor and marketing part of the team to bring in more funds to work with,” he said. “My people do a great job. I have really nice cars and if I had more money, I could buy nicer cars. I honestly have bought the nicest cars I could have. We need to work with a full-time marketing partner in order to help the team, and the team has to get better at attracting those partners and working with them and building from year-to-year.”

McLeod competed in eight races for Rick Ware Racing in the Monster Energy NASCAR Cup Series in 2017. He could not confirm whether or not he will pilot a second car for the team at all in 2018 or not, though the two sides have been in talks.