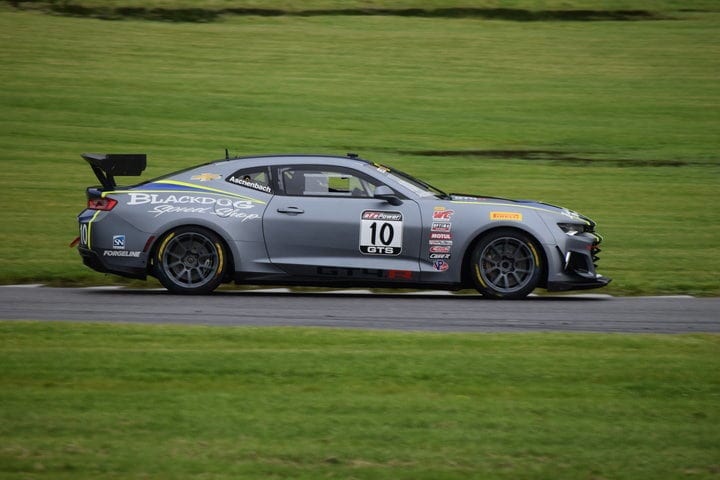 On Thursday, Blackdog Speed Shop announced that in addition to their two full-time Pirelli World Challenge GTS sprint race entries, they’ll field their two Chevrolet Camaro GT4.Rs in the GTS SprintX races as well.  In order to do that, the team has tapped Andy Pilgrim and Michael Cooper to drive.

Pilgrim, the 2005 SPEED World Challenge GT champion with Cadillac Racing, will share the No. 1 Camaro with defending GTS champion Lawson Aschenbach.  The two drivers actually competed as teammates with Cadillac Racing in 2007.  Cooper, who won the 2015 Pirelli World Challenge GTS championship with Blackdog Speed Shop, will share the No. 11 Camaro with team owner Tony Gaples.

Pilgrim is looking forward to racing the Chevrolet Camaro GT4.R.

“It’s a real pleasure to be part of the Blackdog Speed Shop program in SprintX this year,” Pilgrim stated.  “I was considering a couple of racing options for this year when I received the call about GTSX. The opportunity to be part of the Blackdog team and drive the Chevrolet Camaro GT4.R was too good to pass up! It’s going to be a pleasure partnering up again with Lawson; it’s been 11 years since we drove together for Team Cadillac. I certainly couldn’t have a better or more experienced teammate in the GTS category. There will be a lot of great competition and new SprintX rules for all of us, but I know this team has the history and knowledge to put us right in the mix.”

Pilgrim has not raced in the United States since 2016. That year, Pilgrim drove a part-time schedule for Black Swan Racing in the IMSA WeatherTech SportsCar Championship and Pirelli World Challenge in a Porsche 911 GT3 R.  At age 61, Pilgrim brings decades of experience to the team.

For Cooper, the move puts him back in familiar surroundings.

“It’s a nice homecoming to be back with Tony [Gaples] and everyone at Blackdog Speed Shop,” Cooper said.  “This team played a big part in my development as a driver, and I was proud to win a championship for them.  The Chevy Camaro GT4.R is a beast.  It looks great and sounds great… like all Camaros do.  I’m anxious to get to race ours starting at COTA with my friend Tony.  We’ll have a good time, race hard and hopefully come away with some victories this year.  I’ve been through a season of SprintX already from last year, so hopefully that experience can help us toward another championship.”

Cooper and teammate Jordan Taylor won the SprintX GT championship last year for Cadillac Racing on the strength of one victory and consistently high finishes.  The win came at Canadian Tire Motorsports Park in May, courtesy of a convenient full course yellow that put them nearly a lap ahead of the field.

Pirelli World Challenge’s GTS class gets underway in St. Petersburg, Fla. in early March on the undercard of the Verizon IndyCar Series for the sprint rounds.  The GTS SprintX races begin a couple of weeks later at Circuit of the Americas in Texas.