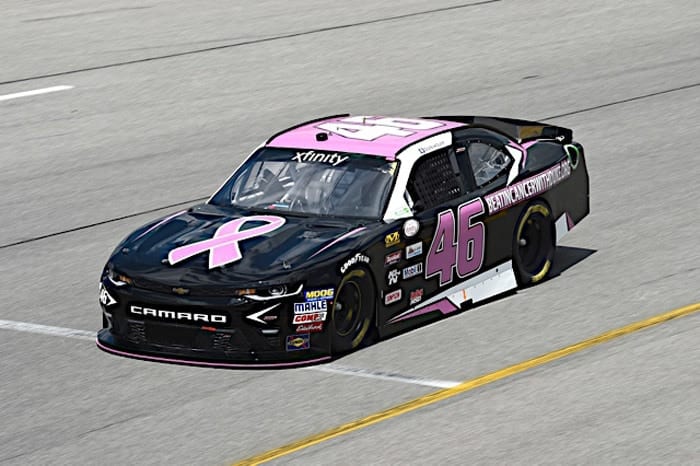 Heading into the seventh race of the 2017 NASCAR XFINITY Series season at Bristol Motor Speedway, Quin Houff was likely a name only local short track fans or ARCA Racing Series followers would know.

But at the World’s Fastest Half-Mile, Houff started 21st and at one point ran inside the top 10. The No. 46 team for which he was driving, Precision Performance Motorsports, came home 15th.

The following week, Houff finished 27th at Richmond Raceway, which earned him another shot in NASCAR at Iowa Speedway two months later, where he finished a season-high 12th.

The two performances at Bristol and Iowa, helped get his NASCAR career rolling.

“We turned a lot of heads with the performance that I had at Bristol, and backing it up at Iowa,” Houff said. “We dipped our toes into big track racing and things got a little hectic. I didn’t have quite the experience, and the team didn’t have the experience on big tracks with recent rule changes.”

Over the past two seasons, Houff had signed onto races one race at a time, thus making his ARCA deal with Mason Mitchell Motorsports his biggest racing deal yet. On Jan. 8, it was announced the Virginia native would be racing with the team for four events, starting at Daytona on Feb. 10, while also competing at Charlotte Motor Speedway, Michigan International Speedway and Pocono Raceway.

Houff will be paired with Mark Setzer, who led the way on the No. 46 pit box for his five XFINITY Series starts in 2017. But he has one goal for the four ARCA events, win.

“As far as racing goes, these four ARCA events are the only thing on the radar,” Houff said. “We take our seasons one race at a time, and we’re going to go focus on winning Daytona, Charlotte, Michigan and Pocono and go from there.”

Despite Precision Performance Motorsports recently shutting its XFINITY Series doors, Houff wants to return to the XFINITY Series. In those five events last season, he had an average start of 27th, with an average finish of 20.6. He was the only driver to have multiple top-20 finishes in the same season in PPM’s brief history in NASCAR.

Now he’s focused on proving that he has what it takes to return to the series where names are made.

“I would have never dreamed of racing XFINITY at this young of age and doing how we did with the size of the team we had,” Houff said. “It’s tough for a small race team to introduce me to the upper levels of NASCAR, and I got some experience with what that’s like.

“I enjoyed racing up there and I enjoyed my time up there. I’m hoping to get back but to get back in a bigger, better way and I’m looking forward to this ARCA deal to put the wind back in my sails.”

Despite having limited starts in a heavy stock car prior to his handful of events with PPM, Houff believes he was ready for the spotlight.

“I didn’t question it,” he said. “I kept the same mindset and didn’t let the big stage get to my head. I think that helped me a lot to stay focused as a driver and bring home some good finishes and get me on the scene.”

Like every other driver in NASCAR, Houff’s return to the XFINITY Series will likely be because of funding. In 2017, he brought local Virginia sponsors to the table but was primarily sponsored by BeatinCancerWithDuke,org.

Houff has his eyes set on a return to one of the top three touring divisions of NASCAR, but if it doesn’t happen, he already considers his career “a dream.”

“If we had the funding to do it, we would go out there and run a full-time XFINITY deal or [NASCAR Camping World] Truck [Series] deal or even ARCA deal,” Houff said. “As far as I consider, I’m already living the dream by racing in XFINITY and the ARCA race at Daytona and all these big tracks. It’s a blessing, and I don’t take any of the opportunities for granted. Anything above and beyond is more of a dream.”