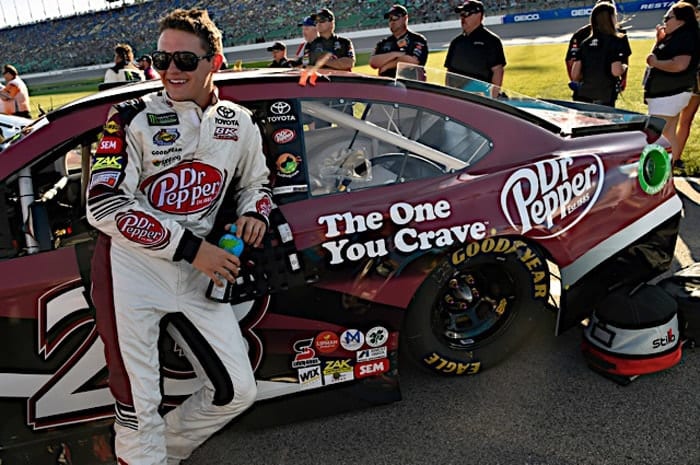 After yet another roller coaster off-season, BK Racing will attempt its seventh Daytona 500 next Sunday at Daytona International Speedway.

Ron Devine, owner of BK Racing, has signed Gray Gaulding to pilot the No. 23 machine in the Great American Race. It will be Gaulding’s first Daytona 500 start, coming off a ninth-place effort in the series’ last restrictor plate event at Talladega Superspeedway in October.

“I’m going racing with just the [No.] 23 car,” Devine tells Frontstretch. “[Gaulding] did real well in the plate races before, and he’s another year older with a whole year of experience under his belt, and we’re expecting him to be able to take that talent and experience and perform well on the track. We look forward to seeing him out there and see[ing] what he can do.”

Though Gaulding has never competed at the World of Center Racing in the Monster Energy NASCAR Cup Series, he has a pair of starts at Talladega with an average finish of 14.5. Saturday’s opening practice, also Gaulding’s 20th birthday, will be his first laps turned on the high banks of Daytona in any of the top three series.

Rick Bourgeois will get the nod at crew chief in Gaulding’s first 500 start. The sponsor will be unveiled at a later date.

BK Racing didn’t have Gaulding’s deal finalized until Friday evening, less than 24 hours before the opening practice of the 2018 season. Originally, the plan was to put Joey Gase in the car as he was registered to run in the 500, but his sponsor fell through, leaving the No. 23 car available.

“I’m always excited to be in the 500,” Devine says. “I would rather have four cars in it, but for now this will do.

“The winter wasn’t good for us, but we’re digging through it and we’re in Daytona, and we’ll go from there and see what happens. We’re so grateful, thankful and proud of the employees at BK Racing that have had to endure such ridiculous attacks on our company and been able to withstand that and still produce a racecar that can perform in Daytona, [which] speaks volumes of their capability and commitment to the sport.”

Last season, Gaulding competed in 13 of the first 14 races for BK Racing before both sides disagreed about payments. Gaulding rejoined the organization at Darlington Raceway in September en route to a 36th-place effort. He made three other starts in a BK Racing ride over the final 11 races.

Of course the question is will there be a car to drive.

With this team there could be a tow truck sitting on pit road waiting to repo it.

if it even gets that far. But some folks just seem to find a way out.

What an embarrassment to racing. Why is this team allowed to continue ? Why doesnt Nascar just take back their charter from this clown Devine and give it to somebody with some cash in their pockets. And if there arent any, Nascar should work towards helping some of these smaller teams pool their resources together and build partnered teams on solid financial ground. I’d rather see competitive races with 30 financially stable teams with competent owners than the situation we have now, where the sport has to put up with this stuff because it thinks it needs 40 drivers in a race. Times change.

unfortunatly they are barely going to field 40 cars for the most important race of the year. Nascar is the embarrasment where sponsers can’t afford to fund teams because of cost. Nascar needed to do a better job keeping cost down and they failed.