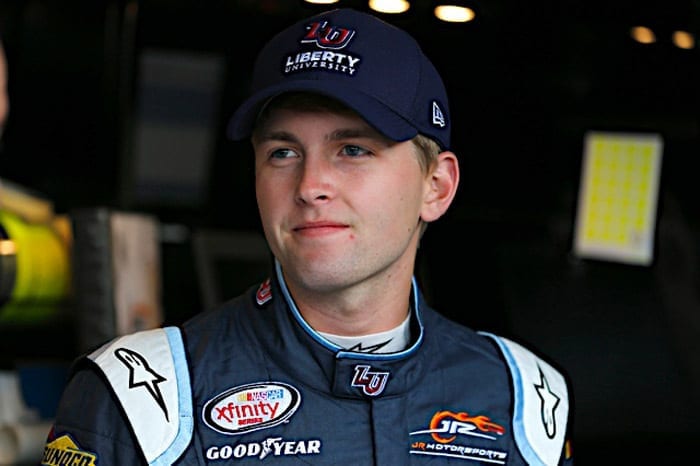 Saturday was the official start of the 2018 NASCAR season. There was one morning practice and two afternoon practice sessions, all for the Monster Energy NASCAR Cup Series. Work for the Advanced Auto Parts Clash was paired with the opening on-track time for next Sunday’s Daytona 500.

In the morning Clash session, the Fords of Ryan Blaney, Joey Logano, Ricky Stenhouse Jr. and Brad Keselowski posted the fastest four times. Kyle Busch was quickest in the first 500 practice while rookie William Byron ran the best lap of the day in the second session.

With the elimination of the ride height rule for restrictor plate races this season, the cars are tight to the ground. They’re oddly skewed for maximum aerodynamics and lightning quick on the speed charts. Byron’s lap at 201.649 mph came even after NASCAR made a gear change to slow the cars down. Even with the adjustment, Byron remained just two seconds off Bill Elliott’s unbreakable non-restrictor plate pole record.

The main conclusion to take away from Speedweeks opening day was manufacturer related. Toyotas across the board were strong despite a roster that pales in comparison to Ford or Chevrolet. Four Joe Gibbs Racing entries and one Furniture Row Racing Camry are the only competitive Toyotas in the field.

But what those cars lack in number, they make up for in both unity and exclusivity. Those drivers also combined on some Saturday strategy. Nobody knew how the Camry drivers would perform in the draft against the new Camaro bodies for most of the day. That’s because they were unwilling to race in a pack with the other drivers. It took until the closing minutes of the final session for them to join in with the others; that’s when their superior speed came out.

Meanwhile, the Chevrolets, particularly the Hendrick-powered Camaros, have been pretty quick in single-car runs. But the Fords were faster on the chart during Clash practice when both makes were involved in one pack.

The lone practice session for the Clash happened before the afternoon 500 practices. The 17-car Clash field spent the vast majority of the 80-minute session doing single-car runs.

Midway through the practice, the four Toyota drivers (Busch, Denny Hamlin, Erik Jones, and Martin Truex Jr.) decided to race together in a pack for over 10 laps before breaking up. In the closing minutes of the session, the majority of the rest of the field spent some time in one pack. But overall, it was mostly single-file as drivers adjusted to new 2018 handling characteristics.

The first practice of the 500 was almost all single-car runs. As time wound down, the four Gibbs Toyota drivers went out and drafted together as the only pack of the entire session. Midway through, the practice was red-flagged due to transmission fluid from the No. 9 of Chase Elliott that took 16 minutes for NASCAR to clean up.

The second practice for the 500 was calm for forty minutes before some excitement in the final 10. As time wound down, a fairly sizable amount of race cars came out and drafted together in a pack. That caused close calls, particularly between Byron and Hamlin, but everybody ended up OK and there were no incidents to speak of.

I made 3 predictions for the “POLE”. I am adding one I overlooked. ALEX SHOWMAN BOWMAN, taking over for JJJJJUUUUUNNNNNNNYYYYYYYYYYER. I now have 4. Will see. LOL.