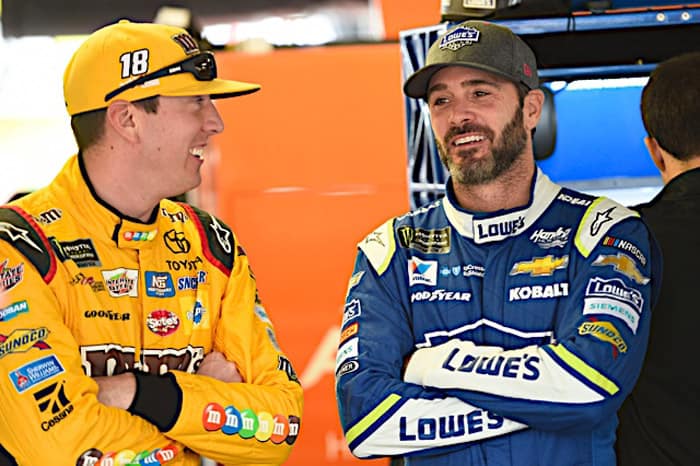 “I like Martin Truex Jr. and all, but I hope he doesn’t dominate like he did last year.  He won too much; it was boring.”

This topic came up in a conversation during the offseason, where the racing talk turns to deeper discussion debating the finer points of the sport.

As a philosophy, “winning too much” was center stage last weekend, with Super Bowl season in full swing.  A huge number of football fans who otherwise had no dog in the fight latched on to the Philadelphia Eagles simply because they didn’t want to see another New England Patriots victory.

They hated the Patriots because… well, after a moment’s pause to think about the actual reason… they win too much.

So, is winning too much a thing?

It’s easy to understand part of the argument.  If one team is dominating a sport, that doesn’t exactly translate into a lot of variety.  Truex won nearly a quarter of the races last season, while a few popular drivers (Chase Elliott, Dale Earnhardt Jr.) didn’t win at all.

It’s also human nature to root for the underdog.  And let’s face it, in NASCAR, there aren’t a lot of opportunities for underdogs to score top finishes. That’s magnified when one or two drivers are taking what some feel is more than their fair share of the pie.

At the heart of it, of course, is the unspoken part of the tale: if the guy doing all that winning isn’t their guy…well, it’s easy to jump on the wins-too-much bandwagon. If the driver a fan invests in T-shirts and diecasts bearing his likeness wins every other week, well, they don’t complain a lot.

The fan in the above conversation is, ironically, a Jimmie Johnson supporter, proving the grass-is-always-greener adage.

So let’s take on Johnson for a minute.  The 16-year veteran has averaged just over five wins a year with seven titles along the way, including five in a row.  Johnson is the poster boy for winning too much in the 21st century.  As an added bonus, Johnson drove for Jeff Gordon, the driver who won too much before Johnson horned in.

In addition to the victories, Johnson has often been described with such adjectives as “boring,” “vanilla,” and “robotic.”

So is his personality more to blame than his record?

Well, no.  Consider his polar opposite, Kyle Busch. Brash, outspoken, and dramatic, Busch is anything but boring, but, damnit, he wins too much, too.  In 13 full seasons, Busch has averaged 3.3 wins a year and earned a title to boot.  (Busch’s XFINITY and Truck Series wins aren’t included in that total, and his Godzilla-esque trashing of those divisions in recent years, while a separate matter altogether balloons the numbers even more.)

Truex won eight times last year… and he won too much.  A couple of years ago, it was Joey Logano.  Lest anyone think it’s a new phenomenon, fans thought Dale Earnhardt did the same. Darrell Waltrip, David Pearson, Richard Petty… you name the driver, and someone will tell you he won too much.

Those allegations are not entirely without merit.  Every driver mentioned has been at the center of a penalty and the subsequent talk. Some have been involved more than others. Just for fun, look up some of the blatant violations undertaken by Petty Enterprises in their heyday. Many of those turned later into admissions of guilt.  Talk of NASCAR favoritism always surrounded Earnhardt, Gordon, Johnson, and Busch.  Last year, many questioned whether the Toyotas had an advantage and whether NASACR looked the other way.

But at the end of the day, playing it safe doesn’t win races or titles, so the ones who push the envelope are the ones who eventually find something in a grey area of the rules they can work with. That’s part of why they thrive.

Creativity doesn’t excuse breaking the rules, and NASCAR doesn’t and shouldn’t tolerate an illegal car.  It does, however, mean pushing the rules to the ragged edge. That’s racing, always has been.

When all is said and done, dynasties rise and fall.  The wins for even the greatest driver will taper, and one day, he’ll stand in Victory Lane for the final time.

When that happens, some of the vitriol will be forgotten, and he’ll be remembered for his accomplishments. Gordon’s a great example. When he won for the final time at Martinsville, fans didn’t boo him like they had when he was dominating every week. Instead, they were reluctant to leave, knowing instinctively that it would probably be the last moment “Wonderboy” celebrated in front of them.

As one driver fades, another will rise. Someone else will be winning too much in five years when the sport celebrates its 75th birthday.

The idea of being too good is one unique to sports fans. But as long as someone other than their team is too good, the myth of winning too much will go on — even if there was never such a thing to begin with.

True dat.
But that kind of shows that the myth of winning too much, isn’t a myth at all. It’s a fact. It’s human nature.
To me the cheating, bending the rules, whatever you want to call it, really magnifies that dislike for the guy that wins too much. After they have won so much and you hear Knauss tell Johnson to make sure he backs it into the wall if he wins or see that Brady used deflated balls, it kind of pisses you off because it makes them look like pigs. They are supposed to be the best and, if they are the best, why are they not playing straight up. Cheating is for those that aren’t the best because they need something to equalize the disadvantage.

There is a sense of entitlement that comes with winning that makes humans more willing to bend the rules. I saw this article in the Washington Post a couple of years ago. It discusses this topic and how it isn’t just in sports that you see it happening. I found it to be pretty interesting…
https://www.washingtonpost.com/news/wonk/wp/2016/02/08/why-winners-become-cheaters/?utm_term=.1feadcc42d34

I would still like to know how old man Truex who had a terrible time in CUP for 12 years with only 3 wins. suddenly wins on a consistent basis the last two years?????????? It was pretty obvious Castle Daytona was gunning for him, the story of the sick house mate surely helped Marty out..TOYS, TOYS. TOYS. The season before last he wins 4 races and last season 8? How can anybody not question that? He has 14 years in CUP and finally “wins” the last two years, come on. I don’t buy it for a minute. Vince McMahon was/is more subtle than BZF regarding this circus act. His stats don’t lie, look them up…something was and is “off” hugely..imo.

i would be far more suspicious of the car than I would be Daytona Beach. Yet,your point that somebody doesn’t suddenly learn to win is valid.

Chances are Truex just had a career season, a lot of things went his way, it was a year where the Toyota’s had an edge with a new car (I suppose you could argue that NASCAR let then have that advantage when the approved the car), and FRR had their act together. My bet is he most likely never wins more than 3 races in a season again.
As for why it took him so much longer to have that breakout season compared to the other’s I listed above, he’s been on struggling teams for most years. DEI after Dale’s death and the turmoil that came with it, and then MWR which was a start up team that never could rise to the top tier level before it all came apart.
The point is there are occurrences like this in all sports. Where an athlete had a year with stats that they could never match again, before or after. It just happens sometimes.

Winning is 90% car is this era of racing (NASCAR, F1, INDY CAR. Almost any driver now put in a good spot at the end of a race can hold on for the win. Exception; Danica.
It is the ignorant fans who have created this subject. Don’t you really want to see man getting the best he can from his engineering and skill in a race car?
Remember the shirts; ANYBODY BUT KINSER. At the end of their careers the same fans wanted to see Kinser, Petty, Foyt and Shumacker win races. Their winning records will never be eclipsed.