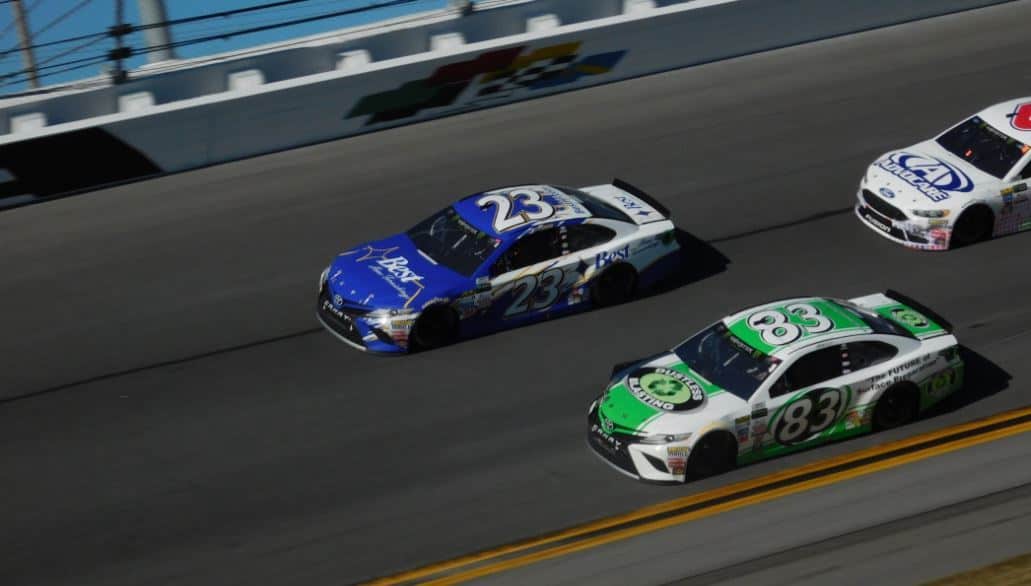 2017 was a year of transition for BK Racing. While still competing full-time in the Monster Energy NASCAR Cup Series, the team had seven different drivers compete in at least one race for the organization. Producing just one top-10 finish between them, BK hopes for a better outcome entering the 2018 season.

However, up until the night before the first practice to kick off the 2018 NASCAR season, BK Racing had no driver for the Daytona 500. Ron Devine, owner of the race team confirmed to Frontstretch that Gray Gaulding would be piloting the No. 23 car in the Great American Race.

Add this dilemma to the list of problems Devine had to encounter over the past 12 weeks.

On Nov. 17, 2017, Union Bank & Trust (Devine’s bank) out of Virginia filed a lawsuit in North Carolina Superior Court (first reported by ESPN). In the lawsuit, the bank stated BK Racing owes it $9.1 million on a loan that included its two charters as collateral. Up until this past week, Front Row Motorsports had purchased BKR’s second charter, leasing it to TriStar Motorsports in 2017. On Feb. 6, it was announced TriStar Motorsports had acquired the charter.

Also on Feb. 6, BK Racing was set for its hearing against Union Bank & Trust. However, that was pushed back until Thursday, Feb. 15, the same day as the Can-Am Duels. According to reports, a temporary restraining order remains in effect that keeps Devine from selling assets or his charter.

Regardless, Devine is ready for the season to begin and is planning on running the full schedule uninterrupted.

“BK Racing has been under a lot of stress and a lot of fire,” he said of the offseason. “I’m so grateful for the employees at BK Racing that have endured all of this nonsense and put up with it. It helped us get through yet another winter – we’re not good at getting through the winters, we haven’t figured it out yet, but to help us get through a winter. The good employees that have stuck with us to try and help us make something out of this, we’re forever grateful to and we will be loyal to them.

“God bless NASCAR for putting up with all the nonsense around us. I’m so grateful. My goal this year is to clean that up.”

Devine confirmed that he intends on competing in the full 36-race schedule with the No. 23 machine in 2018, although a complete driver lineup has not been unveiled. He still owns the No. 83, but isn’t sure whether he will take it to the track or not in 2018 after placing at the top of the open division last season.

“The only problem we’re having is to whether or not we’re putting the [No.] 83 on the track,” he said. “I should have taken two [cars] to Daytona. I should have never have given up that spot.

“Unfortunately, we couldn’t get ourselves together. We have so many problems right now with changing our business – that’s why you see me changing complete personnel. When you finish last, bad things happen and that’s where we’re at. We have to fix that.”

The organization, which has struggled to obtain sponsorship, lost some of its backers from last season. Schluter Systems went with Corey LaJoie as he departed BK Racing over the off-season and is competing in 25 events for TriStar Motorsports. Devine also mentioned that there are other partners that have left the company.

Despite veteran crew chief Doug Richert departing at the beginning of the new year, BK Racing still employs upwards of 30 people. However, it may be the decision in the court ruling on Thursday that gives a better understanding of where the race team will head going forward.

“I’m still here, I’m still racing and I still love this sport. They are lucky I am who I am, otherwise there would be one more guy missing out of the garage. That’s a real shame.”

So how can he sell the second charter to another team and at the same time it is used as collateral in an outstanding loan? Is that even legal? Reading his comments makes me think he is not on the up and up.

FRM either didn’t run the purchase through their lawyers or their lawyers really screwed up is what happened. Normally, a business wouldn’t purchase something that valuable without making sure nobody has a lien or other claim on it.

It seems as if he’s playing the victim card here, blaming the people he owes LARGE amounts of money to for all that nonsense.
Its stuff like this that continues to give the sport a black eye in the world of major league sports.

I’m sure the so-called bad publicity has nothing to do with the fact that almost every driver has had some kind of issue being paid by this guy.