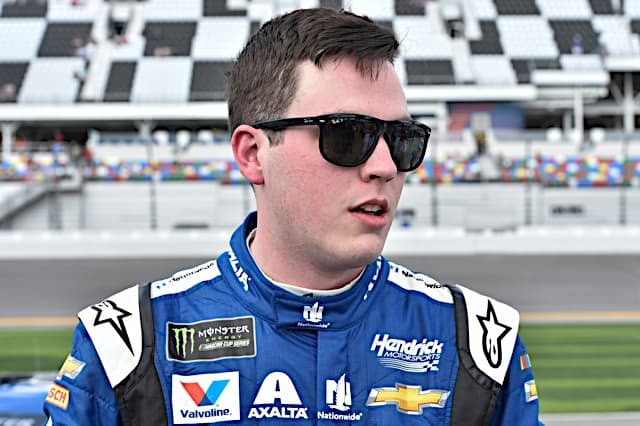 Hendrick Motorsports’ Alex Bowman showed the field on Sunday (Feb. 11) that he had the best car in town by himself.  Bowman won the pole for next Sunday’s Daytona 500 in the Monster Energy NASCAR Cup Series with a lap of 46.002 seconds (195.644 mph). He was also fastest overall in round No. 1 with a lap of 46.181 seconds (194.885 mph). It was a perfect start for his first race replacing Dale Earnhardt Jr in the No. 88 Chevrolet.

“It was a little nerve-wracking,” Bowman told FOX Sports’ Jamie Little after his lap.  “I thought we were at a little disadvantage letting the car cool down as long as we did since we went so early.  I was a little nervous, but the car took off well off pit road.  I did everything I could do, but it comes down to the crew and the guys back in the shop.”

Bowman’s lap was one-eighth of a second faster than Joe Gibbs Racing’s Denny Hamlin in second.  Those two drivers, assuming that they don’t have to change an engine or go to a backup car sometime next week, will be locked into the front row.

Chevy and Toyota swept the first row, but Ford had their share of drivers up front. The top 12 positions were an even 4/4/4 split among NASCAR’s trio of manufacturers. All four Hendrick Motorsports drivers along with the Joe Gibbs Racing quartet made the final round of qualifying.

Notables outside of the top 12 include Ryan Blaney in 15th, Kurt Busch in 17th, Brad Keselowski in 19th and Kyle Larson in 22nd.  Danica Patrick started her “Danica Double” off by qualifying 28th fastest.

Only 38 drivers turned in times during the session.  According to Front Row Motorsports, David Ragan‘s No. 38 Ford had a brake issue during his run that made it difficult to accelerate and chose to bring it in without setting a time.

The other driver that failed to set a time was BK Racing’s Gray Gaulding.  The BK Racing Toyota failed to get through inspection before the five-minute clock expired.

The car has passed all inspection stations with the exception of the engine inspection, Gray will start at the tail of the field in Thursday nights duel -PR pic.twitter.com/20KFQZtir3

The starting order for the remainder of the field will be set by Thursday night’s Can-Am Duels.  Coverage will begin at 5:30 p.m. on FOX Sports 1.

LOL, who did not see this coming. BZF is an ass. I had 4 picks, ALEX being one of them.

In no particular order…I was thinking the following:

Little Clyde—–switching to Big Clyde’s number to energize and motivate people to root for him. You know the most popular driver, blah, blah, blah. Too funny.

“Bubba” Wallace. Half black driver going to drive for RPM, and RPM switching from Fords to Chevy’s.

And last but not least Alex Bowman, same tactic they used a few years ago putting Dilllooon in the number 3 as a Rookie. Same idea here, calming to sheep to accept Bowman in Gooyner’s car.

Stevie Wonder saw this coming. HOW EMBARASSING. A few friends and I were discussing this “unforeseen” event this morning and were laughing, we all knew it was coming..and BZF THE PT BARNUM of MOTORSPORTS did not disappoint…again!

Say, can you and your friends pick some winning lottery numbers for me?

It’s not the same thing. The lottery isn’t fixed.

AMEN. I always laugh cause it is so easy to see these things, and people don’t get it. They just don’t. They really wanna believe that Bowman, Elliott, Patrick, Dillon etc. ROOKIES beat out seasoned vets their very first try in Cup at Daytona for quals! COME ON!!!!! And each with a storyline coming into the season that NASCAR can spread the joy over the AP NEWSIES that nobody is going to read or give a shit about.

I saw it coming because Hendrick has won 75% of restrictor plate track poles over the last 3 years. Guess the other teams are too stupid to know that it’s fixed and they keep spending money trying to win the pole.
Picking a Hendrick car for any pole on an RP track is like picking the Patriots to make the playoffs or predicting 6:00 at 5:30.

i called this one 3 weeks ago. shame i can’t pick winning lottery number.