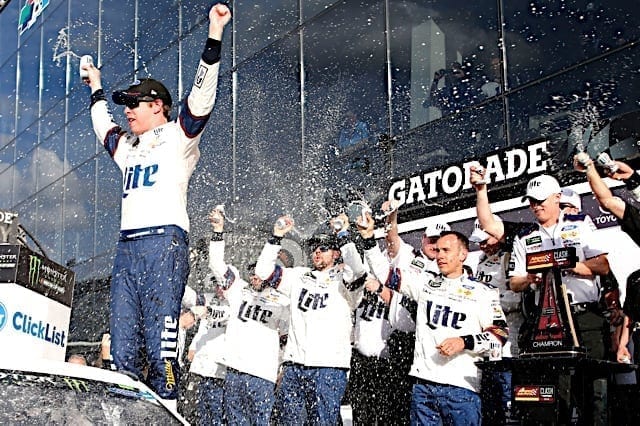 NASCAR’s first race of the year at Daytona saw plenty of intense pack racing with drivers adjusting to 2018 ride height rules. But the ending of the non-points Advanced Auto Parts Clash at Daytona proved near perfect for one organization: Team Penske.

Brad Keselowski scored the victory, cruising out in front as teammates Ryan Blaney and Joey Logano rode behind until racing for the win on the final lap. Keselowski wound up holding off Logano for the Clash victory while Blaney finished a strong fourth.

For Keselowski, it was his first Clash win coming in his sixth career race start. It put a Ford in yet another restrictor plate Victory Lane, the perfect follow-up to its 2017 season sweep.

“This is the first time I’ve won anything at Speedweeks. I feel like I’ve choked them away,” Keselowski said, who rallied from starting last. “It’s nice to not choke this one away. The guys really had to show up with a different car and that’s a testament to Team Penske. A great start to Speedweeks. Two more to go.”

When Keselowski took the lead with 43 laps left in the 75-lap race, teammates Blaney and Logano made it a Penske 1-2-3 for the remainder of the event. A single-file second half of the race, drivers fighting ill-handling cars left the trio virtually unchallenged.

Logano, despite a last-gasp attempt at the lead, came up short of defending his Clash victory from 2017.

“Handling definitely came into play,” Logano said. “The moves are hard to make because you’re out of control out there! I’m amazed we didn’t crash more than we did. What a day for Team Penske, all three of us up there.”

Blaney was the first driver to challenge his teammate entering the stretch run. But his attempted pass on Keselowski during the white-flag lap proved to be a mistake.

“I thought we were in a good spot, I was trying to time when we got a run,” Blaney said. “I turned to the bottom on Brad and it just wasn’t the right time. That’s partly my fault. I could’ve done a lot better.”

Kurt Busch was the highest non-Penske driver, finishing third in his No. 41 Stewart-Haas Racing Ford.

“Project No. 1 was running all the laps,” Busch said. “It was a blast to be out there. It’s a challenge, but it’s fun. Ultimately, a lot of Fords up front. Those Penske guys haven’t missed a beat.”

Busch avoided a couple messes en route to the result. That included contact with 41 laps to go involving Jamie McMurray, who spun into the Turn 4 wall. Additionally, he squeezed past the Big One on the final lap when Jimmie Johnson crashed with Kyle Busch, Chase Elliott and others.

Johnson has now wrecked out of the last seven Clashes at Daytona. Kyle Larson admitted to starting the wreck, which began with a bump draft gone wrong between the new Chevrolet Camaro bodies.

“I got turned quick,” the seven-time champion said. “I need to look back on the video to see if [Larson] got me straight and maybe that was a contributing factor to it.”

Larson admitted the cars were “a handful” as many drivers commented on how difficult Daytona was to drive. Suggestions ran the gambit for Sunday’s Daytona 500, from those looking to improve handling to Kyle Busch’s suggestion they make it worse. “The cars are too equal,” Busch said after the race, claiming the new rules lessened the ability for a driver to pull a slide job on someone else.

They don't call it "The Clash" for nothing. Things got WILD Sunday on the last lap at Daytona.https://t.co/pl5ws6RUOY

Big deal. Penske always does well at plate tracks. The test will be the mile and a half tracks. Which they did not have much success at all last year.

Next weeks 500 could either be a repeat of the 2000 sleep fest or a demolition derby of historic proportions. Because of ill handling cars not designed to run close together at plate tracks drivers will be content to stay in line and not make any moves. If they do it will be late in the race and take out most of the field. Why did Nascar add to the height of the spoiler then change the ride height rule to negate the added drag? If drivers choose to go up the middle lane it will be because they want to get an early start on the week off

Penske will be the team to beat this year!

Penske started out strong last year until the Gibbs Toyota teams got their cars figured out. A lot can and does happen over a long nine-month season. The team to beat in the Spring may be struggling mightily by the fall.