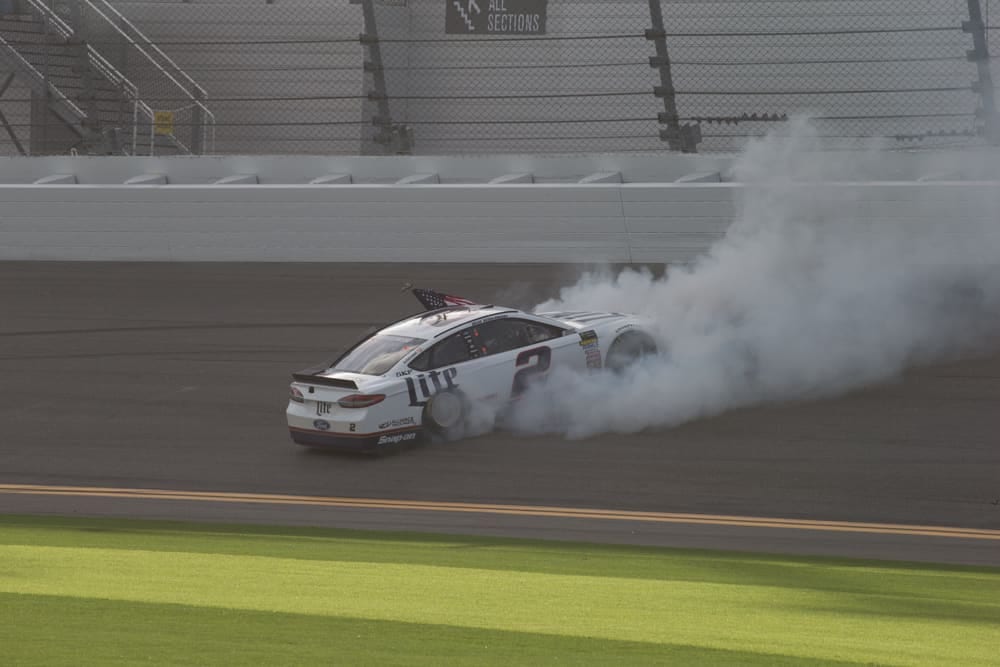 It was double the pleasure, double the fun Sunday at Daytona. The Advance Auto Parts Clash and Daytona 500 qualifying both took place, jumpstarting the 2018 NASCAR season.

When the dust settled, Hendrick Motorsports claimed its fourth Daytona 500 pole in a row. Alex Bowman put the No. 88 on top of the charts in his first run as a full-time driver for the organization.

In the Clash, it was Brad Keselowski who finally broke through to claim a February win at Daytona. Keselowski led the final 37 laps of the exhibition race to score his second career win at the 2.5-mile superspeedway.

In Daytona 500 qualifying, Bowman was the fastest car in both sessions. The initial runs saw his No. 88 lay down a lap of 46.181 seconds for a speed of 194.885 mph. Denny Hamlin was second quick with a 194.801 mph lap, while Ricky Stenhouse Jr., William Byron and Kyle Busch rounded out the top five in the opening round. David Ragan and Gray Gaulding both failed to take a qualifying time and will start shotgun on their respective qualifying races.

In the second session, with the final 12 drivers, Bowman and Hamlin were again quickest and will start the Daytona 500 from the front row. This year marks the fourth consecutive that Hendrick Motorsports has had a car start on the pole for the 500. Jeff Gordon was fastest in 2015 while Chase Elliott started from the top spot the last two years.

In the Clash, the action was hot and heavy early in the race with six drivers swapping the lead seven times in the first 25 laps before the competition caution waved. There were three more lead changes after that, aggression continuing before the only yellow for an incident on the track waved as Jamie McMurray and Kurt Busch wrecked in turn 4.

From that point on, the drivers fell into line and were unable to make any moves to get past Keselowski. There was plenty of action back in the pack, including a moment where Stenhouse Jr. was forced below the yellow line while attempting a pass. He was penalized for gaining a position which set off a firestorm on Twitter spearheaded by a heated discussion between NASCAR VP Steve O’Donnell and NBC Sports analyst Dale Earnhardt Jr. It is a safe bet that will be a hot-button topic for the remainder of the week leading up to the 500.

I thought if you were forced below the line, no issue. Possible penalty for the blocking party. https://t.co/5zcWw5Fftr

As long as you don’t advance your position. He did https://t.co/HJbXf1Aq5M

That’s not always been the case for the last 15+ years. When did this change? We have allowed others to advance if it was clear they were forced below the line. https://t.co/dfQU6q0i4V

Can’t be more clear than what is played at every Speedway driver meeting and was talked about this morning as well. You can’t advance your position. Only judgement is if position was immediately given back. It was not. https://t.co/KenHUkpumO

Clear as mud. Let’s get rid of the yellow line rule and both be happy. https://t.co/mBVgnMmKlS

Qualifying for the Daytona 500 is quite possibly the most meaningless session all year, as only two positions are locked in for the race. It is even more meaningless this year thanks to the fact the entry list for the 500 is only 40 cars, which means all who show up will start the event. In the end, there will probably be a greater chance of the Big One on Thursday as teams rush to pit road to park. Expect many of the small teams to pull in early to avoid damaging their 500 cars for no reason.

As for the Clash, Sunday’s calmer finish isn’t the first time we’ve seen this trend develop. The aerodynamic package for plate races in 2018 is the same as all of the other events. That’s a major change, considering the teams had run a unique aero package on plate tracks since 2013. The end result is that handling was an even greater premium at Daytona and that ultimately meant the drivers didn’t take as many risks during the race.

We have seen this before in the Clash when aero packages were changed (remember those 2013 races?). Drivers don’t want to put themselves in compromising situations when they aren’t certain what their cars are going to do. But in the end, driver ability is going to come into play more than it has in years past and that will be good for the sport long-term.

The biggest story coming out of Daytona so far this year is the lack of entries. Not only for the Cup race, with only 40 cars on the list, but for the Truck Series as well. The list hasn’t been published yet but rumors are swirling there will be less than 30 trucks entered for the event. The sport has some amazing young talent in all three national series and the potential is there for some fantastic competition. Unfortunately, the business model that is currently in place seems to be greatly limiting the interest of potential new owners. With the age of the current owners in the sport skewed far towards the AARP set, something needs to happen to draw in new blood or there could be major problems not far down the road.

Speaking of the Truck Series, director Brad Moran was in a press conference at Daytona this week talking about fans’ concerns surrounding the lack of short tracks on the Truck schedule. He answered them by pointing out the schedule for the series is “diverse.”

There is no doubt there is some diversity in the schedule, but many of those tracks are not what the Trucks were built on. The series was established running short tracks across the country during the late 1990s. They were set up with determined breaks so that teams did not have to hire pit crews to do live stops.

The Trucks then made the ultimate mistake and raced at Daytona. From that point on, short tracks were quickly dropped from the schedule as mile-and-a-halfs filled in their positions. The predominant reason for that is it is far more economical to show the races on live television when they are companion events with the Cup Series.

Unfortunately, that decision has been at the expense of the character of the series. It’s also drastically cut the roster of teams competing. While changing the schedule now is high risk, it could be worth it to eliminate all tracks over 1.3 miles and move the races back to the short tracks, coming full circle to where the series began. An exception can be made for the road course race in Canada, a unique track for all of NASCAR. But the trucks to do not need to run at any of the cookie cutter mile-and-a-half tracks or the Daytona-style superspeedways.

NASCAR is still looking for a pole award sponsor for 2018. There are negotiations ongoing but, at this point, nothing has been finalized after sponsor Coors left last season. That’s a potential $4 million deal (and boost to the teams who win the pole) yet to be completed.

BK Racing pulled into Daytona with the No. 23 to compete in the 500. Gray Gaulding will pilot the car for now. But the ongoing financial difficulties for the team put the future of the No. 83 in doubt and, in reality, the future of the whole team in question. Ron Devine has every intention of competing in all 36 races of the 2018 Cup season running the No. 23. But there are some behind the scenes intricacies with the bank that is suing over monies owed that were borrowed to purchase the charters for the team. Look for more in the near future on this situation on Frontstretch.

Jimmie Johnson is a seven-time Cup champion. Unfortunately, he continues to shoot himself in the foot on pit road which is making his life harder on the racetrack. Johnson was penalized during the Clash for driving through more than three pit boxes. That same penalty bit him multiple times in 2017. If Johnson is going to break the record and win an eighth title, he needs to tighten up these minor mistakes that cost him crucial track position. Stuck in midpack, a last-lap wreck with Kyle Larson left Johnson failing to finish the Clash for a seventh straight year.

Ford spent a good chunk of last year pointing out its disadvantage compared to Toyota. We’ll probably hear it even more with Chevrolet having the new Camaro body in 2018. But one thing they cannot complain about is their restrictor plate success. In 2016 and ’17, the Blue Oval brigade won seven of the eight plate races. In the Clash on Sunday, it claimed the top four positions. Single-car speed might belong to Chevy and Toyota but the Fords continue to be dominant in the pack.

The Daytona 500 may be an awesome race thanks to the new aero package. But the Clash was another chess match of a bunch of pawns making one square moves and little else. Optimism is high for the 500 and other plate races thanks to greater input from the drivers with this package. However, the race on Sunday was lacking for sure. We’ll give it two lukewarm Daytona Blondes from the Daytona Beach Brewing Company.

The biggest stock car race in the world is next Sunday at Daytona International Speedway. Coverage of the race begins at 2:30 p.m. ET on FOX. It can also be streamed on the FOX Sports Go app. You can listen to the race on your local MRN affiliate or on SiriusXM NASCAR Channel 90.

played out like most plate races do. i see the massive wreck when the run for the checkers started.

Way to come from the back and win Kez! It’s going to be a great year for Penske! BEST drivers on track, hands down!

On this “diversity” of Truck Series venues, these are the same mouthpieces that insult our intelligence when they consider Phoenix and New Hampshire short tracks.