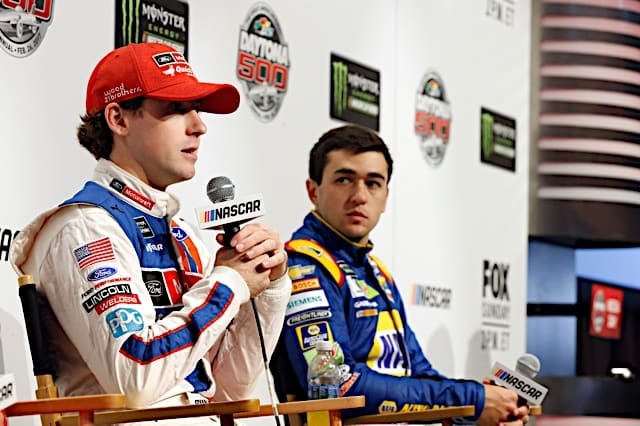 After a wave of 2017 retirements, a youth movement has turned into a tsunami, in position to take the Monster Energy NASCAR Cup Series by storm.  The top division of professional stock car racing is awash with fresh talent, poised to be a major storyline as soon as this Sunday’s Daytona 500.

Most of the young racers have made their way to their current rides within the last two or three years.  Some of them have replaced longtime, popular veterans and have big shoes to fill.  Two of the 2018 rookies will be piloting two of the most iconic cars in NASCAR: Nos. 24 and 43.  Many of the newcomers have honed their skills with racing simulators and have an engaging social media presence.

NASCAR has taken to promoting this new crop of drivers heavily, to the chagrin of at least one veteran racer, Kyle Busch.  But nobody can seem to stop talking about the new Young Guns replacing the old Young Guns.

This new generation of racers has become the darlings of NASCAR.  However, young drivers have traditionally not been successful with the sport’s other darling: elimination-style playoffs.  In the four years that NASCAR has used the current Cup Series format, no driver with less than six years’ experience has ever qualified for the championship round at Homestead-Miami Speedway.

Is that trend poised to change in 2018? Now, the MENCS division will offer lots of rising stars with fast cars. Who among them can break the historical trend and reach the final race of the year in title contention?

Admittedly, the first year or two of the elimination-style playoffs suffered from a lack of competitive, young drivers in NASCAR.  While the 2014 season featured a large rookie class, few of those drivers were in quality equipment.  Of those who qualified for the 2014 Chase, Aric Almirola was the least experienced.  At age 30, Almirola was in his third season of full-time competition but had run almost another full year’s worth of races part-time before joining forces with Richard Petty Motorsports.

Joey Logano, the youngest competitor in the Chase that year, was successful in reaching the championship round.  However, a botched pit stop took him out of contention for the win, leaving him last amongst the Championship 4.  Logano was 24 years old at the time of the race and was in his sixth full-time season competing in the Cup Series.  Nobody has ever qualified for the championship round at a younger age or with less experience.  In fact, Logano was the only driver under age 30 to reach the round of eight.

The 2015 postseason field was also full of veteran racers.  Logano was once again the youngest, while his teammate Brad Keselowski was the least experienced.  At the time, Keselowski was in his sixth full-time season in the Cup Series and had already won 17 races and a championship.  The Michigan native may have lacked the years of experience his peers possessed, but certainly, he entered the postseason as a battle-tested racer in the Cup Series.

Kyle Busch emerged as the champion in 2015 and as the youngest driver of the Championship 4 that year at age 30.  Busch was in his 11th season of full-time competition when he won the big trophy.  Fellow title contender Martin Truex Jr. actually had one less year of Cup Series competition under his belt than Busch.  But with Jeff Gordon and defending champ Kevin Harvick completing the list of four finalists, experience trumped youth in 2015.

The postseason finally started to get a younger look in 2016.  Chase Elliott and Chris Buescher became the first rookies ever to qualify for the elimination-style playoffs at ages 20 and 23, respectively.  Joining them were third-year drivers Kyle Larson (24) and Austin Dillon (27).  By the round of 12, only Dillon and Elliott were still in championship contention, and both of them ran into trouble at Charlotte Motor Speedway.

At CMS, Dillon was able to get to the front of the field by taking two tires during a late pit stop under yellow.  But on the ensuing restart, Dillon got hit from behind by Truex and spun out. That set off a chain reaction crash which collected Elliott.  Even with two races left in the round, both drivers were in too deep of a points hole to advance.  Dillon’s elimination was particularly agonizing, losing out on a tiebreaker to Denny Hamlin.

So a younger Chase field ultimately did not make much difference in the 2016 championship battle.  Logano, now an eight-year veteran, faced off against Busch, Jimmie Johnson, and Carl Edwards for the title, with Johnson coming out on top.

The 2017 season brought a new entitlement sponsor, stage racing, and playoff points.  The postseason field suggested that this time, maybe youth would be served.  Elliott, Larson, and Dillon all returned to the NASCAR Playoffs, while 23-year-old Ryan Blaney made his first appearance.  Fifth-year driver Ricky Stenhouse Jr. also raced his way in for the first time at age 29.

By the round of 12, all of them except Dillon were still in the championship hunt.  Larson and Elliott, in particular, looked like they could make deep runs.  Larson had a pile of playoff points that gave the No. 42 team some extra insurance, while Elliott seemed to be knocking on the door of Victory Lane almost every week.  However, a blown engine at Kansas Speedway ended Larson’s championship dreams; only Elliott and Blaney proceeded to the round of eight.  Their competition included no drivers with less than eight years’ experience.

Neither Elliott nor Blaney would advance to the championship round.  A lack of consistent speed and bonus points dashed Blaney’s hopes.  Elliott, meanwhile, got into a war of words, and bumpers, with Hamlin after getting spun by the No. 11 at Martinsville Speedway.  Elliott exacted revenge on Hamlin two weeks later, at Phoenix International Raceway, but got out-dueled by Matt Kenseth and was unable to secure the win he needed to reach Homestead. That left Keselowski as the least-experienced racer of the Championship 4 in 2017, joining fellow veterans Busch, Truex, and Harvick.

The 2018 season will likely have more young racers in the Playoffs than recent years through numbers alone.  Yet most of those youngsters will lack experience racing for a Cup Series title even if they do reach the postseason.  NASCAR would be wise to promote its young stars, but those racers will lack legitimacy if they do not contend for wins and championships.

For most of the new “Young Guns,” the best solution to the problem of the playoffs is time.  Larson, Elliott, and Blaney all demonstrated improvement from 2016 to last year.  With more and more veterans stepping away from the sport, there is a window of opportunity for the new crop of drivers to make a name for themselves.

However, history suggests that it will take them at least three or four tries to reach Homestead’s final round.

Heading into 2018, the newest group of drivers in the Cup Series should have different agendas.  First-year wheelmen like William Byron and Darrell Wallace Jr. should be most concerned with logging laps and gaining experience.  Second-year drivers like Erik Jones and Daniel Suarez should focus on winning and making the playoffs.  Racers like Stenhouse, Alex Bowman, Buescher, and Austin and Ty Dillon should concentrate on producing consistent speed each week.  Making a deep championship run would be gravy for any of these drivers.

However, the sights of Larson, Elliott, and Blaney should be set higher.  If they keep improving at the rate they did last year, all three could potentially make the championship round in 2018.  Larson will have to perform better in the playoffs, Blaney will have to get used to his new surroundings, and Elliott needs to find some way to turn all those second-place finishes into wins.

If NASCAR’s youth movement is going to carry over to the most important aspects of racing – wins and championships – Larson, Blaney, and Elliott will be the ones leading the charge. They’re the key to the next generation turning their much-hyped potential into on-track reality.