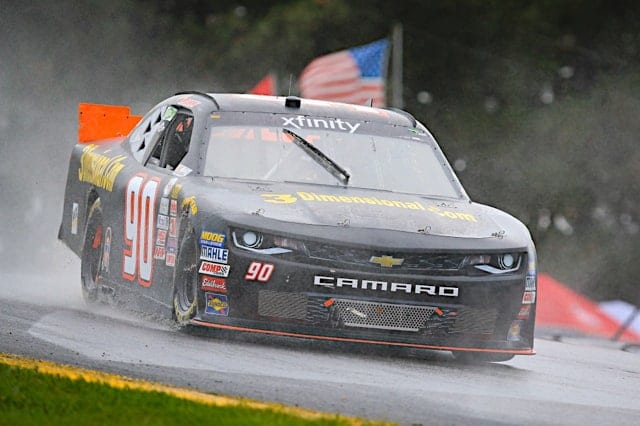 Road-racing ace Andy Lally announced on his Twitter and Instagram pages Monday (Feb. 12) that he will run three races in the XFINITY Series this season for Mario Gosselin.

Lally will drive the No. 90 Chevrolet at Mid-Ohio Sports Car Course, Road America and the Charlotte Motor Speedway roval. Lally also confirmed he is seeking sponsorship for all three races.

“YES! I get to race in the NASCAR XFINITY Series again this year!” Lally tweeted. “Another underdog effort with hard workers behind the scenes & everyone looking forward to the challenge of taking on the big teams.”

Lally currently races full-time in the IMSA WeatherTech SportsCar Championship for Magnus Racing, where he placed sixth in the GT Daytona class in the Rolex 24 at Daytona last month. Last season, he drove an Acura for Michael Shank Racing with Curb-Agajanian. With the Ohio-based team, Lally and teammate Katherine Legge recorded two victories and four podium finishes in 12 races.  Throughout his career, he has a total of 34 career wins between Grand-AM’s Rolex Sports Car Series, the American Le Mans Series and the IMSA Weathertech SportsCar Championship.

Since 2014, Lally has started five NASCAR races, all in the XFINITY Series. In those five starts, he has three top-10 finishes, with a best of fifth last season at Mid-Ohio driving the No. 07 for Bobby Dotter.

The announcement amounts to a reunion of sorts for Lally. Back in 2016, Lally drove Mario Gosselin’s No. 90  to a seventh-place finish at Mid-Ohio through heavy rains and issues with vision.