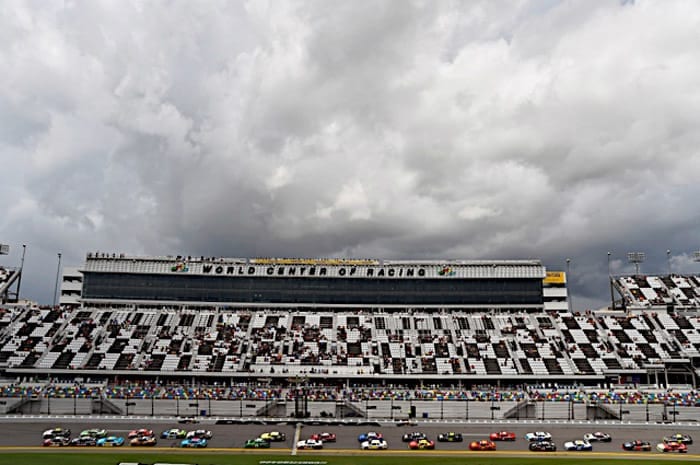 1. Will the Camaro put Chevrolet back in the game?

As a whole, Chevrolet teams struggled in 2017.  Kyle Larson and Chase Elliott carried the banner for the manufacturer, but this make wasn’t represented in the Championship 4 at Homestead-Miami Speedway.  The Camaro, which replaces the discontinued SS in the Cup Series this year, put up numbers in the wind tunnel equal to the Toyota Camry, which was easily the class of the field last season.

That’s all well and good, but the real test will be at the track in coming weeks. The question won’t be answered at Daytona International Speedway, where restrictor plates equalize the field, but rather in the following weeks at Atlanta Motor Speedway, Las Vegas Motor Speedway, ISM Raceway, and Auto Club Speedway. And even then, teams find speed throughout a season, so early results might not stay consistent.

The other piece of this puzzle is how other makes will respond.  Ford has already announced a new body for 2019 (whether that will be a revamped Fusion or another model has not been released). Will Toyota follow suit? While it’s unlikely we’ll see the car wars of the 1990s happen again, manufacturer parity is good for the sport. Let teams find advantages, but they shouldn’t be handed them by virtue of the manufacturers.

Dale Earnhardt Jr. isn’t the only top name to step away from racing in the last few seasons. Fans have bid adieu to Jeff Gordon, Tony Stewart, Carl Edwards, Matt Kenseth and, after this week, Danica Patrick, all very popular drivers and all in a very short span of time. Earnhardt, though, was some fans’ last link to a bygone era in the sport and, as its most popular driver, had a huge number of loyal followers.

The big question is how many of those fans will fade into the sunset now that their favorite has hung up his helmet for the last time.  Will the ratings decline that has plagued the sport be even steeper this year?  Or will most of Earnhardt Nation stick with the sport, perhaps choose a new driver to pull for, even though it surely won’t be quite the same? It’s hard to say whether the recent exodus of drivers has contributed to ratings falling in 2016 and 2017; ratings had been dropping off anyway, and all they take into account is how many people tuned in, not why they didn’t.

It’s hard to believe that some fans won’t call it a career and that many haven’t already done so as their drivers age out or are replaced.  While Kyle Busch complained recently that NASCAR is promoting its youngsters more than the veterans, for long-term stability, that’s what the sport needs to do.  There are many promising drivers, and for fans to stick around, it makes sense to get them interested in a driver who’s going to be around for years to come rather than a veteran who will leave them in the same boat in a couple of years.  That’s not favoritism from NASCAR’s standpoint; it’s the reality of navigating the sport in a post-Earnhardt era.

3. How many first-time Cup winners will we see?

Again, the sport has some incredible talent rising in its ranks. While there are at least half-a-dozen youngsters who can break through, there are four with a realistic chance of doing it this year.

If Chase Elliott doesn’t win in 2018, and probably early on, it will be a shock.  He came so close so often last year and has the look of a driver who, once he gets the first win, will win multiple races. Hendrick Motorsports teammate Alex Bowman could also find Victory Lane, if his fill-in stint in the No. 88 in 2016 was any indication.

Also, it’s hard to believe that three out of four Hendrick drivers have yet to win a race, but rookie William Byron rounds out that trio. While I peg him as a year away from winning, he could surprise.

Joe Gibbs Racing also has a pair of youngsters whose breakthrough wins are a matter of when, rather than if: Daniel Suarez and Erik Jones. Look for at least two of these four to make it happen in 2018.

Along with Byron, give an outside shot to Darrell Wallace Jr. and Ty Dillon.  The biggest obstacle for Wallace is equipment. While his team enters an alliance with Richard Childress Racing, how much help it receives is still a question mark. Dillon, whose Germain Racing team also has a technical alliance with RCR, is in equal equipment to RCR drivers and shares all of its information. He’s the question mark there.

A Monster Energy NASCAR Cup Series field is considered full if all 36 chartered teams show up, not if all 40 possible starting spots are filled. There’s little chance of a chartered team not showing up if they want to hang onto the charter.  But while, for all intents and purposes, fields are full, there’s little competition to make races. That could be a long-term concern. It wasn’t uncommon a few years ago for 50 teams to show up for big races like Daytona and Indianapolis Motor Speedway, with 45 on a weekly basis. Did the threat of going home make teams step up their games all weekend? It did on Friday, at least.

But there should be more to it than car count. Is it really better if 45 teams show up if a large number of them are uncompetitive? Quantity doesn’t translate into quality. Right now, there are more teams capable of competing for top finishes now than ever.

Getting strong, competitive new teams into the sport needs to be on NASCAR’s radar as top owners age. But just having a high car count for the sake of making qualifying exciting serves no purpose. In the short term, making the racing as good as it can be for the teams already at the track should be a priority.

5. Is there room for innovation anymore?

It’s NASCAR’s job to keep the sport fair. And, to give credit where it’s due, they have tried. This year, a couple of pit road moves happened that should benefit smaller teams in particular. For starters, standard air guns and fewer crew are allowed over the wall, along with trimming at-track personnel. The jury’s still out on cutting a crewman (a seven-person pit crew is not so far in the past it’s faded from memory, and now we’re down to five) because there are now 40 crew members without jobs. But the air gun rule was smart. A team with 10 people doesn’t have the time or money to spend souping up impact wrenches. The rule makes pit stops come down to the five over the wall and not a doctored-up tool.

I only have one concern here. In the last 70 years, teams have stood out because they were able to find a bit of speed everyone else left on the table. A shock and spring combination or a gear choice might mean the difference between winning and second place. Unfortunately, NASCAR has taken much of that away by mandating decisions, not leaving them to teams.

That’s not saying NASCAR should tolerate cheating, because they shouldn’t. But opening up some places for teams to work on would only help competition. Equal cars are great on paper, but equal cars can’t pass each other on the racetrack — faster cars do. Giving teams some areas to make choices and find their own speed is what the sport should be about.

That’s what makes winning about people, not the machinery.

Th Dillon will never win a cup race, never. His talent level is that of joke Danica. Bubba is needing sponsors for 29 races, so what happens after the first 7 races, Richard won’t foot the bill, will they fold. Bubba has zero xfinity wins, speaks to his talent by itself.

my quess is that either nascar or GM will make sure that a sponsor happens to show up to help RPM. THey cant afford to take its course.