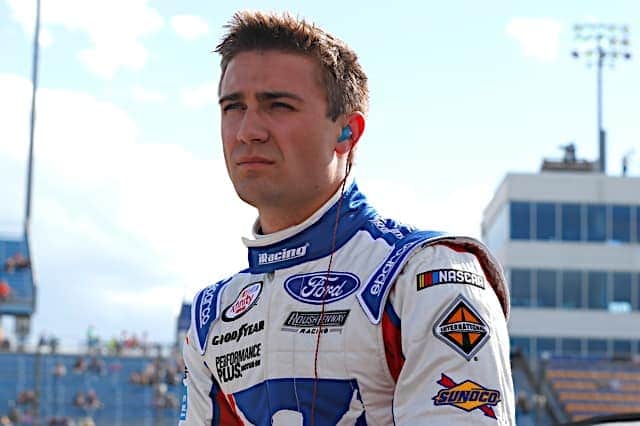 Over the past few years, Ty Majeski has become well-known for his short track skills.  His track record over that time period quickly caught the eye of Ford and Roush Fenway Racing. Winning three straight ARCA Midwest Tour titles against difficult competition and claiming the pole at the Snowball Derby will do that for you.

After moving from Wisconsin to North Carolina to work in the motorsports industry behind the scenes, Majeski was able to earn a part-time ride last season with Roush Fenway Racing in the NASCAR XFINITY Series.  In three starts, Majeski’s best finish was a 10th at Homestead-Miami Speedway.

For 2018, Majeski faces a new adventure. He’ll still have a late model schedule of 12-20 races, but that comes with 12 starts in Roush Fenway Racing’s No. 60 (shared with Austin Cindric and Chase Briscoe) in the XFINITY Series.

However, Majeski’s first crack at XFINITY in 2018 doesn’t come until Bristol Motor Speedway in April, so he’s got to keep up his racing chops between now and then.

Enter the third facet of his schedule. In December, Ford Performance announced that Majeski, Cindric, Briscoe, and Cole Custer would compete in the BMW Endurance Challenge at Daytona, the season opener for the IMSA Continental Tire SportsCar Challenge (CTSC).

Of the NASCAR prospects, Majeski had the least experience making right turns.

“I have virtually no road course experience at all,” Majeski said in a press release at the time.  “I’ve been on one road course my entire life, and that was this past summer when I was sent out to the Ford Performance Driving School in Utah. Outside of that, I have not been on a road course, so this will be great for me to get some experience and be around people who know a lot about it. ”

Regardless of his level of experience, Majeski was not exactly brimming with confidence going into Daytona International Speedway.  Multimatic Motorsports had a king in the cards, though.  Majeski and Custer were teamed up with 54-year-old Scott Maxwell, a multiple-time champion in the Grand Sport class, most recently in 2016.

Majeski had nothing but great things to say about Maxwell.

“Scott’s a great guy,” Majeski told Frontstretch prior to qualifying.  “Any questions that we have, he’ll be the first person to answer them.  He’s been a great help to all of us Ford drivers so far.”

Despite having a veteran sage on his side, road racing was still a completely different animal for the young gun.

“It’s a different world,” Majeski continued. “Obviously, this is my first time on a road course with other cars, so it’s definitely different for me.  It’s going to be a whole new ballgame starting the race.”

Unfortunately for a driver in need of seat time, Majeski didn’t get much time behind the wheel. The No. 15 Ford Mustang GT4 broke a water pump during practice, making it very difficult for the rookie racer to get a feel for the car.

Qualifying went much better. The three Multimatic Motorsports Mustangs got on track together and turned some quick laps.

“We went out there in a three-car draft with my teammates [Cindric and Patrick Gallagher],” Majeski said.  “I was leading the way.  Overall, it was a really good run for all of us.  We all qualified right in a row here, so I’m looking for a good race.”

Despite the confidence, Majeski was still a little unsure about what the event was going to look from his point of view.

“I don’t know what to expect on the start [with regards to] how hard these guys go,” Majeski said.  “There’ll probably be some comers and goers like there is in any kind of racing, so I’ll just take the race as it comes.”

The withdrawal of Rennsport One’s No. 18 Porsche boosted Majeski up to the eighth starting spot. From there, Majeski had a great beginning of the race, moving up into fifth on the first lap.

Once there, Majeski settled into a rhythm, hitting his marks. He proved to be a quick learner. Majeski’s fourth lap of the race turned out to be the fastest lap of the whole four-hour event for the No. 15.  Neither Custer nor Maxwell could beat Majeski’s lap time.

30 minutes in, Gallagher’s No. 8 stalled on the backstretch to bring out the first full course caution of the race.  Majeski pitted for tires and fuel but stayed in for another run.

From there, Majeski continued to move up the order. Early in the second hour, Majeski moved the No. 15 Mustang into third overall behind the Porsches of Dillon Machavern and Stevan McAleer.

The final run of the race ultimately came down to tire management and outright speed. Unfortunately for Multimatic Motorsports, the No. 15 Mustang didn’t seem to have the speed late. Ultimately, Majeski, Custer and Maxwell had to settle for third overall at the finish.

But for this young driver, a podium in sports cars was still something to be proud of.

“It was really good,” Majeski told Frontstretch after the race. “I can’t complain ending up on the podium. The Ford Mustang was fast all day. We tried to stay out of trouble early… and it worked out.  Handed off a healthy car to [Custer] and [Maxwell].  [Maxwell] was able to bring it home for us.”

Maxwell was happy with the performances of both Majeski and Custer in Daytona.

“They were fantastic.  You couldn’t ask for more,” Maxwell said.  “Not only were they fast, they were very competitive. They were great in traffic, and most of all, they handed me a great car in the end. They did everything they were supposed to and more.”

Finishing third in your first road race of any kind is an excellent debut by any means. It will not be the only CTSC race that Majeski will compete in this season, but just how many events is still up in the air at the moment.

At press time, Ford Performance is currently figuring out which races Majeski can run in and around his XFINITY and late model schedules. Majeski said he plans on running nine of the 10 events, but that isn’t necessarily confirmed.

Regardless of whatever Majeski’s CTSC schedule ultimately looks like in 2018, he can go forward with two facts in the back of his head: that he is plenty capable of running competitively on road courses and that he can adapt quite well to nearly anything that can be thrown in his direction.