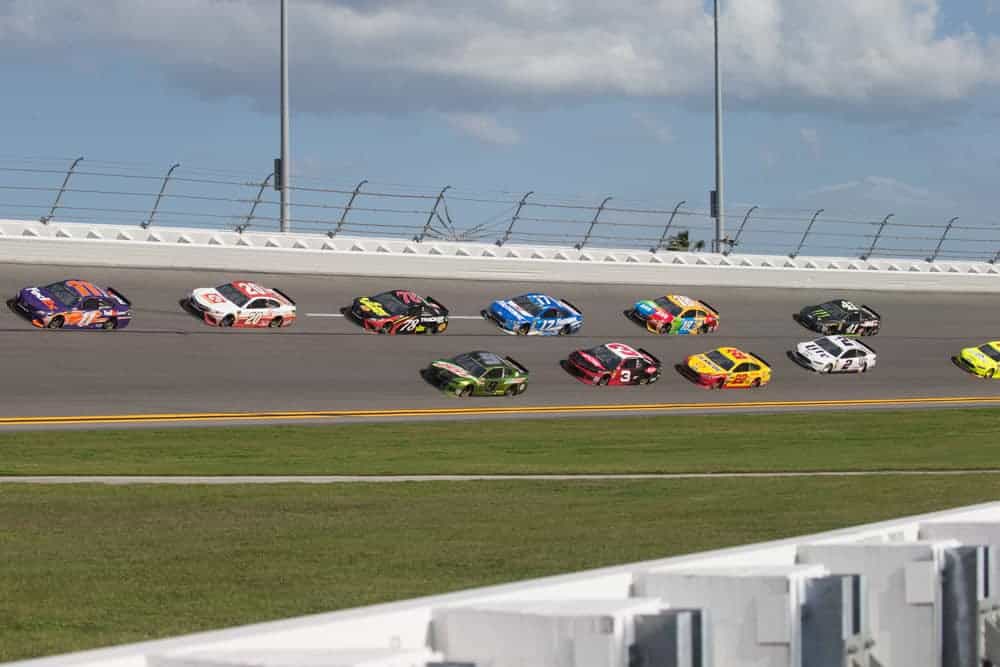 Is there reason to worry about the car count?

OK, the headline might be a bit of an over-exaggeration and a hyperbole to what this situation means, but it still is a bad sign that only 40 cars entered the Daytona 500.

Of course, the first issue that arises with the small entry list is that all of the drama of the Can-Am Duels has been eliminated.

We won’t get that beautiful moment where Brian Keselowski gets pushed by his brother Brad Keselowski to barely qualify for the Daytona 500. There won’t be a moment as exhilarating as when Kenny Wallace used the side draft to get around Kerry Earnhardt at the finish line for the final transfer spot.

It was a nice touch putting points on the line to the Duels’ top 10 finishers. But if you are a driver who is not competing in every race, like Danica Patrick or Brendan Gaughan, then you have no reason to put any effort into those races. Those teams would be foolish to even stay in the lead draft during the Duels, as the risk is now greater than the reward.

As a result, we will have snoozer Duels with almost as much single-file racing as Formula One.

This is the smallest entry list in the history of The Great American Race.

We’re talking about a race that had 68 cars compete in 1960 and had nine more that fail to qualify. The entry lists used to be so big that more than 30 teams competed in the duels in the late 1960s and early 1970s.

Some, including NASCAR Executive Vice President and Chief Racing Development Officer Steve O’Donnell, have defended the smaller entry list by saying that this year’s Daytona 500 will have more cars in the field capable of winning than ever before. That may be the case — I don’t think it is — but that claim is irrelevant to the issue at hand because this problem bares weight on the entire season.

The Daytona 500 is the biggest race on the NASCAR schedule. It is a crown jewel in the sport, and one of the few that attracts the attention of the most casual fans.

It has always had some of the best ratings, highest attendances, and largest purses. The latter of the three is the reason so many cars used to show up. There has nearly always been a severe drop-off on the entry list from the Daytona 500 to the race that follows it.

The week after 77 cars battled to get into the 1960 Daytona 500, only 21 showed up to the next race at Southern States Fairgrounds in Charlotte. 69 teams came to the 1988 Daytona 500, with 27 failing to qualify. The next race at Richmond Raceway had 40 entries. Last year, it went from 42 cars at Daytona to 39 the next week at Atlanta Motor Speedway.

There is expected to be a decline in entries at Atlanta this season as well, as the lone entries of Beard Motorsports, Ricky Benton Racing and Gaunt Brothers Racing are supposedly only doing a few races this year past Daytona, if that. Don’t count on the Phoenix Air Racing car being at the track every week either.

If no new teams show up, that narrows us down to only the 36 charter cars next week. Oh, and who knows if all of those teams will even make it?

No one knew until a few days before qualifying whether or not BK Racing was going to bring its No. 23 Toyota. With the team currently in a legal battle, the status of this team remains one of the greatest mysteries in racing.

Then there is StarCom Racing, which bought a charter in the off-season and could potentially grow weary of losing money for 38 straight weeks. Also, I’m not convinced that Darrell Wallace Jr. has sponsorship for the whole year. Other questionable teams include Rick Ware Racing and Premium Motorsports.

So, tell me again how the charter system is helping the sport. The car counts are going to continue to decrease until NASCAR comes up with a spending cap or an actual cost-saving solution rather than removing one crew member. – Michael Massie

A Monster Energy NASCAR Cup Series field consists of 40 available starting spots. Since only 40 cars showed up to attempt to qualify for the Daytona 500, all of them are guaranteed a place in the show. And now, people are running around as if the NASCAR sky is falling.

First, it’s much less stressful for the teams to know they are in the show. Of course, long time fans know the importance of this race. However, one must also understand that the Daytona 500 is the only event with a 3 month lead-up. The amount of preparation that gets sunk into a team’s 500 car can be summed up in hundreds of hours and hundreds of thousands of dollars. Maybe more, depending on the team. Give them time and money and there’s no surprise that they’ll spend every bit of both in pursuit of the sport’s grandest single day prize.

The hope of the new season rests on their four wheeled chariot. No detail is overlooked. If a wingnut doesn’t sit quite right, put on a new one.

A weld didn’t come out perfectly? Redo it.

After all, this is the Daytona 500 car. It has to be perfect. So after all of the painstaking finesse, there’s a comfort in knowing that the car will race on Sunday.

Additionally, there are companies, programs, and other sponsor organizations who put a lot of money into financing the efforts of each race team. Someone wrote a big check to ensure that their logo would be present during The Great American Race. Losing out on a starting position means a few things.

That sponsor isn’t getting everything they paid for. If the deal included the 500, it was likely a huge selling point in securing the arrangement. Secondly, missing the race could present a significant obstacle during future negotiations with potential sponsors. If you didn’t get them in the show this year, what is their level of faith in you to make it happen next year? With sponsorship being the lifeblood of a team now more than ever, jeopardizing such an essential asset is quite the risk.

Just how important is it to get a sponsor in the Daytona 500? In 1997, owner Felix Sabates and driver Joe Nemechek came to Daytona needing to qualify their way in. As a new team with no owner points from 1996, they had no safety net for their new sponsor BellSouth.

Nemechek did not qualify for the 500. Sabates went to Phil Barkdoll, a grassroots racer who had secured a starting position for the race. Sabates bought Barkdoll’s ride, car number and all, to put Nemechek in the car and BellSouth on the hood. It was undoubtedly a massive expense but completely worthwhile to ensure Nemechek would be able to represent BellSouth in the Daytona 500.

It’s also important to remember that every driver has fans. No one wants to see their driver miss the race. In 2005, Scott Riggs finished fourth in the Daytona 500. The following year, he missed the race. Valvoline, his primary sponsor, was no doubt disappointed.

Chances are that his many fans were as well. But what about his friends and family? Or perhaps the people of his small hometown in North Carolina? It’s possible that some of them were only going to watch the Daytona 500 because Riggs was going to be in it. Without his participation, they may have made other plans for that Sunday afternoon.

While it may be a sign of the times that fewer cars are entered on Sunday, I simply can’t buy into the idea that everyone entered being guaranteed a starting spot is in any way detrimental. No one will have their off season dreams crushed. No one will pack up their equipment with that sinking feeling in the pit of their stomach that they let someone down.

“First, it’s much less stressful for the teams to know they are in the show. ”

As a fan, why does that matter to me? And how does that make me more likely to watch two qualifying races that really don’t matter?

Wayne Taylor
Reply to  Bill B

Totally agree with Bill B. Also some of the “ungrateful acting” drivers seem to have the idea that they would still have a “job” and still make lots of money no matter how many fans quit watching…i don’t understand that. No fans equal NO MORE RACING. NASCAR NEEDS to realize , no matter how bad it sounds, that over the last few years they have alienated thousands and thousands of their fan base. I’m sick and tired of ignorant rule changes every single year and watching “THE CHASE” when all the media coverage of drivers I like gets less and less…Watching everyone move out of the way for FOUR cars at Homestead wound it up for myself. And that is so sad to me. But NASCAR wants a 18-30 year old fan base…and THE FACT IS that their biggest fan base is/WAS 30 to 70 and older. But they do have the fans of all the 18 to 25 year old drivers! When i personally heard a cocky driver (not naming names) say “F#$% off” last year over an autograph on a Vietnam veteran’s $150 race jacket it made me physically sick to my stomach. But that’s your new NASCAR. SAD.

still means that about 20 cars will end up torn up. segment racing will guarantee that!

You have to remember that the charter system is not designed to encourage new entries. Rather it is designed to discourage it. The team owners and those that back them have no desire to share their piece of the pie any more than they have to.
I suppose the only question is whether it effects the quality of the racing. To date there is no conclusive evidence one way or the other. However I suspect it contributes to the boredom factor some of us complain of.