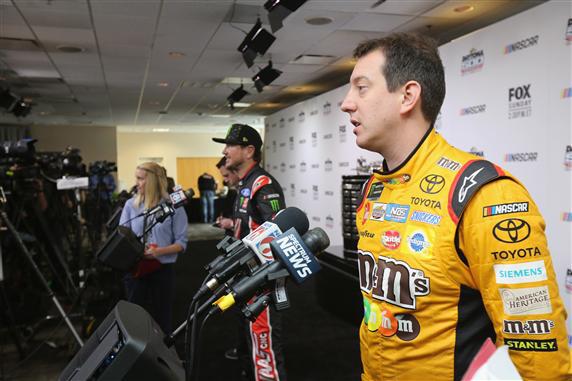 More times than not, NASCAR Media Days are not all that newsworthy.  However, Wednesday’s Daytona 500 Media Day sparked some controversy.

Each driver made their respective rounds from different medium to different medium. But the afternoon ended with a bang, with soon-to-be the most recent retired driver Danica Patrick.

1) Patrick, who will be competing in her final NASCAR race on Sunday, announced during her media availability that she will be running her final Indianapolis 500 with Ed Carpenter Racing.

Patrick’s comments caught everyone, including herself off guard, as she appeared annoyed with herself for the remaining of her availability. What started off as a final, laugh-filled farewell get together with the media, ended with the sixth-year driver storming away.

“Actually I didn’t have time to meet up with Ed and the people that,” she said.  “Oh, did I say that out loud? Did I do that? Oh well. I’ve never done that in my career.”

In a follow-up question regarding what she expects out of the event after not competing in the event since 2011, she gave a quick response.

“It’s more downforce than when I raced,” she said. “It’s less than they had before, but it’s more than what they had when I raced. I think I’ve always done well with downforce. I better shut up and leave. I’m going to be in trouble.”

Ed Carpenter Racing will field three entry’s into this year’s Indy 500, with Patrick, team owner Ed Carpenter and Spencer Pigot. The rumored deal was scheduled to be announced next month at the Indianapolis Motor Speedway Hall of Fame Museum.

2)  New to NASCAR in 2018 is driver’s data being available to every other driver in the field. It was a hot topic at the Media Tour in January and even more so on Wednesday as the 2018 season is here.

In previous seasons, the broadcast companies (FOX and NBC Sports) have traced how long a driver is on the throttle, brake and how much they are turning the racecar. It gave the fans an inside perspective of what it was like to drive like one of their favorite drivers.

With data being available to everyone, it’s not one of the most well-liked rule changes in recent memory, especially from veteran drivers.

“It’s filtered and it’s so accurate I can see exactly what my teammate Kevin Harvick is doing on a printout or my tablet that I go and review different race notes about,” Kurt Busch said. “I’m hearing that other teams have the ability to look at other teams, so that’s crossing the line. That’s where NASCAR is blaming the manufacturers, manufacturers are blaming NASCAR.  They’re saying that the drivers should have known about this, and there’s a lot of confusion going on about the data sharing.

“I would like to give [the data] it to the fans to see it, so they can digest it at a certain level, but to have the other competitors be able to really zero in and see exactly what’s going on, that’s absurd.”

2015 Monster Energy NASCAR Cup Series champion Kyle Busch also weighed in on the hot topic, mentioning that it’s been a discussion within the driver’s council.

“It’s sharing all the driver traces, so anybody can see my driver trace any time they want to now,” Busch said. That’s a big issue with me especially. Some of the other drivers have also voiced their opinion on that. We’re still trying to work on that.

“I’ve spent 13 years in this sport to figure out how to drive a racecar, make it go fast, do the things I do to win races and championships. Now you’re going to hand all that on a piece of paper to a young driver, they’re going to figure it out, as long as they know how to read it.”

Kyle Larson, who is entering his fifth full-time season in the Cup Series in indifferent about the new rule change, admitted the same drivers will end up in Victory Lane.

“I still would prefer to not be able to look at other people’s stuff or have people look at my stuff,” Larson said. “It could go a lot of ways.  I think if I looked at Kyle Busch’s data, and I’m like, I run in the corner further than him, I get back to the gas sooner than him, and he’s got more RPM at the end of the straightaway than I do, I think it’s going to make me disappointed or vice versa, him be disappointed in his engine or whatever, and then somebody will go to NASCAR, and then our stuff will be even more similar, and the cars will just get more similar and more similar, and it’ll be harder and harder to pass. I would rather all of us go up seeing zero data.”

3) In last week’s Advance Auto Parts Clash, Ricky Stenhouse Jr. was black flagged by NASCAR for passing below the yellow line, a rule that has been enforced at Daytona and Talladega for over a decade. In this instance, the No. 17 car had a huge run and the No. 18 machine made a late block, but by advancing his position, Stenhouse was called to the pits.

Stenhouse, who won a pair of restrictor plate races in 2017 claims that the team went to NASCAR, but has not heard anything back.

“I guess the next time somebody gets to the inside of me I’ll force them below the yellow line and then they’ll have to pit and they’ll be in the same position that I was in,” he said. “If that’s the way they’re gonna call it, then I guess we’ll race that way.  We’ll see if they get back to us before we race tomorrow.”

Stenhouse admitted to advancing his position, but had nowhere to go but below the yellow line.

“I was in the process of advancing it before I got below the yellow line, but I would definitely say that I advanced it,” Stenhouse said. “I think we all thought that in the rule if somebody forced you below there that they would be penalized and not yourself, so that’s what I had in my mind when I went down there. They did say that you could give it back, but nobody told us to give it back until they told us we were black-flagged, so better communication would be nice.”

Brad Keselowski, winner of The Clash chimed in on the call, claimied he doesn’t care what the rule is.

“If there’s a  yellow line or if there isn’t a yellow line I’ll race either way,” he said. “Sometimes it feels like I was saying on Sunday, there are maybe too many rules, but I’m not sure that’s a bad one.  I don’t know.  I’ve re-watched one of the races from ’98, where they made the rule and I was saying to myself as I watched, ‘Oh yeah, I forgot what it was like before that.’  It’s kind of like the yellow flag rule, where you can’t race back anymore.  I think there might be some merits to it.”

Drivers who commented all had one thing in common — wanting consistency and are anxious in seeing how the yellow line rule is called for the remainder of Speedweeks. The first Can-Am Duel is scheduled to go green at 7 p.m. ET on Thursday.

Nothing Danica does is by “accident.”