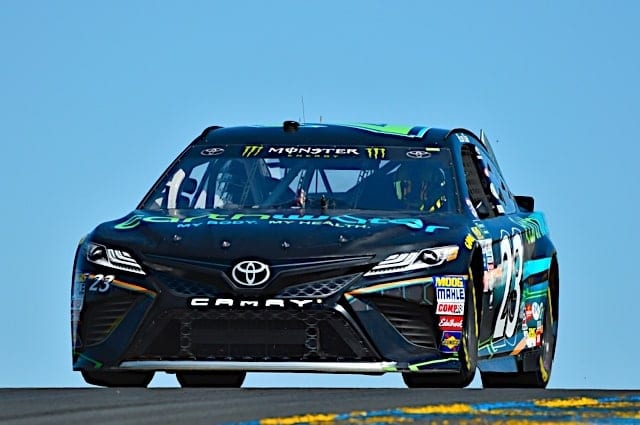 BK Racing has acquired primary sponsorship for the Daytona 500 from EarthWater, a company that sells mineral-infused water products, the team announced Tuesday (Feb. 13).

Team owner Ron Devine is happy to have EarthWater back in the fold.

“BK Racing is excited to have EarthWater return as a sponsor for the 60th Annual Daytona 500,” Devine said in a press release.  “To have EarthWater on the No. 23 Toyota Camry, with Gray Gaulding behind the wheel for the Daytona 500, is a match we look forward to seeing again.”

This will not be the first time EarthWater has sponsored the team.  The Texas-based outfit debuted on the No. 23 Toyota at Sonoma Raceway last June.  Alon Day made his Monster Energy NASCAR Cup Series debut with the EarthWater colors on the 1.99-mile road course.  Day started and finished 32nd.

Later on in the season, EarthWater returned as primary sponsor of the team’s No. 83 Toyota for Gaulding at its home race at Texas Motor Speedway.  Gaulding finished 40th after blowing an engine.

At ISM Raceway, EarthWater was a co-primary sponsor on Corey LaJoie‘s No. 23 with Fresh Beards.  There, LaJoie finished 31st.

In addition to its primary sponsorship, EarthWater also served as the official water of BK Racing in 2017.  That will continue in 2018 as well.

“Our partnership with BK Racing means more to us than racing, they’ve become part of our family,” Riley said.  “That’s how we see BK Racing and NASCAR, it’s a collaboration.  It’s a perfect fit.  We are excited to be on the No. 23 car and to stand behind Gray Gaulding on and off the track.”

I suppose this means that regardless of the results of the hearing, that BK will have a car in the 500.

“Official water of BK Racing”, Just when I think I’ve seen everything.