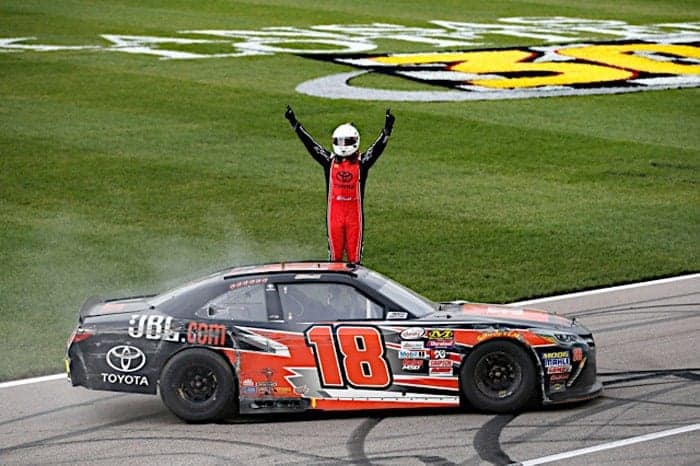 Another off-season has come and gone and the XFINITY Series is set to take to the high banks of Daytona this Saturday. As prestigious as the World Center of Racing is, the race that opens the season doesn’t tell the fans how the season is going to turn out.

2017 was dominated by Joe Gibbs Racing and JR Motorsports. The latter had a combined six victories between its four drivers, with William Byron ending up the series champion. With a trophy in hand, the 20-year-old Liberty University sophomore has graduated to the Monster Energy NASCAR Cup Series.

Joining Byron in the Cup Series is Darrell Wallace Jr., who at this time last season, was slated to run most of the XFINITY schedule. After an 11th-place finish at Pocono Raceway in June, Roush Fenway Racing shut down the No. 6 team, leaving Wallace without a ride. That was the first of many changes.

At Homestead-Miami Speedway, Brendan Gaughan confirmed to Frontstretch that he was done competing full-time in NASCAR. His then team owner Richard Childress also admitted that the organization was scaling back from five full-time teams in 2017 to just three this season.

Despite drivers jumping ship to the Cup Series and some stepping away from the sport full-time, the XFINITY Series saw a plethora of changes over the off-season, though it’s main players from 2017 staying in tact with their respective organizations.

Elliott Sadler won the regular series championship in 2017, earning an additional 15 bonus points in each of the first two rounds of the playoffs. The No. 1 team is heading into the season with its third consecutive season with the same driver-crew chief lineup with Kevin Meendering leading the way.

Sadler re-joins JR Motorsports with fellow NASCAR veterans Justin Allgaier and Michael Annett for another shot at the title. The No. 7 team is coming off a career year in which Allgaier posted a pair of victories, while leading 495 circuits, the most of all XFINITY regulars.

The organization adds Tyler Reddick to the mix in 2018, after picking up his first-career victory at Kentucky Speedway in mid-September for Chip Ganassi Racing. In 18 races last season, the California native led 87 laps.

Matt Tifft will be hopping over to RCR to pilot the No. 2 machine, joining Championship 4 contender Daniel Hemric. As rookies last season, both drivers made the playoffs, and Hemric won a pair of stages. Tifft was hitting his stride at the end of the year, recording seven top 10s over the final eight races of the season.

Brandon Jones will bring his talent to the No. 19 team at JGR after a disappointing sophomore season in the series. In 2016, he made the playoffs in his rookie season for RCR, posting 12 top-10 finishes, compared to three, one season ago.

By dominating the season-finale at Homestead, Cole Custer ended his rookie season with a trip to Victory Lane. Heading into the new year, he is one of the favorites for the XFINITY Series championship, especially now that Stewart-Haas Racing has a year under its belt in the top preliminary division of NASCAR.

Ryan Reed is returning to Roush Fenway Racing for his fifth consecutive full-time XFINITY season. He kicked the 2017 campaign off to a bang by winning at Daytona and leading nine laps. Over the next 32 events, the No. 16 car placed inside the top 10, six times.

RFR will be running a full schedule with the No. 60 machine, piloted by three up-and-coming drivers. Austin Cindric will get the nod at Daytona, while Ty Majeski and Chase Briscoe will both see action as well. Cindric will be competing full-time between his stint at Roush and the Nos. 12 and 22 for Team Penske.

In what might have been the surprise of the off-season, Ryan Truex will replace Blake Koch at Kaulig Racing for the entire 33-race schedule. Truex is coming off a standout year in the Truck Series, finishing ninth in the season standings. The New Jersey native hasn’t competed in an XFINITY race since 2015.

Kaz Grala will move up from the Truck Series to compete for JGL Racing after winning the season-opening event at Daytona last year. Joining Grala at JGL Racing is Dylan Lupton for at least 21 races.

After a disappointing rookie campaign, Spencer Gallagher will return to the series for GMS Racing. During his first year in the XFINITY Series, he had just one top-10 finish (10th) at Richmond Raceway in April.

Jeremy Clements surprised the NASCAR universe at Road America last August, recording his first series victory. The No. 51 team qualified for the playoffs, but had an early exit after Charlotte in October.

JD Motorsports is running full-time teams in 2018 with Ross Chastain leading the way by entering his fourth full season with the race team. He will be joined by Garrett Smithley who is returning for his second season with the organization, while Matt Mills and Vinnie Miller will both be competing for Rookie of the Year.

For the third consecutive season the XFINITY Series will have a post-season. In each of the past two seasons, Sadler and Allgaier have made the cut to Homestead, giving them the nod as the top title contenders heading into the new year. However, let’s make some predictions.

Sadler, Allgaier, Reddick, Bell, Custer and Hemric will all get into the playoffs with victories. By moving to JGR, Jones will get into the post-season, with Tifft, Truex, Reed, Annett and Grala all making it in by points.

After Homestead, Christopher Bell will be your 2018 XFINITY Series champion.