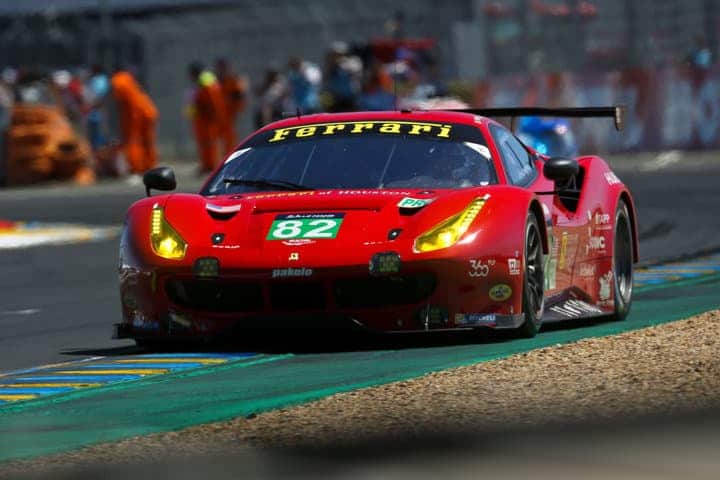 Riley Motorsports (which is running under the name Keating Motorsports due to ACO rules) and Risi Competizione jointly announced the remainder of their driver lineup for their entry in the 2018 24 Hours of Le Mans on Wednesday (Feb. 14).  The two teams will collaborate on a Ferrari 488 GTE entry in the GTE-Am class.

Ben Keating will be joined by his regular IMSA teammate Jeroen Bleekemolen at Le Mans for the fourth year in a row.  The third spot in the team will be filled by 22-year old Luca Stolz.  Stolz primarily races in series such as ADAC GT Masters in Germany, but he recently joined Bleekemolen and Keating in the Riley Motorsports Mercedes at the Rolex 24.

Keating is happy to have Bleekemolen and Stolz on his side for Le Mans.

“We’re happy to have Luca joining Jeroen and me for the 24 Hours of Le Mans,” Keating stated.  “Although he’ll be new to Le Mans, he’s proven himself with us and that he is mature enough to handle endurance racing with both speed and a level head.”

Stolz is looking forward to his debut at Le Mans.

“I am very honored to be asked to drive with Ben and Jeroen at this year’s 24 Hours of Le Mans,” Stolz stated.  “It’s every driver’s dream to compete at Le Mans and for me that’s no different.  Although I’m quite young, I have huge endurance racing experience and I feel ready for Le Mans.  I’m really looking forward to it.”

Keating, who competes full-time for Riley Motorsports in the IMSA WeatherTech SportsCar Championship, earned an automatic spot in the race by winning the 2017 Bob Akin Award.   The Bob Akin Award is given out to the best performing amateur racer in the GT Daytona class.

For Keating, his previous experience at Le Mans has been middling.  In 2015, Keating shared a SRT Viper GTS-R with Bleekemolen and Marc Miller.  That effort ended with a broken gearbox.  Keating has spent the last two years at Le Mans racing in the LMP2 class.  2016 saw Keating share Murphy Prototypes’ open-cockpit ORECA 03R-Nissan with Bleekemolen and Marc Goossens finish 15th in class, 34 laps down.  Last year, Keating, Bleekemolen and Ricky Taylor shared the Riley Mk. 30-Gibson currently owned by BAR1 Motorsports.  However, they were well off the pace and ended finishing 47th overall (20th in the LMP2), the second to last car still on the road.

Bleekemolen, the team’s Platinum-rated driver, has 12 career 24 Hours of Le Mans starts.  He is a past class winner, having claimed the LMP2 class victory in 2008 in a Porsche RS Spyder Evo alongside Peter Van Merksteijn and Jos Verstappen.  His best overall finish was sixth in 2011 while driving for REBELLION Racing.  Since then, his efforts have been a little more pedestrian.

Bleekemolen’s fifth-place finish in GTE-Pro back in 2014 is notable because it came under unusual circumstances.  The team was supposed to race in GTE-Am, but the team’s second amateur driver (Bret Curtis) crashed in qualifying and briefly lost consciousness.  After Curtis was not cleared and his replacement (Sebastien Crubile) was not approved due to lack of laps at night, Bleekemolen and teammate Cooper MacNeil were forced to move up to GTE-Pro and race as a duo.