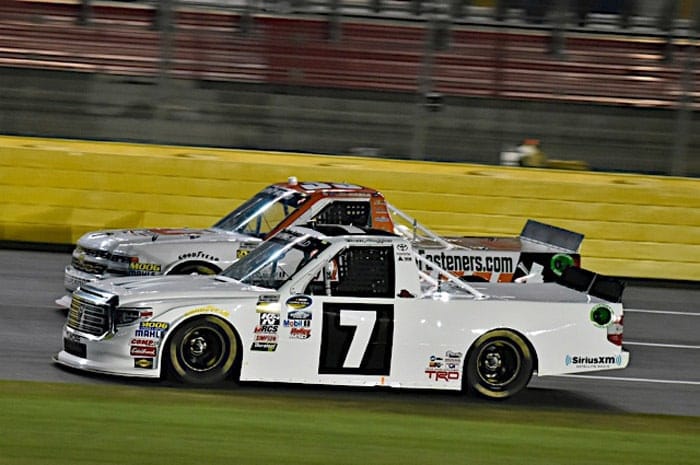 “Ben will draw upon his years of experience across NASCAR’s grassroots and national series to bring valuable commercial and competition insights to our NASCAR Camping World Truck Series,” NASCAR president Brent Dewar said in a release. “With promising young drivers and experienced veterans battling it out in close, side-by-side racing, Ben truly understands from experience that every lap matters and we are excited about his future leadership in this important national series.”

The addition of a former driver in the series to a management role can only mean good things for the future. Forget for a moment that Kennedy has ties to the France family and remember that a fresh head who’s not too far removed from the driver’s seat means there’s someone involved in the higher up decision making that, in theory, should make the right calls for long-term health in the series.

This year marks an improvement when it comes to new full-time teams in the series. Despite the loss of a couple of larger teams, it appears new life has come to the Truck Series. Jordan Anderson announced the formation of his own team late last month. He acquired owner points from Brad Keselowski Racing’s No. 29 team and has partnered with Niece Motorsports, so the new organization will find itself locked into the first few races of the year.

Though it happened early last season, Red Horse Racing will no longer have a presence in the series. Additionally, the season-finale at Homestead-Miami Speedway in November marked the final event for Brad Keselowski Racing. Drivers Chase Briscoe and Austin Cindric both have found rides in the XFINITY Series.

But it’s not just teams that are missing this year. Several drivers have also moved on to different endeavors. Perhaps the one that stands out the most is that defending series champion, Christopher Bell, has made the full-time leap to the XFINITY Series for Joe Gibbs Racing in a move that would have been surprising only if it hadn’t happened.

Additionally, John Hunter Nemechek and Ryan Truex have made the leap to the XFINITY Series. Nemechek will run part-time with Chip Ganassi Racing, while Truex steps into the No. 11 with Kaulig Racing.

When Hattori Racing Enterprises announced it would move forward with a full-time schedule in the 2018 season but without Truex, who arguably played a large role in the success the team found during 2017, the question arose about who would fill that ride. That answer came in the form of Brett Moffitt, a driver who’s often found himself in a substitute role and never really had a shot to compete for a NASCAR championship.

Meanwhile, Myatt Snider, who made eight starts for Kyle Busch Motorsports last season, moves to ThorSport Racing. He will join Matt Crafton, Grant Enfinger and Ben Rhodes, who each raced for the organization last year. Cody Coughlin, who previously piloted the fourth entry for ThorSport joined GMS Racing, along with Dalton Sargeant, bringing the team to four full-time trucks.

Joining Kyle Busch Motorsports to replace departing defending champion Bell is Todd Gilliland. But because he doesn’t turn 18 until May, he’ll only run Martinsville in March and Dover in May before competing in the remainder of the schedule.

One thing that hasn’t changed is the schedule with the usual off-season within a season in March and April.