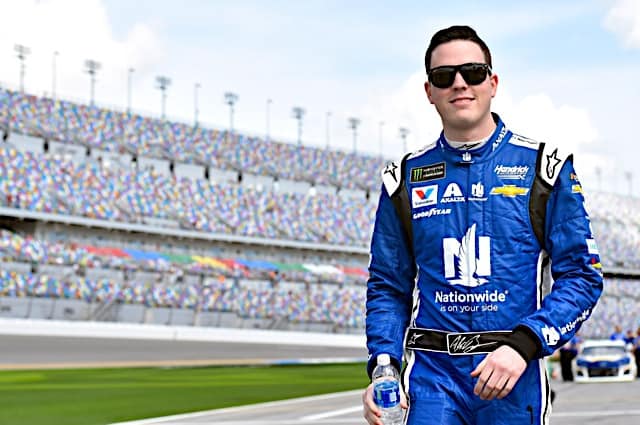 Alex Bowman will lead the field at Daytona for the 500(Photo: Nigel Kinrade/NKP)

Daily fantasy NASCAR is back, which is a great reminder that spring is right around the corner. If you live up north like me, the Daytona 500 will shine a bright light on the weekend and help you forget about the foot-and-a-half of snow on the front lawn.

The front row was set last Sunday for the 40-car field with Alex Bowman winning the pole. The 2016 Daytona 500 winner, Denny Hamlin, will start alongside him. The remaining lineup was finalized following the two Can-Am Duels Thursday afternoon.

When it comes to daily fantasy, Daytona is a different kind of beast. Not only is it NASCAR’s Super Bowl, restrictor plates make the race a total wild card. We hear it said time and time again: anyone can win. For that reason, we will want to avoid trying to single out a driver that we feel will dominate because it hardly happens at superspeedways.

Instead, the biggest statistic to hone in on is position differential. Drivers can make their way from the back of the field to the front at Daytona in just a couple of laps.

When setting lineups for the big race, try to shy away from drivers starting inside the top 10-15. There aren’t as many points to be gained with them as opposed to someone starting outside the top 25.

With those tips out of the way, here are a handful of drivers to keep an eye on going into Sunday’s Daytona 500.

Keselowski kicked off Speedweeks with a win in last weekend’s Advance Auto Parts Clash. In typical Daytona fashion, he started dead last and secured the lead following the competition caution. Then, he led 43 of the 75 laps in what became a commanding performance.

In 2016, Keselowski won both the July Daytona as well as the second Talladega race. In 2017, he captured the fall Talladega event once again. It’s clear he has become perhaps the sport’s best restrictor plate racer, now with a total of six wins at those tracks.

Hamlin, starting from the second spot on Sunday, is a less desirable pick for daily fantasy. But he has the potential to win, which would earn the 46-point bonus your roster covets.

Hamlin won this race in 2016 in a photo finish with Martin Truex Jr. and capped a five-race streak of top-six finishes at Daytona. He also has the sixth-best career average finish at this track among active drivers.

Logano won the Daytona 500 back in 2015 and has since finished sixth or better in three of the past five Daytona races. Similar to his Penske teammate, Keselowski, Logano also won at Talladega in 2016.

Ford and Penske have been the class of the field the past couple seasons at plate tracks. Also keep in mind the manufacturer swept the superspeedway schedule in 2017.

Stenhouse stole the show in 2017 at plate tracks. He picked up his first career Cup Series win at Talladega last May and then followed it up a few months later with a win at Daytona.

Daytona may be the highest we see his DraftKings salary in 2018, but it’s well warranted. Stenhouse has an average finish of 12.3 in the past three Daytona races, including two top fives.

Blaney was the highest-scoring driver in 2017’s Daytona 500 DraftKings contest. He qualified 36th and drove all the way up to second. He did the same thing in the Clash, starting at the back and finishing fourth.

Blaney’s move to Team Penske only makes him stronger entering 2018. The team has also won four plate races the past two seasons, turning the young racer into a trendy underdog pick.

Almirola signed with Stewart-Haas Racing this offseason to replace Danica Patrick. The boost in equipment makes him an intriguing pick this weekend.

The veteran previously raced for Richard Petty Motorsports, which has been a struggling team as of late. Aric also has four straight top-10 finishes at restrictor plate tracks, including three top-fives. His lone Cup Series win came at Daytona in 2014.

One key to Almirola’s success at plate tracks is his patience. He has a knack for avoiding the Big One and keeping his car clean. After crashing in Thursday’s Duel, leaving him near the back of the field (37th) putting him on your roster should be a no-brainer.

Menard is yet another driver who will see an upgrade in performance in 2018. He left Richard Childress Racing to join the legendary Wood Brothers No. 21. They may still be a single-car team but the Woods also have a tight alliance with Roger Penske.

Menard finished both Daytona races inside the top five last season, with starts of 33rd and 24th. The longtime veteran also had success at Talladega. He finished ninth and 12th.

Take advantage of his low salary.

Ragan has been the sexy underdog pick for daily fantasy connoisseurs for as long as he has been available. He has two career wins: one at Daytona and one at Talladega. The second of those victories came with his current team in Front Row Motorsports.

Ragan finished 25th, 10th, ninth, and 10th in the four plate track races in 2017. Of those four, his best start was 20th. That makes him an incredibly underrated superspeedway driver. 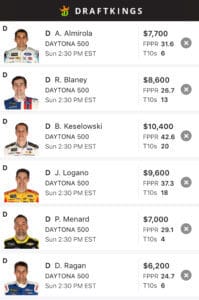