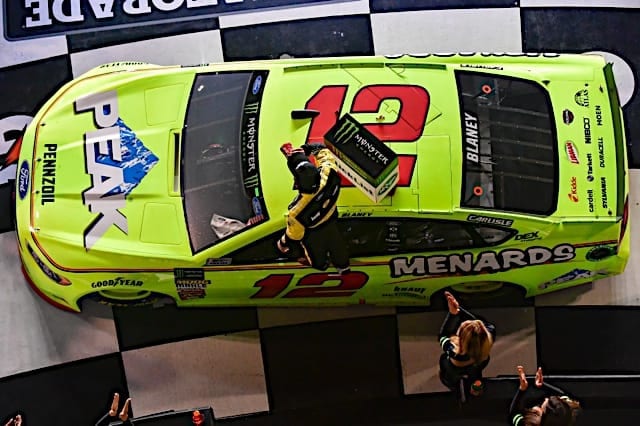 Alex Bowman started the first Can-Am Duel at Daytona International Speedway on the pole, but was quickly shuffled out on the first lap.

The three Team Penske cars maneuvered to the top of the field and claimed the top-three spots, with Brad Keselowski initially leading before Joey Logano took over.

Two-time Daytona 500 champion Jimmie Johnson destroyed his second car of Speedweeks on lap 9. Johnson pulled down, out of the draft, with a left rear tire rub. The tire blew and the No. 48 car slid back up the track into Aric Almirola, destroying both cars and collecting Daniel Suarez.

“A tough start to Speedweeks,” Johnson said to FS1. “I feel terrible for my race team. I’m thankful for all of their hard work and we’ll get that back in the 500.”

Logano led a single-file group in the high line for most of the next green flag run, but Ricky Stenhouse Jr. made several attempts to get the bottom line going to no avail.

On lap 39, Stenhouse Jr. pulled out from drafting rookie William Byron. The air off of Stenhouse’s nose caused Byron to spin out and make contact with the wall.

Stenhouse did the same thing to David Gilliland on lap 48 and it resulted in Gilliland’s No. 92 slamming into the outside wall.

“[I] was just taking the air off of them, trying to slow them down and getting into the corner so that I could make a run…and try to slide up in front of them,” Stenhouse said to MRN. “That’s the way you got to pass when you’re riding around single file…their cars looks like they were a little too loose.”

It seemed that the Team Penske trio would cruise to a podium sweep until Kurt Busch, David Ragan and Stenhouse made a second line work. Ryan Blaney jumped in front of Busch and used the draft to challenge Logano for the lead.

Keselowski briefly left Logano to push Blaney, but then went back up to Logano’s lane. Jamie McMurray was there when Keselowski moved up the track and the two cars collided on lap 58.

Blaney launched out to the huge lead over Logano in overtime with a push from Darrell Wallace Jr. Blaney held off Wallace and won the first Duel.

“I figured [Wallace would] give me a good push, and he did,” Blaney said to FS1. “We came close in The Clash and I didn’t make the right move and we kind of lost that race…I thought about that forever and we learned a little bit from our mistakes.”

Logano came back to edge out Wallace at the finish line for second place. Stenhouse and Busch rounded out the top-five.

Oh Blaney and BUBBA should just profess their love for each other and be done with it. Nothing to be embarrassed about in this day and age, imo. A Power Couple could be just the boost NASCAR needs. Maybe they could be on the same team, not Penske. I am sure RPM would take Blaney! Good to see this early so Brad and Joey don’t hitch their wagon to Blaney. IMO. Not getting a team vibe off of Blaney.

Blaney wanted to win, just like his teammates, and the rest of the field. What did you expect him to do?

I think Roger P has told Blaney don’t worry about your teammates, just go out there and try to win, win, win every race. That will be the best finish for the famous 43 car this year. Nothing new for the SHR #10 car. Why wasn’t Jimmie Johnson criticized for not asking if AA was ok after his wreck?