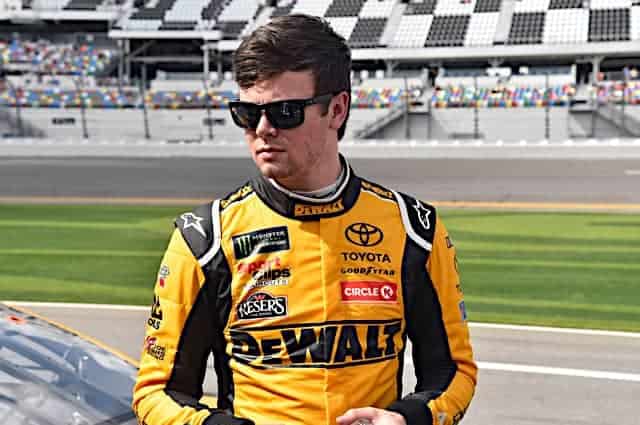 The handling wasn’t there on the No. 20 car, making his second start with Joe Gibbs Racing in a less than a week quite the difficult one.

When eventual winner Chase Elliott got underneath Jones, it sent the No. 20 car spinning down the backstretch. Fortunately, though, he left the incident unscathed, unlike Matt DiBenedetto and Kyle Larson, whose days both due to the wreck.

“The cars are just really hard to drive right now,” Jones said. “It’s just that anybody can put anybody in a really bad aero situation. I felt like I could’ve probably gotten people into a situation where they would spin out, too.”

But Jones did not get into any other incidents throughout the remaining 45 laps of the race. His No. 20 team hit the reset button, looking only forward from there.

He methodically picked his way through traffic, finishing third when the checkered flag flew.

That ? was wild. These things are a handful!! Got good speed just need to get the @DEWALTtough Camry driving a tick better and we should be good.

As Jones begins his sophomore season, he admitted Sunday’s Daytona 500 will be a tough one. He made note that he will be wary of getting out of risky positions quickly during the 200-lapper.

When Jones got out of his racecar, he was greeted by crew chief Chris Gayle and team owner Joe Gibbs, each ecstatic that he survived the incident. A few minutes later, during a post-race press conference, he mentioned how he wants the No. 20 machine to be more stable throughout the remaining portion of the weekend.

Jones will compete in his second Daytona 500 this weekend, hoping to come away with a better result than last year. In his first Daytona 500, he finished 39th after wrecking out on lap 103.